0.75 - miles that make up one lap around Richmond International Raceway.

0.75
Miles that make up one lap around Richmond International Raceway.

1
Car dropped to the back of the field at the start of the race.
(No. 34, Chad Blount – unapproved impound adjustment)

4th
Dave Blaney‘s finishing position at Richmond Saturday night. This is his first top-five finish of the year, and his first top 10 since November of 2005, when he placed sixth at Homestead. The run also marked his first career top five at a track less than a mile in length.

7
Caution flags for a total of 48 laps at Richmond.

8
Career Cup victories for Harvick in 204 starts, including his Richmond win.

17
Number of times I said, “I can’t believe Tony is not in the Chase.”

18
Laps completed in the Chevy Rock ‘N’ Roll 400 by Morgan Shepherd before his “brakes malfunctioned,” relegating him to a 43rd-place finish.

Editor’s Note: Before you leave a comment, please note that teams must be a participant in the USG program to be eligible for this contingency award.

57
Points Matt Kenseth leads Jimmie Johnson by in the driver standings after Richmond… but it doesn’t matter! At New Hampshire, Johnson’s deficit will reset to just five points due to the Chase format.

80
Career Cup wins for Richard Childress Racing, with six of those coming at Richmond.

101
Cup races held at Richmond International Raceway. The first was won by Lee Petty in April of 1953. Back then, the track was a half-mile dirt oval.

248
Laps led by Busch at Richmond, the most of any driver.

775
Career Cup starts for Kyle Petty after the race at Richmond. Congrats, Kyle!

1968
Year the Richmond’s track surface was changed from dirt to asphalt.

1988
Year the Richmond track was reconstructed from a half-mile oval to the 3/4-mile length it is today.

The Frontstretch Staff is made up of a group of talented men and women spread out all over the United States and Canada. Residing in 15 states throughout the country, plus Ontario, and widely ranging in age, the staff showcases a wide variety of diverse opinions that will keep you coming back for more week in and week out.
@Frontstretch
Previous Bowles-Eye View: NASCAR Still Has the Power To Leave You in a State of Shock
Next Doin’ Donuts: 2006 Chevy Rock & Roll 400 a Rambunctious Night in Richmond 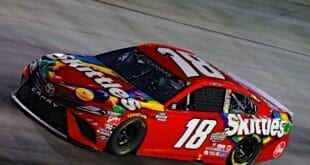