Unfortunately, in the battle for the Top 35, the race was basically running on empty. Only two drivers moved up or down in the standings in our bubble watch, simply changing positions with each other. The other competitors gained or lost points in their battle to stay in a locked-in spot, but didn't do enough to change their place in the standings. Still, there were several drivers who put themselves in better positions after Sunday's action. Let's take a closer look.

Commonly referred to as a “cookie-cutter” Speedway, Kansas was hardly the same old story this Sunday. Between fuel mileage gambles, pit road penalties, and spinouts by several Chase contenders, there was no shortage of action on the 1.5-miler.

Unfortunately, in the battle for the Top 35, the race was basically running on empty. Only two drivers moved up or down in the standings in our bubble watch, simply changing positions with each other. The other competitors gained or lost points in their battle to stay in a locked-in spot, but didn’t do enough to change their place in the standings.

Still, there were several drivers who put themselves in better positions after Sunday’s action. Let’s take a closer look:

Jeff Green and the No. 66 car are classified as the only team to improve their position in owner points at Kansas. It is hard to imagine finishing 30th and being a winner, but Green was able to take advantage of others’ misfortunes to gain a position. The No. 66 Haas CNC Racing team ran in the top 15 early on, then lost the handle on their Chevrolet and never could get it back, finishing three laps off the pace. Still, the 73 points earned by the team was enough to move them up one spot to 31st in the owner standings, 244 points ahead of 36th.

Ken Schrader continued to enjoy the fruits of his new relationship with Michael “Fatback” McSwain. Schrader started 36th, but quickly moved up to the top 10 by lap 60; the No. 21 Wood Brothers Ford then fell back, but remained a solid top-20 car for the rest of the race. Using fuel mileage to his advantage in the race’s latter stages, Schrader was able to run the final 70 or so laps on gas without stopping, a gamble that brought him home in 13th. While it didn’t change the position of the No. 21 team in the Top-35 battle, it did give them 124 points and solidify their position of 29th.

Travis Kvapil started the day in 37th and didn’t improve much during the first third of the race. However, the No. 32 PPI Racing team got lucky, getting back on the lead lap after a caution during green-flag pit stops on lap 131. After that point, the team moved up to the upper-20s and stayed there for the rest of the race, until superior fuel mileage boosted them up into a 19th-place finish. The 111 points garnered for that finish and leading a lap moved the team closer to the Top 35 in points, although they are still in 37th place, 143 out of a locked-in spot.

Sterling Marlin had one of the best days he has enjoyed in a while at Kansas. Although the No. 14 Ginn Motorsports team finished a ho-hum 20th, that was a welcome finish compared to some of the struggles the team has gone through in recent races. Even though the team was never able to tighten the car up enough to make Marlin happy, like several others in this category, they were able to use pit strategy to get themselves a solid finish. Marlin topped off on lap 198 and was able to make the final 68 laps without running out of gas. As a result, the 108 points earned for the finish and leading a lap solidified the team’s 35th-place position in points; they are now 74 points ahead of 36th.

Elliott Sadler was the big loser this weekend, the victim of a pit-road mishap during the first caution of the race. Only 11 laps in, Sadler made a judgment error and slammed into Jamie McMurray while leaving his pit stall, causing enough damage to force Sadler to the garage for repairs. Even though Sadler was able to reenter the race, he finished the day 39 laps down and in 40th position. The 43 points awarded for the finish dropped the No. 19 team one slot in the rankings to 32nd.

JJ Yeley had a short run of good luck this weekend that quickly turned back bad. After qualifying a solid fifth, the No. 18 Joe Gibbs Racing team was involved in an accident on lap 196 that put them out of the race and relegated them to a 41st-place finish. Although Yeley’s team remained 26th in the standings, the 40 points earned for the finish caused them to lose ground to others. Yeley is still solidly in the Top 35, but needs to turn his bad luck back to good, or the situation could become more tenuous.

Turning to a situation that’s already tenuous, Michael Waltrip continued his subpar season Sunday by coming home 35th in the Heartland. Waltrip started 35th and spent most of the day running at the back of the pack, eventually adding insult to injury by smacking the outside wall off turn 2. The 55 points garnered for the 35th-place finish kept the No. 55 team in 38th and dropped them even further behind 35th place in the rankings; no doubt, this group can’t wait to just start running Camrys next year.

Finally, it didn’t take long for Robby Gordon‘s day to go sour at Kansas. Causing the race’s first caution with a spin on lap 10, Gordon never recovered, spending the rest of the event trying to simply finish the race with an ill-handling car. Finishing 36th, the 55 points kept the team mired in 27th place in the owner standings.

ON THE OUTSIDE LOOKING IN

The circuit now heads to the final restrictor-plate race of the year at Talladega. The newly repaved track will make the speeds high and the reliance on car aerodynamics more important than ever. Look for the single-car teams and even two-car efforts that are part of the Top-35 battle to struggle because plate racing still comes down to resources, something these teams just don’t have enough of. For the teams that do make the race, luck will still play a big part… because as everyone knows, anyone can be caught up in the Big One that seems to happen in nearly every restrictor-plate race. Whatever the case, the teams outside the Top 35 that make gains at Talladega will do it the old-fashioned way… they’ll earn it.

What is it that Mike Neff doesn’t do? The writer, radio contributor and racetrack announcer coordinates the site’s local short track coverage, hitting up Saturday Night Specials across the country while tracking the sport’s future racing stars. The writer for our signature Cup post-race column, Thinkin’ Out Loud (Mondays) also sits down with Cup crew chiefs to talk shop every Friday with Tech Talk. Mike announces several shows each year for the Good Guys Rod and Custom Association. He also pops up everywhere from PRN Pit Reporters and the Press Box with Alan Smothers to SIRIUS XM Radio. He has announced at tracks all over the Southeast, starting at Millbridge Speedway. He's also announced at East Lincoln Speedway, Concord Speedway, Tri-County Speedway, Caraway Speedway, and Charlotte Motor Speedway.
@MNeffShortTrack
Previous Busch Series Breakdown: 2006 Yellow Transportation 300 at Kansas
Next Frontstretch Breakdown: 2006 Banquet 400 at Kansas 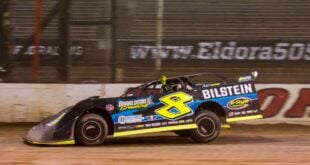 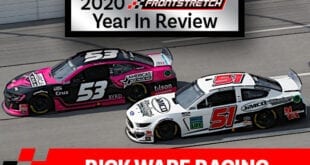