Can we have an Army band for the National Anthem every race please?

Welcome back, Benny! You’re much appreciated; any race with Benny in the booth is so much better!

Yates on the front row at a plate track, some things never change!

While this is NOT real racing, it is sure an exciting event! This year featured over 60 lead changes, with 40 of them legitimate green-flag passes on the track. Now, if we can just get NASCAR to not play GOD with the results… we will be OK.

F for the Mystery Debris Caution

WOW… so it was just a coincidence that the caution flew when Dale Earnhardt Jr. needed to get the “Lucky Dog” pass? Come on, NASCAR, your credibility is going away fast with moves like that!

Guys, we know you are upset but if either of you had won the race, you wouldn’t be whining afterwards. Those non-stop whines are annoying and show that you are both poor sports!

The cool Camo artwork on the front of the car must have been the reason they didn’t mention Stremme all day on NBC. In what has been a long and difficult rookie season, Stremme had an excellent day at Talladega until just 16 laps to go, when the big wreck reared its ugly head. In typical rookie fashion, it seems Stremme has had strong runs but just can’t finish the deal.

B for Mark Martin

Coming through with a strong performance at one of Martin’s least favorite tracks in the middle of all the hoopla over his new ride was amazing! It will be interesting to see the tearful farewell when Martin wins the title before departing Roush Racing after almost 20 years!

A for Brian Vickers

A first winner is a first winner, no matter how that victory comes to you. The last-lap spin of teammate Johnson was just one of those “racing deals,” but will that be the impetus behind Hendrick Racing firing him sooner? 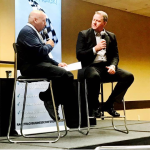 Dennis a.k.a. DMIC has been covering NASCAR racing since 1998. After spending 23 years as a professional weather forecaster, Dennis still didn't know what he wanted to be when he grew up, so he started covering auto racing full time. He is the moderator of the Race Track Business Conference - an all-day educational seminar covering the business of speed - and is the owner of DMIC Media & Marketing where he spends his time mouthing off about all kinds of sports. He is also the play-by-play voice for the professional Ultimate Disc team the Chicago Wildfire of the American Ultimate Disc League. Dennis can be heard every Saturday on The Final Inspection on 105.7FM The Fan in Milwaukee, Wis. talking NASCAR, and you can listen on the Radio.com app.