Former NASCAR Champion and television broadcaster, Benny Parsons, passed away today at the age of 65. On July 13, 2006, Parsons was diagnosed with lung cancer, but in October, he announced that the doctors told him it was gone.

Former NASCAR Cup champion and television broadcaster Benny Parsons passed away today at the age of 65. On July 13, 2006, Parsons was diagnosed with lung cancer, but in October, he announced that the doctors told him it was gone. However, the aggressive chemotherapy that he had undergone during treatment left his damaged his left lung so severely it was unable to function properly.

Parsons was admitted to the Carolinas Medical Center just after Christmas, then later moved to the ICU where he had been up until he passed away.

All of us at Frontstretch would like to send our thoughts, prayers and condolences to the family and friends of Benny Parsons. He was a true champion in every since of the word, and he will be missed.

The Frontstretch Staff is made up of a group of talented men and women spread out all over the United States and Canada. Residing in 15 states throughout the country, plus Ontario, and widely ranging in age, the staff showcases a wide variety of diverse opinions that will keep you coming back for more week in and week out.
@Frontstretch
Previous NASCAR Community Reacts to the Passing of Benny Parsons
Next Best of Nikki Krone: Let’s Not Forget Kenny Irwin Jr. And Tony Roper 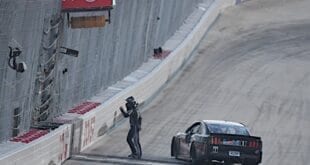 The Yellow Stripe: Drivers I Never Got to See, But Wish I Had