OK, I must admit that the headline is a bit misleading. The members of the press that covered Brian France's state of the sport address didn't really get wet, but they were showered with something... and I'm sure France would tell them it was rain if he were asked. If you still don't get what I mean, let me explain it this way... it's not something you would ever want to be drenched with.

Voices from the Heartland: Press Corps Drenched During France’s “State of the Sport” Address? (Part I)

Frontstretch Staff February 14, 2007 Jeff Meyer, Voices From the Cheap Seats Comments Off on Voices from the Heartland: Press Corps Drenched During France’s “State of the Sport” Address? (Part I)

OK, I must admit that the headline is a bit misleading. The members of the press that covered Brian France’s state of the sport address didn’t really get wet, but they were showered with something… and I’m sure France would tell them it was rain if he were asked. If you still don’t get what I mean, let me explain it this way… it’s not something you would ever want to be drenched with. (I didn’t think my editors would let me get away with a racier headline, and it turns out I was right).

At any rate, the following are a few excerpts from the address, along with some commentary provided by me. I’ll leave it up to you to decide what is making you wet.

“I want to also talk a little bit about our ongoing concern, initiative, emphasis on leveling the playing field, lowering that barrier, keeping those costs down as much as possible. I think we like some of the early results we’re seeing from the tire leasing program we had last year, how that worked out, to lower some costs, we’ve recently renewed Goodyear for a multi-year commitment. They’ve been the longest-standing current partner in NASCAR, and we’re glad to have Goodyear back for many years to come.”

Please note that these are actually quotes, not bad grammar on my part. As I read this transcript, I couldn’t help but smile and think of Dana Carvey’s impressions of the first George Bush we had as president. Anyway, back to the tire leasing program and Goodyear.

These early results France speaks of would be promised profit for Goodyear by NASCAR; which, in turn, leads to profit for NASCAR (i.e. – The France family) by Goodyear. Know that this much is clear; NASCAR’s partnership with Goodyear makes them lots of money, regardless of how crappy the tires can be. No wonder they’re smiling.

Here’s what Brian had to say about the recent points system change:

“I told many of you that we wanted to turn the corner, make winning even more important. That’s why our announcement last month, five points on the nose, the way we’re going to see the Chase when we get into the fall, is all going to be based on wins. Whether it’s symbolic or whether it’s tangible, that’s where we’re going. We want to constantly keep pushing that, but remaining and making sure that balance for consistency is preserved… but we’re headed towards more emphasis on winning.”

I’ve said it before and I’ll say it again, this man is a born politician. Winning more important, all based on wins, may be symbolic, may be tangible, (I don’t know), consistency is preserved, headed towards more emphasis on winning.

What Brian meant was that since so many people harped about it, out of the goodness of his royal heart he will throw out a little morsel to us ignorant peasants in the form of five more points for a win, and we should all shut up and praise him for it (five times a day and facing toward Daytona for the seriously devout).

Early on in the speech, France assumed a posture as if to plant a Royal Kiss on the posteriors of the attending media folks.

“…thank you very much. I know it’s the hardest-working press corps in press, the motorsports press corps. I know another thing, we keep you here a long time, 10 days in some cases. It’s a long spell. We appreciate the hard work and the good coverage that you guys provide.”

However, the members of the press barely had time to zip up and readjust before realizing that what was thought to be a kiss was actually a bite!

“I want to thank, again, the hard-working media corps that covers us week in and week out, but reminding you of a theme that I have that’s important. Despite the real hard effort and great effort in covering us, we’re still an under-covered sport in many major markets. We’re doing a lot of things to educate these various markets, various mediums to what NASCAR is all about and why this sport deserves a little bit better coverage. That’s on our watch, on my watch, so we’re going to be working at that pretty hard.”

What Brian is saying here is that it is the media’s fault that, just as an example, California Speedway, is not selling out because they (the press) don’t always toe the Royal Family line. The press had better step it up, he claims, or more spankings will result. For shame!

Later on in the speech, despite the fact that the press was still feeling the sting on their backsides, the suave oratory prowess of the Mighty One had them once again dropping their drawers in hopes of receiving another “kiss” to make the pain of the first one go away. In response to a query about some headlines focusing only on recently announced cheating; Brian France deftly reapplied his lip balm, leaned seductively forward, and said,

“That’s part of our problem. [But] not this group. This group is very sophisticated in what NASCAR and this industry is all about. But many parts of the country simply don’t know how to cover this sport, ”

I don’t know about you, but any man that can kiss like that, especially to the press and extra especially after biting the other but cheek previously, absolutely, positively deserves to be elected to some type of office!

As the headline read, this is only part one, as the actual transcript of France’s speech is six pages long. Perhaps next week, after the jealousy I feel from not actually being there to compare royal lip marks with my colleagues subsides, the second part of this article can be written. Until then, when in Daytona, make sure to carry your umbrella and,

The Frontstretch Staff is made up of a group of talented men and women spread out all over the United States and Canada. Residing in 15 states throughout the country, plus Ontario, and widely ranging in age, the staff showcases a wide variety of diverse opinions that will keep you coming back for more week in and week out.
@Frontstretch
Previous Matt McLaughlin’s 2007 Daytona 500 Driver Handicaps
Next Scanner Static: Is There a Crew Chief in the House?

Voices from the Cheap Seats: With Joy & Sadness, I Take My Leave of This Mess

Geez, where do I start? How do you sum up 10 years of weekly columns … 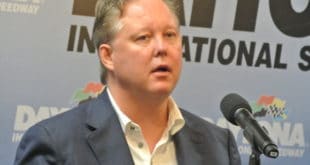 Voices from the Cheap Seats: Is Brian France Proud of What NASCAR Has Become?

In the 10 years that I have been doing this gig, there is one interview …