As we head into Bristol this weekend, we are often reminded of some of the most memorable moments in NASCAR Kulwicki was born on December 14, 1954 in Greenfield, Wis. He was a pioneer in the sport, coming to NASCAR through the Midwest's ASA series, which produced such luminaries as Rusty Wallace, Mark Martin, and Dick Trickle. Kulwicki was one of the first drivers to complete college, graduating from the University of Wisconsin-Milwaukee in 1977, with a degree in Mechanical Engineering. Alan used his education and experience to his advantage; always getting more out of less, and doing things smarter than the other guy. Legendary car owner Junior Johnson was once asked which driver he would have wanted to drive for him that never did. The two names that came to mind were seven-time champion Dale Earnhardt, and Kulwicki. Johnson was convinced that having a driver who was just as (if not more) mechanically adept as he or the people he had assembling the car would have made them a force to be reckoned with.

As we head into Bristol this weekend, we are often reminded of some of the most memorable moments in NASCAR history. Dale Earnhardt and Terry Labonte‘s last-lap antics in 1995 and 1999, Mark Martin winning two weeks after his father’s passing in a tragic plane crash in 1998 and Rusty Wallace winning his 50th race in 2000, just to name a few. One moment however is indelibly etched into the minds of many racing fans, especially those who were tuning in long before Jimmie Johnson knew what a Knaus was.

In April 1993, when NASCAR came to Thunder Valley, it was with a heavy heart. On a rainy Friday morning, the checkered flag dropped on the No. 7 Alan Kulwicki Racing transporter as it exited the speedway one last time. Hours earlier, Alan Kulwicki was killed in a plane crash along with representatives from his sponsor, Hooters. The driver who had jokingly removed the “TH” from his Ford Thunderbird air dam decal and applied a Mighty Mouse logo on his uniform would not be present to defend his title as 1992 Winston Cup champion, or as the defending champion of the Food City 500 at Bristol.

Kulwicki was born on December 14, 1954 in Greenfield, Wis. He was a pioneer in the sport, coming to NASCAR through the Midwest’s ASA series, which produced such luminaries as Wallace, Martin and Dick Trickle. Kulwicki was one of the first drivers to complete college, graduating from the University of Wisconsin-Milwaukee in 1977, with a degree in Mechanical Engineering. Alan used his education and experience to his advantage; always getting more out of less, and doing things smarter than the other guy. Legendary car owner Junior Johnson was once asked which driver he would have wanted to drive for him that never did. The two names that came to mind were seven-time champion Earnhardt and Kulwicki. Johnson was convinced that having a driver who was just as (if not more) mechanically adept as he or the people he had assembling the car would have made them a force to be reckoned with.

Alan was a master of doing more with less. During his first full year of competition in 1986, he was an oddity in the garage area. He not only carried a helmet bag, but a briefcase as well. Being an owner in addition to a driver meant having to wear many hats. That meant keeping a comb in the car too, always conscious of his appearance for current and potential sponsors. Steve Hmiel, now Technical Director of DEI, said he would always remember Alan for having “cool socks,” something he noticed prior to Kulwicki receiving his Winston Cup title at the Waldorf-Astoria Hotel in 1992. Alan was also a devout Catholic; putting a pair of St. Christopher wings under his driver’s seat for protection. Having an extra set of eyes looking out for you is never a bad thing, and the angels were able to fly low enough to help guide him to Rookie of the Year Honors, driving his No. 35 Quincy Steakhouse Fords. Alan was in the Ford camp long before Ford’s became chic in the late ’90s. Although he was competing with only a pair of Thunderbirds, a pair of engines and a pair of full-time crewmen, it was enough to get the job done.

As the 1988 season wound down, he scored his first victory in the Checker Auto Parts 500 in Phoenix, Ariz. The unconventional track was mastered by the unconventional driver, who after the race whipped his car around and proceeded to drive clockwise around the track, in salute to the fans. He deemed it his “Polish Victory Lap,” which was mimicked in tribute throughout the 1993 season by both Wallace and the late Earnhardt.

Alan’s No. 7 Zerex Fords were a mainstay on the NASCAR circuit through 1990. When Zerex didn’t return for the 1991 season, he began the year driving the original U.S. Army car, which was part of an effort by the U.S. military to support the troops who had begun Operation Desert Storm by sponsoring cars from each branch of service for the Daytona 500. His car would have blank quarterpanels for the next two weeks, but the following week at Atlanta, Hooters Restaurants came aboard as his primary sponsor. The new partnership got off to a strong start; Kulwicki put the Hooters Ford on the pole at Atlanta and led eight laps before posting an eighth-place finish. He would score a win at the night race in Bristol later in the year and post a 13th-place finish in points.

1992 would be his defining year. He scored his first win of the season again at Bristol, and later in the year won at Pocono. He was in contention for the title all year long, and things were looking up until he got to Dover in the fall. He would win the pole but crashed during the race, relegating him to a 34th-place finish. Alan was quite vocal afterwards that his 278-point deficit would probably be his undoing and keep him from challenging for the championship. In the next five races, he went got on a roll, posting two top fives with no finish worse than 12th. Heading into the final race at Atlanta, Alan was in contention to win the championship, along with five other drivers, in what would be one of the most memorable races in NASCAR history.

This race marked the end of a career for Richard Petty and the beginning of a new chapter in NASCAR with Jeff Gordon‘s debut. During the race, misfortune befell championship rivals Davey Allison, Kyle Petty, Martin and Harry Gant, leaving the battle down to Alan and Bill Elliott. In a series that now relies on a 10-race Chase for drama, the final handful of laps provided what was to be the closest finish in Winston Cup history. Elliot managed to win the race, his fifth of the year, but Kulwicki won the war. Using fuel strategy, courtesy of crew chief Paul Andrews, he stayed out and led one more lap than Elliott, claiming the five extra bonus points he needed to win the title by a mere 10 points, the closest margin in history until 2004. The champion emerged, comb in hand, and stood atop the No. 7 “Underbird” giving little more than a thumbs up and sigh of disbelief. The driver who a few years earlier survived a trailer fire as he was preparing to leave Cheeseland for Tobacco Road had just won the most prized championship in auto racing, and defeated two legends in Elliott and Junior Johnson in the process.

In a few short years, Kulwicki had done it all. From being an owner/driver/engineer/mechanic to being the first driver to win a championship from the North, as well as the last owner-driver to win a championship, Kulwicki did what no other drivers before or since have been able to do. It was fitting that the song played at the end of the 1992 Awards Banquet was Frank Sinatra’s “My Way.” Kulwicki had turned down offers from several high-profile owners in the sport in order to run his own operation the way he wanted to run it. The team was eventually sold to Geoff Bodine and was later owned by Jim Mattei. The team is long since defunct, but the No. 7 owner-driver spirit lives on today with privateer Ford driver Robby Gordon doing the impossible.

The 1993 Food City 500 at Bristol was fittingly won by longtime friend and competitor Wallace. Wallace, with No. 7 flag in hand, made the clockwise trip around Bristol Motor Speedway in salute to his fallen friend. Later that year at Pocono, the site of Alan’s final win, Earnhardt offered the same tribute, along with a finish line group prayer with the entire Goodwrench team. For the rest of the season following the April 1st plane crash that also claimed the life of the son of Hooters CEO Bob Brooks, every team carried the trademarked No. 7 decals on their car in tribute to the champion.

Alan was named to NASCAR’s Top 50 Drivers of All Time in 1998, and in 2002, Alan was inducted into the International Motosports Hall of Fame. In 2005, a low-budget motion picture titled, Dare To Dream: The Alan Kulwicki Story, produced for less than $100,000, was showcased in 14 states and 80 cities nationwide.

Alan Kulwicki’s name and likeness always conjures up a barrage of imagery. Alan pushing his car on the last lap after it ran out of fuel at Watkins Glen; taking a Polish Victory Lap after winning a race; the heartbreaking sight of his transporter exiting the racetrack one rainy spring morning; or his cool socks: Alan Kulwicki was one of a kind. And he did it HIS Way.

Vito is one of the longest-tenured writers at Frontstretch, joining the staff in 2007. With his column Voice of Vito (monthly, Fridays) he’s a contributor to several other outlets, including Athlon Sports and Popular Speed in addition to making radio appearances. He forever has a soft-spot in his heart for old Mopars and presumably oil-soaked cardboard in his garage.
Previous A Question of Risk: Is Death Too High a Price for a Driver to Pay?
Next NASCAR’s Busch Series: Fix the Points System, Please! 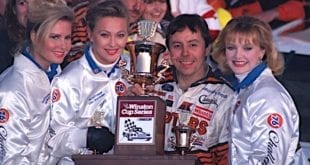 Alan Kulwicki: Running Down A Dream