While admirable performances were put in by a handful of teams, Sunday's final results leaned heavily in favor of the playoff participants - again. For the second straight week, eight of the top 10 finishers were also among the top 12 in Nextel Cup points, making it difficult to argue that any of the Chasers didn't deserve to be ranked amongst NASCAR's elite. But what about those drivers left behind? Now, just one race remains for any of them to salvage seasons that clearly didn't turn out the way they intended. Read on to find out Who's Hot and Who's Not, outside the Chase for the Championship.

Who’s Hot/Who’s Not: Outside the Chase After the 2007 Checker Auto Parts 500k at Phoenix

With just two races left on the Nextel Cup slate, the open roads of the great Southwest appeared the perfect place for a change of pace. After all, the subset of three dozen drivers outside the Chase had won just once during the playoffs, and you’d like to think the odds were in their favor heading to a 1-mile short track – especially while toting the unpredictable Car of Tomorrow in their wake.

However, that chance at redemption quickly became a desert mirage. While admirable performances were put in by a handful of teams, Sunday’s final results leaned heavily in favor of the playoff participants – again. For the second straight week, eight of the top-10 finishers were also among the top 12 in Nextel Cup points, making it difficult to argue that any of the Chasers didn’t deserve to be ranked amongst NASCAR’s elite.

But what about those drivers left behind? Now, just one race remains for any of them to salvage seasons that clearly didn’t turn out the way they intended. With time running out, who can defy the odds, putting together their best impression of a Happy Ending? And which teams have put themselves in a hole too deep to dig out of, not just for this year, but the beginning of the next? Read on to find out Who’s Hot and Who’s Not, outside the Chase for the Championship.

Hot/Not Update: How The Texas Edition Crowd Fared At Phoenix

The desert heat didn’t help many without a Chase sticker attached to their names; however, it did fuel the fire for Ryan Newman‘s recent hot streak in Arizona. The No. 12 Alltel Dodge led four laps at Phoenix en route to a fifth-place finish; in the process, he moved up to 13th in the standings, taking a 58-point lead over Dale Earnhardt Jr. in the battle for “Best of the Rest.”

Too bad Newman’s ride to the top didn’t come equipped with any passenger seats. Ricky Rudd and Elliott Sadler, both mentioned as “Warm” in last week’s edition, fell victim to some icy cold handling with their racecars. Rudd struggled to 35th – his worst performance since crashing out with a shoulder injury in September – while Sadler didn’t fare much better, coming home 27th in a less than rosy afternoon for Gillett Evernham Motorsports. None of GEM’s three entries finished within the top 25, with Kasey Kahne‘s car involved in two ugly wrecks.

Last week’s other featured driver, Mike Skinner (Cool), was not entered at Phoenix, concentrating instead on the Truck Series championship with his Bill Davis Racing Toyota.

While Newman’s Phoenix finish left him temporarily in control at 13th in points, he’s going to have a new challenger to the throne soon enough, and no, it’s not Earnhardt Jr. Greg Biffle sits just 65 points behind the Alltel Dodge after charging hard to a second-place finish in the closing laps of Sunday’s race.

“We just kept working on it,” said Biffle of a run that left him just short of ending Jimmie Johnson‘s four-race win streak. “I wish we would have had better track position where we could have got a crack at the No. 48, because we definitely had a faster car.”

That run leaves the Biff as one of the few men putting himself in position to be a Chase contender in ’08. Sure, the No. 16 has been inconsistent at times, but Biffle’s still the only man 13th or lower in points to win this fall; and looking ahead to Homestead, he’ll be the favorite to sneak away with win number two on the year. Having won the season finale a record three years in a row, there’s no reason in the world to suggest Biffle won’t be a strong contender for number four – putting his best foot forward in his quest to finish 13th in points.

JJ Yeley‘s never lived up to the expectations many had for his career at Joe Gibbs Racing; with divorce up ahead, the sophomore’s simply trying to keep his head held high before he leaves the first ride in Cup in the rear view mirror. For him, that’s the equivalent of five top-20 finishes in the last seven races, including a 14th at Phoenix to lead a rise to 20th in the current standings. With the opportunity to rise to as high as 17th after Homestead, the season for Yeley may not actually have been as bad as some made it out to be.

It once seemed a foregone conclusion Casey Mears was going to rise up into 13th in the final standings. But after a hot start to this year’s Chase, the driver of the No. 25 Chevrolet appears to have cooled off considerably. A 12th-place run at Phoenix was the fifth straight race he failed to finish in the top 10, accumulating a paltry average finish of 19th in the process. Now, he heads to Homestead, a track where he’s finished outside the top 25 in three of his four career starts; falling 103 behind the battle for 13th place, Mears unlikely to make up the ground he needs with that type of track record.

For Paul Menard, most of the summer and beginning of fall has served as the epitome of the word “cool:” sometimes good, never great, but always mediocre. After a ho-hum 22nd on Sunday, Menard continued an unbelievable streak in which he has finished between 21st and 30th in 11 of his last 12 starts. The lone exception? Talladega, where an untimely engine failure left Menard sitting less than pretty in 38th. If this kid were a veteran, I’d say this number tree wouldn’t leave him climbing towards great things; but as a rookie, it’s been key for the kid to gain valuable experience after struggling to simply qualify for several races the first half of the season.

For anyone thinking Jeremy Mayfield would provide the magical solution to Haas CNC Racing’s problems, well, think again. The two-time Chase participant has been less than spectacular in a three-race stint in the car; his finishes of 40th, 22nd and 39th have done nothing to build any sort of momentum heading into the ’08 season. What’s made it tough for this team is Friday qualifying; with an eye-popping average start of 39th place, Mayfield’s had to work from the back every weekend. That’s not the type of track record you want to sell potential sponsors, and this team is in need of one; with Best Buy announcing a move to Sadler’s team, primary sponsorship is up in the air for ’08.

For Joe Nemechek this month, the magic number – or lack thereof – has been three. Recently, the veteran inked a three-year deal with the team he’s currently with – Furniture Row Racing – ensuring he’ll be a part of the Nextel Cup circuit for years to come. But the curvy digit could also refer to the pile of DNFs Nemechek accumulated on the track as of late; crashing out at Phoenix, he was left sitting in the garage to ponder recent finishes of 35th, 36th and 38th. In fact, since joining this team, the DNF total for the 44-year-old stands at six in just 10 starts with the car; good thing he got that contract signed, sealed and delivered before anyone could change the terms!

The author of Bowles-Eye View (Mondays) and Did You Notice? (Wednesdays) Tom spends his time overseeing Frontstretch’s 30 staff members as its majority owner. Based in Philadelphia, Bowles is a two-time Emmy winner in NASCAR television and has worked in racing production with FOX, TNT, and ESPN while appearing on-air for SIRIUS XM Radio and FOX Sports 1's former show, the Crowd Goes Wild.
@NASCARBowles
Previous 1 Point To Ponder… Jimmie Johnson’s Dominance
Next Numbers Game: 2007 Checker Auto Parts 500K at Phoenix 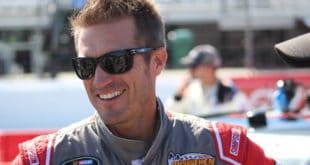 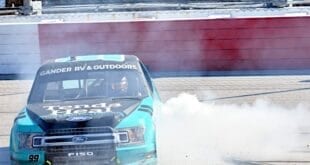