2
Consecutive Nextel Cup championships for Jimmie Johnson and the No. 48 Lowe’s team of Hendrick Motorsports.

2nd
Win of the 2007 season for Kenseth, and the first with crew chief Robbie Reiser this season – Kenseth’s earlier win at California came with Reiser suspended and not at the track.

7
Caution flags for a total of 32 laps Sunday.

10th
David Ragan‘s finishing position at Homestead, earning him Rookie of the Race honors for the 14th time this season.

14
Top-10 finishes this season for Ford 400 runner-up Kurt Busch, who moved up three places to finish seventh in the standings.

16
Number of times Juan Pablo Montoya earned Rookie of the Race honors en route to winning the title of 2007 Raybestos Rookie of the Year.

21st
Ricky Rudd‘s finishing position on Sunday in the Ford 400. Rudd made the 906th and final start of his 32-year Cup career; Ricky, you will be missed!

25
Lead changes among 11 drivers at Homestead.

25
Penalties handed down by NASCAR during the running of the Ford 400.

30
Top-10 finishes for Jeff Gordon after a fourth-place run at Homestead, setting a modern-era record for most top 10s in a single season.

40
Cars running at the end of the race at Homestead; 16 of those were on the lead lap.

43rd
Benson’s finishing position on Sunday. He was only able to complete 73 laps before retiring from the event with a blown engine.

57
Career Cup wins for the now retired Robert Yates. After 19 years as a successful team owner, the Ford 400 at Homestead was Yates’ final race. We’ll miss you, Robert!

77
Points that Johnson beat Gordon by to win the Nextel Cup championship.

214
Laps led by Ford 400 winner Kenseth on Sunday, the most of any driver.

80,000
Estimated crowd in attendance at Homestead on Sunday.

The Frontstretch Staff is made up of a group of talented men and women spread out all over the United States and Canada. Residing in 15 states throughout the country, plus Ontario, and widely ranging in age, the staff showcases a wide variety of diverse opinions that will keep you coming back for more week in and week out.
@Frontstretch
Previous Matt McLaughlin’s Thinkin’ Out Loud: 2007 Homestead Race Recap
Next Busch Series Breakdown: 2007 Ford 300 at Homestead 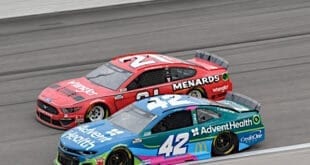