Did You Notice? That in the closing laps of the race in Mexico City, with Scott Pruett’s bumper hanging by a thread, NASCAR refused to throw the black flag on the No. 40? Is it just me, or wasn’t that pretty dangerous? Sure, it’s not Pruett’s fault the bumper got loose; it was because someone else laid the chrome horn. But in virtually any other situation – say, at Bristol – that car would have been on pit road within five laps. As far as I’m concerned, that thing could have fallen off, someone else could have run it over, and that person’s day would have been ruined through no fault of their own. It sucked for Pruett, but he should have been forced to pit.

Did You Notice? Pruett’s Bumper, A Tale of 2 Juan Pablos & The Cup/Nationwide Connection

Tom Bowles April 23, 2008 Cup Series, Did You Notice?, Tom Bowles, Xfinity Comments Off on Did You Notice? Pruett’s Bumper, A Tale of 2 Juan Pablos & The Cup/Nationwide Connection

Did You Notice? That in the closing laps of the race in Mexico City, with Scott Pruett’s bumper hanging by a thread, NASCAR refused to throw the black flag on the No. 40? Is it just me, or wasn’t that pretty dangerous? Sure, it’s not Pruett’s fault the bumper got loose; it was because someone else laid the chrome horn. But in virtually any other situation – say, at Bristol – that car would have been on pit road within five laps. As far as I’m concerned, that thing could have fallen off, someone else could have run it over, and that person’s day would have been ruined through no fault of their own. It sucked for Pruett, but he should have been forced to pit; once he wasn’t, that’s a dangerous inconsistency precedent for NASCAR to set. What if someone partially tears a bumper at Talladega this weekend? What will they do then?

Did You Notice? That perhaps one of the reasons NASCAR likes Mexico City so much is they can walk around the streets virtually unnoticed. A highlight of the trip was seeing Mike Helton, Robin Pemberton and other officials and their wives eat at the Hard Rock Café Saturday night in the city. They didn’t need a private table, they didn’t need a private room; in fact, they were seated right in the center of the restaurant without a problem, because anyone in the vicinity had absolutely no clue who those people were (or were NASCAR media, garage members or officials themselves). I’ve never seen drivers walking by themselves down the street as much as they did, free and clear of anyone running up to them for an autograph.

I guess my only question is, if we’re looking for a “vacation” spot like this where these people aren’t hounded, couldn’t we do it in Canada or another part of Mexico? To say that Mexico City was a bit of an experience was putting it mildly; I’m still trying to get the smell of the city out of my nose three days later. I’m sorry, but it’s true; when people say the area is racked by pollution, they’re not kidding.

PUGLIESE: MEXICO CITY THE ANSWER TO A QUESTION NO ONE ASKED

Did You Notice? That one of the underreported stories of the weekend was Adrian Fernandez’s insistence that NASCAR is going to need a Mexican driver in order for the series to truly branch out and be successful elsewhere. The IRL race over at Kansas Speedway this weekend features a list of 18 drivers from other countries and hometowns, including six from Venezuela and Brazil; NASCAR’s entry list for Talladega has three and one, respectively. With the Latino market one of the fastest-growing segments of the American population, you’d think it would be more accurately represented; of course, that’s one of the continuing challenges of the Drive For Diversity program, which has so far failed to make the connection from prospect to superstar.

Did You Notice? Two struggling teams looking in two different directions. In need of qualifying on speed at Talladega, Haas CNC Racing goes ahead and signs Ken Schrader to a one-race deal, relying on his 45 starts, two pole positions, and 12 career top-10 finishes at Talladega. In the meantime, the Wood Brothers keep it within the family and tab son Jon Wood to return to the Cup Series, after he’s got a total of one career start to his name. Not at the track… in total.

Are you serious? A rookie… at a restrictor-plate track… when he hasn’t even been tearing up the Truck Series this year (a high finish of 10th in four starts)? I don’t understand the methodology behind what the No. 21 team is doing, I really don’t.

Did You Notice? That three of Travis Kvapil’s four sponsors this year have come from the Truck Series (K&N Filters, Zaxby’s, and Northern Tool & Equipment). Just shows that it pays to make yourself a household name somewhere else before you go ahead and move back up the ranks…

Did You Notice? That Juan Pablo Montoya has scored the exact same amount of points this year through eight races as he did last year (854). But media spin will tell you it’s a tale of two different seasons. Last year, the running theme was that Montoya was a rookie who had overachieved; this year, it’s that he’s struggled amidst a fleet of underperforming Chip Ganassi Racing cars. Man, do expectations rise quickly in the sport these days… have I mentioned that sometimes us journalists get a little carried away with ourselves?

Did You Notice? Jimmie Johnson is the only driver in the top 10 in the Sprint Cup standings who hasn’t run a single Nationwide Series event this year. The other nine drivers have all run at least four of nine, collecting a total of six wins and two dozen top-five finishes between them. Now, the bigger question is whether their knowledge from running those races still translates into their Cup Series rides; or, whether it’s a case of the greatest drivers beating up on those in a lower division.

Honestly, it’s probably a little bit of both. These drivers are at the top of their game in the number one stock car series in America, so it’s no surprise for them to come down into a lower series and wreak havoc competing against a majority of younger, up-and-coming drivers who don’t have the experience to compete. But there’s also a reason drivers like Ryan Newman are complaining about not having Nationwide Series rides; the more experience you gain on a track in any given weekend, the better knowledge base you’ll have about how to drive the track when you get to the main event on Sunday – no matter what kind of car you drive. Sure, the Car of Tomorrow is completely different from its Nationwide Series counterpart; but it’s not a Craftsman Truck. A source once told me that the CoT is “the old car with a poor front end and no rear spoiler” – making it close enough to the Nationwide Series vehicle that some notes can still be applied.

Did You Notice? Talladega is always the biggest crapshoot of the year? That’s why it’s always fun from the standpoint of trying to pick a winner. For maybe the only time in a whole season, fans of drivers like Scott Riggs, David Gilliland or even a Joe Nemechek can honestly believe that under the right circumstances, their driver can win the race with an underfunded effort. Remember when Dave Marcis led one of these things at 60 not too long ago? While there’s many dangers to racing at this speedway, the hope the track gives longshots is truly a thing of beauty.

The author of Bowles-Eye View (Mondays) and Did You Notice? (Wednesdays) Tom spends his time overseeing Frontstretch’s 30 staff members as its majority owner. Based in Philadelphia, Bowles is a two-time Emmy winner in NASCAR television and has worked in racing production with FOX, TNT, and ESPN while appearing on-air for SIRIUS XM Radio and FOX Sports 1's former show, the Crowd Goes Wild.
@NASCARBowles
Previous Thompson in Turn 5: A Successful Female NASCAR Driver Would Be… Oprah-Like
Next Mirror Driving: Mexico’s Blown Save, Jon Wood… Savior? & Saving Excitement at Talladega 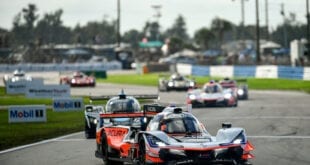