Did You Notice? That at Talladega, the No. 21 Ford driven by Jon Wood had to pull in the garage after just one lap in order to fix radical adjustments made in qualifying to get the car in the show. Now, I know it looks like I pick on the Wood Brothers every week, but it’s hard to ignore them when they continue to make major mistakes. There were seven other cars who qualified on time for this race, and none of them had to spend nine laps in the garage area to fix their cars within the first five laps.

Did You Notice? Ganassi’s Trial By Fire(d), The Trials & Tribulations of the Woods &… Morgan Shepherd?

Tom Bowles April 29, 2008 Cup Series, Did You Notice?, Tom Bowles, Xfinity Comments Off on Did You Notice? Ganassi’s Trial By Fire(d), The Trials & Tribulations of the Woods &… Morgan Shepherd?

Did You Notice? That at Talladega, the No. 21 Ford driven by Jon Wood had to pull in the garage after just one lap in order to fix radical adjustments made in qualifying to get the car in the show. Now, I know it looks like I pick on the Wood Brothers every week, but it’s hard to ignore them when they continue to make major mistakes. There were seven other cars who qualified on time for this race, and none of them had to spend nine laps in the garage area to fix their cars within the first five laps.

What the heck did the team do to the car to make it that urgent for them to go behind the wall? Couldn’t Wood have just lost the draft, driven really conservatively, and hoped a caution came out to fix the issues? Killing your chances for a good finish before you’re even 10 miles in probably isn’t good for team morale; how can you gain points on the Top 35 when you’re putting yourself in a position where you’re simply trying to leapfrog cars that wreck? But to me, the best part of the whole thing was the post-race press release, in which crew chief Mike Smith attempted to be optimistic.

“Jon stayed back far enough, when the big wrecks happened, he was far enough back where he could slow down with nobody behind him who could crash into him,” explained Smith. “It played out nice. I know it wasn’t the finish that everybody wanted, and it wasn’t the finish I wanted – it’s in the right direction and we gained points, and we were at Talladega. So, it was a good thing.”

Who knew one of the most feared teams in motorsports a generation ago would one day simply be happy to be at the racetrack. And it’s one thing to stay at the back of the draft and miss the wreck when you’re on the lead lap; it’s another thing altogether when you’re nine laps behind.

OK, I’ll stop picking on them now. I want this team to succeed; but seriously, they’re driving me crazy.

Did You Notice? That a subtle way in which Brian Vickers and AJ Allmendinger chased the pole at Talladega could change how the entire field qualifies at restrictor-plate tracks in the future. Typically, the two-lap sessions are monotonous as can be, as most cars follow what’s called a “corkscrew” theory. Spending the first lap utilizing the high groove at the top of the track, drivers then use their second lap to hug the inside line in order to get the most speed possible out of their restricted engines. The whole thought process behind that has been that the cars spend their first qualifying lap getting up to speed due to restrictor plates; and because of that, it’s supposedly a necessity to build momentum during that “throwaway” lap in order to pick up as much as a full second during lap 2.

However, Vickers and Allmendinger had a different strategy. Hugging the inside line during both their qualifying laps, their times weren’t much different from lap 1 to lap 2; but both of them put forth strong performances that put them solidly within the top 10. Dario Franchitti followed their lead, and actually posted a slower qualifying time on lap 2 because of it; but it didn’t matter, as the non-Top 35 car slipped into the field in the 43rd and final slot.

Will all these changes make Talladega qualifying more bearable to watch? Probably not; but it was interesting to find out that after 20 years, the whole theory behind “building speed” for a pole run on the second lap is now a bunch of hogwash with the CoT. The engines may still be restricted… but they don’t take two and a half laps to get up to full song. Maybe about half that…

Did You Notice? Speaking of teams outside the Top 35, if the No. 40 team hires Sterling Marlin to drive its Dodge at Darlington in place of Franchitti, that means Ganassi will have employed the last two drivers he fired in the matter of three weeks. Marlin drove the No. 40 car from 1998–2005, compiling four wins and 26 top-five finishes before he was unceremoniously dumped in favor of “younger talent.” That was David Stremme, who lasted two seasons in the car with just three top-10 finishes before Ganassi lost his patience to the wandering eye of open-wheel talent. After just two years to prove himself – and with improving results – Stremme was pulled in favor of the IRL’s Franchitti.

Of course, Franchitti has struggled since coming on board, leaving the No. 40 struggling for sponsorship and overall direction. But Stremme filled in admirably at Talladega, putting the team in contention for a win before a last-lap crash relegated him to 28th. And Marlin’s Darlington record isn’t too shabby, either; he won the spring race in the No. 40 Dodge back in 2002.

All this has me scratching his head as to why Ganassi wants to reach back to grab those he thought were no longer good enough. There’s so many other substitutes out there; why open yourself up to criticism by employing drivers you didn’t think were worthy enough for you such a short time ago?

Did You Notice? That Morgan Shepherd’s 13th-place finish at Talladega with his underfunded Racing With Jesus program should be commended; that is, until you consider it’s the first time he’s actually chosen to finish a race since July 3, 2004. Since then, the No. 89 had racked up 49 straight DNFs in both the Nationwide and Cup Series, making a total of $1.6 million for bringing a car to the track that many times had no intentions of completing more than a few laps of the race. In the process, through qualifying he’s knocked out dozens of teams that have every intention of going the distance.

Am I awed by the fact that Shepherd can still get the job done at 66 years old? Absolutely. But am I going to stand up and applaud someone for choosing to finish a race, something most competitors have as their primary goal every week? Absolutely not.

Did You Notice? That even the two unsponsored Yates Racing cars are running better than Jamie McMurray at Roush Fenway right now? That’s gotta hurt.

Did You Notice? Tony Stewart’s attempts to throw reporters off the trail by claiming he had offers from “several manufacturers,” including Ford and Dodge?

Ford? Come on, Tony… last I checked, they renamed Ford Roush Fenway Racing… and that team is downsizing, not looking for replacements. And can anyone really see Stewart driving for a Dodge program that’s been floundering for the better part of two years?

No, what Tony’s doing is smart; he’s trying to bait reporters into following false trails that don’t lead to the right answers. But this one’s going to continue to stick by his story… I’ll be waiting for the Haas CNC announcement with bated breath.

The author of Bowles-Eye View (Mondays) and Did You Notice? (Wednesdays) Tom spends his time overseeing Frontstretch’s 30 staff members as its majority owner. Based in Philadelphia, Bowles is a two-time Emmy winner in NASCAR television and has worked in racing production with FOX, TNT, and ESPN while appearing on-air for SIRIUS XM Radio and FOX Sports 1's former show, the Crowd Goes Wild.
@NASCARBowles
Previous Top 10 Reasons Kevin Lepage Won’t Have a Full-Time Ride in the Cup Series Anytime Soon
Next Thompson in Turn 5: Richmond International Raceway the Best of the Rest! 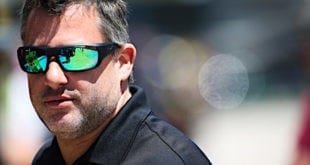