As the Craftsman Truck Series rolls into Martinsville Speedway for the final short-track race of the season, there are some new faces on the entry list. Mike Skinner's son Dustin Skinner is just one of those drivers; he'll follow in the footsteps of his father and his older brother, Jamie Skinner, who also made their debuts at the Virginia short track.

Tearing Apart the Trucks: New Faces in the Field at Martinsville

As the Craftsman Truck Series rolls into Martinsville Speedway for the final short-track race of the season, there are some new faces on the entry list. Mike Skinner‘s son Dustin Skinner is just one of those drivers; he’ll follow in the footsteps of his father and his older brother, Jamie Skinner, who also made their debuts at the Virginia short track.

The 23-year-old started racing go-karts in 1998 and moved onto four-wheel racing by 2000, where he won six of the eight races he ran. In 2006, Dustin ran six races in the Florida Association of Stock Car Auto Racing (FASCAR) Pro-Truck Series and won five of those races; he never started outside the top 10 in those races.

In October, 2007, Dustin tested with his father, Mike, and Bill Davis Racing at New Smyrna (Fla.) Speedway. When the test was over, his father Mike had plenty of good things to say about his son’s abilities on the track.

“Dustin did incredibly well. I was pleasantly surprised with how well he ran. Heck, he ran just as fast as I did, and I don’t know any rookies that have ever done that,” Skinner said. “Jeff (Hensley, crew chief) threw a lot of things at him over the two days, and he adapted to everything. He gave incredible feedback. It was amazing. He reminds me of a younger Kyle Busch behind the wheel: very trainable.”

Now of course, it’s a father’s job to be proud of his son, but Mike wasn’t the only person to have good things to say about Dustin’s performance when the team was done testing. Crew chief Jeff Hensley said, “He did great. I made several adjustments to the truck Dustin was in during the test session, and he adapted to everything rather well. There’s no doubt about it he can go fast.”

Dustin will pilot the No. 03 Germain Racing Toyota Saturday afternoon; the truck will have a pink ribbon on the hood in honor of Breast Cancer Awareness Month.

Another young driver making his debut for Germain Racing will be Sean Caisse in the No. 9 Toyota Tundra. In 2005, the 22-year old was crowned the NASCAR Grand National Busch East Series Rookie of the Year. Caisse had sevens wins in the series between 2006 and 2007 and finished second in the points standings in 2007.

Penske Racing’s Sam Hornish Jr. will also be making his CTS debut Saturday afternoon. In an effort to gain some experience for Sunday’s Sprint Cup Series race, Hornish will pilot the No. 4 Penske Truck Rental Dodge for Bobby Hamilton Racing-VA.

Joining Hornish and the others as new faces this weekend, Russ Dugger will make his Truck Series debut behind the wheel of the No. 89 Lafferty Motorsports Duct Seal Technologies/”Damn Good Jerky” Chevrolet. Most of Dugger’s racing experience can be attributed to the United States Super Truck South racing series.

Yet another new driver attempting to make his debut this weekend is Robert Bruce, who will pilot the No. 73 Taylor Race Products/Mid Atlantic Wrecker Service Dodge. Bruce will be forced to make the field on time.

TRG Motorsports will also bring another driver making his Craftsman Truck Series debut. Ben Stancill will pilot the No. 71 Zero Seconds Campaign Chevrolet. The Zero Seconds Campaign is designed to raise awareness of the dangers of leaving children unattended in and around motor vehicles. Stancill will also have a tribute to his friend, Grace, who is living with Guillain-Barré Syndrome, a disorder in which the body’s immune system attacks part of the peripheral nervous system.

Aside from those drivers making their CTS debut, there’ll be a few more faces that haven’t visited the series yet this season. Jamie McMurray will be making his return to the series in the No. 09 Zaxby’s Ford for Roush Racing. The last time McMurray raced in the Truck Series was in this race in 2004.

Though most of the drivers returning to the series are guaranteed a starting spot based on owner points, Hermie Sadler will be forced to qualify on time if he wants to make his return to the series. Sadler’s last start in the series came in this race last year behind the wheel of the No. 71 for Andy Hillenburg. This time, Sadler will pilot the No. 48 Chevrolet for Fast Track Racing.

Even with all of the debuts and drivers returning to the series, two other drivers find themselves returning to trucks they’ve driven in the past. Terry Cook will pilot the No. 59 for HT Motorsports for the remainder of the season after being released from Wyler Racing following Talladega two weeks ago. Cook returns to HTM less than a year after he was released to make way for Whelen Modified driver Donny Lia, who made just one start in the No. 59 before leaving for TRG Motorsports.

In Cook’s place, Jack Sprague rejoins Wyler Racing. Sprague will pilot the No. 60 Wyler.com Toyota after being released from Kevin Harvick Inc. Sprague was released following a DNF at Talladega two weeks ago. Sprague drove the No. 60 last season prior to joining KHI; he scored one win and finished 19th in the points standings.

With a lot of new and returning faces in the field this weekend, the Kroger 200 is sure to be an interesting race.

“I think it takes two things to have success at Martinsville; the first being track position and second taking care of your equipment. It is easy to get aggressive during practice and use up your brakes and tires. Track position is so important. I think the crew chief is more important than the driver now. He has to make the call when to come down pit road and when to stay out.” – Dennis Setzer, driver of the No. 18 Dodge

“Racing at Martinsville is pretty basic: Get your track position and protect it but at the same time, keep the nose on the truck. Pit strategy has become extremely important with the increased durability of the Goodyear Wrangler tire. That doesn’t mean everything’s out of the driver’s hands – especially on pit road. The best strategy can be foiled by a speeding ticket or bad luck. The pits are tight and the potential for being boxed in or a collision is always there.” – Craftsman Truck Series Director Wayne Auton

“It’s a tough little racetrack. The aerial view of it looks like a paperclip and it’s like driving on one, really. It’s awesome. I think the truck race is just long enough and there’s enough beating and banging to make the fans say that they got their money’s worth. I’ve gone there talking myself into having the patience of Job. It just doesn’t work.” – Jon Wood, driver of the No. 21 Aqua Sun Motorsports Ford

Content Director Beth heads up management of our 30-person staff, acting as Tom’s main assistant with technology and personnel while working as Frontstretch’s Truck Series expert. The author of Truckin’ Thursdays and the coordinator of the site’s pre and post-race coverage, she also runs a periodic charity column that spotlights when NASCAR gives back. A childhood transplant to Texas, Beth is a 15-year writing veteran who has contributed content to BRANDT and Athlon Sports, among other outlets.
@NASCARBeth
Previous Beyond the Cockpit: Matt Kenseth on a Lost Chase, Free Agency & the CoT
Next Kenny Wallace Driver Diary: Rumors, Superspeedways & Looking Ahead 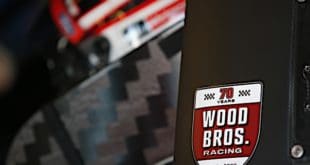