Full Throttle: Giving Thanks Where Thanks Is Due

I am thankful for:

Bill France Sr. – He came up with this whole NASCAR idea and without him, who knows what form stock car racing would have in America today.

Bill France Jr. – He ushered the sport to the next level, which enabled all of us to see every race on TV.

Brian France – Because whether you love him or hate him, he is trying his best to make the sport better.

John Darby – He has a thankless job with countless demands on his time, but every time I have ever seen him at the track and wanted to ask him a question, he’s taken the time to answer it for me.

Richard Petty – He laid the foundation for how drivers should deal with fans, and is still around as a reminder when the modern drivers start to lose focus on that.

Dale Earnhardt – He picked up where Petty left off and escorted the sport to its precipice of the corporate boom.

Jeff Gordon – Even if you hate the vanilla, corporate shill that many modern drivers appear to be, Gordon brought the sport to the masses and made it much more mainstream than it had been before him.

Bruton Smith – If for nothing more than being someone to keep ISC in check. But also for realizing that the show is all about the fans and giving us the amenities that make the weekends at the track so much better.

Humpy Wheeler – For blowing up more stuff than any other promoter…ever.

Tony George – For bringing NASCAR to the Indianapolis Motor Speedway.

Bob Jenkins – For being the voice of racing on ESPN for all of those years before it hit the big time.

Short-track promoters – The men and women who bring racing to all of us at all of the little tracks throughout the country and try their best to put on a great show every night.

Sponsors – Big and small, from every level of corporate America, who make it possible for the teams to run in the Cup races on Sundays and the dirt late model races on Friday night.

Simpson, Impact, Bell, Puma, Adidas and all of the other companies who make safety equipment – For keeping our heroes and our family members safe and sound when they wreck.

SAFER barriers and the CoT – Because Michael McDowell walked away from that crazy wreck, as did every other Cup driver who wrecked this year.

The people who work at the tracks, from security people to the media staff, to the TV production folks, and everyone in between – People who do their best to make the race experience on TV and in person as enjoyable and easy as possible.

Frontstretch – For letting me type out my musings on a weekly basis and letting me read the stories of so many other writers.

The Frontstretch editors – Who continue to make me sound far better than I ever do when I first submit my articles.

Our readers – The most important people on this list. Without you the site would not exist, the sport would not thrive, and we would not continually learn more and more about what entertains the fans of this sport on a daily basis.

Thank you all for taking the time to read this site and for being fans of the best sport on the planet. It truly is a day for giving thanks.

What is it that Mike Neff doesn’t do? The writer, radio contributor and racetrack announcer coordinates the site’s local short track coverage, hitting up Saturday Night Specials across the country while tracking the sport’s future racing stars. The writer for our signature Cup post-race column, Thinkin’ Out Loud (Mondays) also sits down with Cup crew chiefs to talk shop every Friday with Tech Talk. Mike announces several shows each year for the Good Guys Rod and Custom Association. He also pops up everywhere from PRN Pit Reporters and the Press Box with Alan Smothers to SIRIUS XM Radio. He has announced at tracks all over the Southeast, starting at Millbridge Speedway. He's also announced at East Lincoln Speedway, Concord Speedway, Tri-County Speedway, Caraway Speedway, and Charlotte Motor Speedway.
@MNeffShortTrack
Previous Matt McLaughlin Mouths Off: Testing 1, 2, 3
Next Thank You Frontstretch Fans!

Subscribe: iTunes In this week’s edition of the Frontstretch Podcast, Dustin Albino and Mike Neff discuss the opening round of … 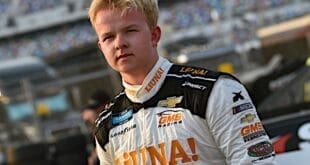 Subscribe: iTunes In this week’s edition of the Frontstretch Podcast, Dustin Albino and Mike Neff discuss all the long green …