In racing, there's that old analogy of "second place is the first loser." And in certain ways Sunday, Jeff Gordon did come up short. As Matt Kenseth celebrated in Victory Lane late into the night at Fontana, Gordon saw his winless streak extended to 42 points-paying events -- tying the worst stretch of his 16-year career. But for Gordon, losing out on the California Oscar couldn't completely erase the momentum of finishing runner-up. Two races in, a second-place finish -- combined with a strong Daytona performance derailed only by the weather -- has momentum back in the corner of team No. 24. And when you're dealing with a man who's won more Cup races in the past 20 years than anyone else, that's not something to be taken lightly by the rest of the competition.

In racing, there’s that old analogy of “second place is the first loser.” And in certain ways Sunday, Jeff Gordon did come up short. As Matt Kenseth celebrated in Victory Lane late into the night at Fontana, Gordon saw his winless streak extended to 42 points-paying events — tying the worst stretch of his 16-year career.

But for Gordon, losing out on the California Oscar couldn’t completely erase the momentum of finishing runner-up. Two races in, a second-place finish — combined with a strong Daytona performance derailed only by the weather — has momentum back in the corner of team No. 24. And when you’re dealing with a man who’s won more Cup races in the past 20 years than anyone else, that’s not something to be taken lightly by the rest of the competition.

“I’m so excited about this race team right now,” a fired up Gordon said after leading 64 laps Sunday — his highest total since Martinsville last spring. “I love the way the car was driving. To be able to battle and go to the front like that, have solid pit stops… felt like we had the car [to win].”

To do so, he had to fight the momentum of the No. 17, whose net gain of 10 spots on pit road consistently stymied the competition. Their final stop left Gordon in the role of the challenger, giving Kenseth the lead for the race’s final restart on lap 216. But while this year’s Daytona 500 winner darted out to a quick, seemingly insurmountable lead, it was Gordon who refused to give up, cutting the deficit to a handful of car lengths in fighting to the final corner of the final lap.

“I put a lot of heat on him,” said Gordon in an obvious admission even the casual racing observer could see from a distance. “I drove as hard as I’ve driven in a long time. He didn’t make any mistakes. Maybe one little slip up, but just wasn’t enough for me to do anything with him.”

One person Gordon and Company were able to handle quite easily for a change was the No. 48 team of Jimmie Johnson. The man who’s stolen Gordon’s thunder as top dawg at Hendrick Motorsports showed no signs of slowing early on, leading 74 of the first 77 laps and threatening to turn the race into a runaway. But as track conditions shifted with the darkness, the setting sun brought a surprising fade to Johnson’s No. 48. For the first time in recent memory, it was Steve Letarte outadjusting Chad Knaus atop the pit box, as the track fell right into the hands of the DuPont Chevrolet. By race’s end, Johnson was struggling to simply hold onto a top-five finish, while Gordon was the sole Hendrick contender left standing.

The final results didn’t show Gordon and Johnson separated by all that much: second and ninth is just a 32-point difference, after all. But it’s the mental confidence boost that gives Gordon’s corner in 2009 that makes this comparison worth mentioning. After two years of getting beaten down repeatedly by the former mentee, the mentor and his oft-criticized crew chief are looking for any sort of ammo he can get.

“It’s called getting beat and not liking it,” said Gordon of his and the team’s sudden focus in 2009. ” I’ve worked harder over this offseason getting myself in shape than I have in a long time. I’m refocused.”

“I’m a little bit more used to being a dad now.”

It’s that word “dad” which many thought would bring a quick end to Gordon’s career; and in time, perhaps it will. After all, talk went wild in Daytona of the man’s impending retirement once Gordon mentioned how he’d like to have a role at Hendrick Motorsports once his driving career is over (for the record, his contract in that department runs only through 2010). With Johnson going for four straight titles, Mark Martin going for his first at 50, and Dale Earnhardt Jr.‘s quest for legitimacy in the No. 88, it’s easy to lose the most accomplished man in the bunch to “also ran” status a bit too soon.

At 37, it’s true that youth of the man they once called Wonderboy has been replaced by experience — and the rigors of modern-day NASCAR point to a career ending sooner rather than later. But one thing about the best athletes we often forget is how many are capable of one final flash of greatness before it all fades to black. For all the talk of Brett Favre’s final year in the NFL, people forget his second-to-last season, when he fell one pass short of leading his Green Bay Packers to the Super Bowl. There was the late, great Dale Earnhardt, who recovered from a four-year slump to finish runner-up in the 2000 standings at age 49. For every Darrell Waltrip, there’s a Rusty Wallace who fills the backside of his career with results to be proud of, not scorned upon.

Whether this will be the season of Gordon’s renaissance is yet to be determined. But just two years removed from what could have been his sixth championship under the old points system, we at least know this much… Jeff Gordon is determined not to be fourth on the Hendrick totem pole. And — at least for the moment — that’s been enough for him to end the month of February back on top of it.

The author of Bowles-Eye View (Mondays) and Did You Notice? (Wednesdays) Tom spends his time overseeing Frontstretch’s 30 staff members as its majority owner. Based in Philadelphia, Bowles is a two-time Emmy winner in NASCAR television and has worked in racing production with FOX, TNT, and ESPN while appearing on-air for SIRIUS XM Radio and FOX Sports 1's former show, the Crowd Goes Wild.
@NASCARBowles
Previous Great Work in the Pits Guides Matt Kenseth to His 2nd Straight Victory in 2009 Auto Club 500
Next Bubble Breakdown: Team Penske Rebounds from Poor Daytona 500 Performances 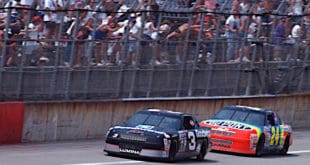 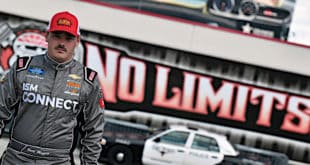 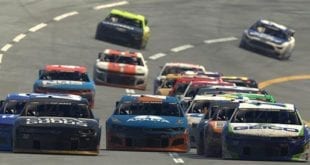