He might be recognized by some fans as the actor who played Dale Earnhardt Jr. in the movie 3, but Chad McCumbee is a racer through and through. He currently sits in fifth place in the NASCAR Camping World Truck Series driver standings, and his team is on a roll. He took some time out of his CWTS schedule to sit down with Frontstretch’s Amy Henderson to discuss everything from his start in racing to helping his team survive the economy.

Beyond the Cockpit: Chad McCumbee On Going From Movies to Truck Racing

He might be recognized by some fans as the actor who played Dale Earnhardt Jr. in the movie 3, but Chad McCumbee is a racer through and through. He currently sits in fifth place in the NASCAR Camping World Truck Series driver standings, and his team is on a roll. He took some time out of his CWTS schedule to sit down with Frontstretch’s Amy Henderson to discuss everything from his start in racing to helping his team survive the economy.

Amy Henderson, Frontstretch: You’re with a comparatively small team in the Camping World Truck Series, and you’re fifth in points so far. What are the keys to your success?

Chad McCumbee: When I thought we were running a full Cup schedule, I had talked to Bobby Dotter about maybe driving for him on a limited basis, and he told me that he and Tim Smith were really committed to improving the program over at SS Greenlight Racing. They were making a bunch of steps to really try to improve and get up into the top five. So I was seriously considering doing that and trying to work through what some of my responsibilities could be and then when everything went down and we found out that Petty Enterprises was to be no more, obviously I’d been in contact with Bobby. We were able to put it together and it’s my primary focus. These guys did a really good job of making improvements over the offseason and we came out of the box with some momentum. We didn’t have the greatest Daytona, but Bobby made some great calls from on top of the pit box and we were able to get the truck running really good. It really hasn’t changed a tremendous amount from what we had last year, but we’ve just gone about things a little differently and found some success. Now we have to keep it going.

Henderson: It seems like this season that your team has excelled at the 1.5-mile tracks, which have hurt many small teams in the past. What’s your secret?

McCumbee: The mile-and-a-half tracks have always been my strong point. Why, I don’t know, but it seems like my driving style really fits those kind of racetracks. I’ve learned a whole lot and really gotten a feel for exactly how I want the truck to react. We just work toward getting it comfortable for me, and we put our heads together and we’ve really been able to come up with some solid pieces. I don’t know if it’s been good luck or anything. We’ve been able to make some really efficient decisions. We’ve been having a lot of people help us out and it just all came together really good. We’ve been able to develop a package quicker than what it’s taken before. Sometimes you hit it right from the start and that’s definitely what we’ve been able to do.

Henderson: Considering your early success, what are your goals for the rest of the year?

McCumbee: When we first signed up, I was going to run a partial schedule, and really try to focus on running good at the races we went to. Obviously, we’ve had some success already. We’re sitting fifth in points. Right now our number one goal is to try and find sponsorship so we can keep going. Races like Martinsville and Dover weren’t on the original schedule, so we’re really trying to figure out how we can get to those races and be competitive there to try to hold on to that top-five spot. So that’s the number one goal. If we can do that, I really believe that we can a strong contender in the top 10 and top five all year and hopefully get that No. 07 Chevy in Victory Lane.

Henderson: One topic that’s come up again and again this year in all the series is sponsorship and the economy. What do teams have to do in a tough economy to survive?

McCumbee: It is tough. We’ve mainly just tried to cut costs when we can. I think that’s what most companies are having to do right now, and you have to do the same thing in the racing world. We’ve tried to look at areas where we can cut costs. At the same time, our primary focus is on improving the team, so we haven’t made a tremendous amount of cuts. We’ve been lucky and blessed that we haven’t torn up a lot of stuff, and that’s been saving us a little money. We’ve had to cut a few corners that we know won’t hurt us form a performance standpoint and put that money back into the performance side. We’ve tried to develop a really good marketing team and put together some good people who know how to go out there and market our team. From the success we’ve had this early in the season, it’s a lot easier for us to be a really good spokesperson for a company. With as much attention as we have drawn, along with the good marketing we’ve developed, that’s how we’re going about it, how we can be supportive of someone’s company who comes on board.

Henderson: A lot of fans first got to know you as “the guy who played Dale Junior in 3,” but you’ve been racing for a long time. Tell the fans a little about how you got started in racing and where that desire comes from.

McCumbee: I started racing when I was ten years old, running go-karts on dirt for four or five years. Then we decided to move to the stock cars, where we started running in the Allison Legacy Series. I met Donnie Allison and Donnie was probably the first guy who really told me, “Hey you can do this as a career if you want.” So when I graduated high school in 2002, I moved to Charlotte to go to UNCC. I felt like if I was going to make it, I needed to be up in the Charlotte area. So I went to college there, and while I was in college, I went to Andy Hillenburg’s Fast Track Driving School and was able to do well there and go to an ARCA test shortly thereafter at Lowe’s Motor Speedway.

That went so well that Andy was really impressed and told me, “Hey, why don’t you hang around for a little bit and I’ll help you out.” So I did the classic story of cleaning the bathrooms and washing cars and got my break with Andy. He put me in a racecar in 2005 in the ARCA Re/Max Series, and it’s just been going from there. I went straight to trucks in ’06. I’ve just been involved with some really good people who wanted to help me out. I did not have a ton of money to bring to the table, but these people have really just been saying if you work hard, we’ll make something happen. Between Hillenburg, Dotter and Dave Malcolmson, they have really made a difference in my career and my being successful.

Henderson: If you weren’t driving racecars, what would you be doing?

McCumbee: My dad has always built custom homes on the coast of North Carolina, so I’m sure it would be in some type of construction.

Henderson: How would you describe yourself as a driver to someone who had never seen you race?

McCumbee: It’s really hard to say. I can go off of what people have told me. I try to use my head when I’m out on the racetrack. That makes a big difference for me in the long run. Just try to be smart and remember that if you’re in a 50-lap race, that the checkered flag is not going to fall until lap 50. I try to be smart, calculated, and try to outsmart some of the competitors and be a good racer. There are a lot of really good drivers out there, but the goal is to be a good racer.

Henderson: A couple of fun questions to wrap things up. What’s the strangest gift or request you have ever received from a fan?

McCumbee: Just signing some things that you would not have expected to sign! Not necessarily anything terrible, but people really are able to bring out all kinds of stuff. It’s really cool how people keep up with you and are able to collect so much really cool stuff over the years. I haven’t had anything extremely strange so far. But I might have something really cool by the end of the year!

Henderson: What’s the one thing you couldn’t last one day without? 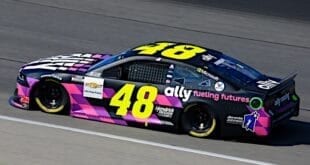 The Frontstretch 5: Big 2020 NASCAR Silly Season Dominoes Yet to Fall

The dominoes began falling in Silly Season 2020 early this year, and they certainly picked …