Each week, we’ll go through media reports, interviews, PR, and all of our own stuff to find the best quotes from the Sprint Cup race, capturing the story of how the weekend unfolded. It’s the most original commentary you’ll ever find: the truth, coming straight out of the mouths of the drivers, crew members, and car owners themselves. This week, here’s a sneak peek at what a select few were thinking following the Goody's Fast Pain Relief 500 at Martinsville Speedway.

Each week, we’ll go through media reports, interviews, PR, and all of our own stuff to find the best quotes from the Sprint Cup race, capturing the story of how the weekend unfolded. It’s the most original commentary you’ll ever find: the truth, coming straight out of the mouths of the drivers, crew members, and car owners themselves. This week, here’s a sneak peek at what a select few were thinking following the Goody’s Fast Pain Relief 500 at Martinsville Speedway:

“I’m out of breath. That was just a fun day. We didn’t have the best car at the start. We opted to lose track position and work on the car. I wanted to win for Mr. Hendrick on the 25th anniversary of Hendrick Motorsports winning.” – Jimmie Johnson

“I’m honored to be on the racetrack with guys like Jimmie [Johnson] and Jeff [Gordon] and Tony [Stewart]. Those are the guys who are the best in the business. We came up short. That was short-track racing. I would’ve done the same thing to him, and if it comes back around, I will do the same.” – Denny Hamlin, finished second

“I’m real proud of the guys on this Old Spice/Office Depot team. We had a good car all day long. I just don’t think we had enough to get by Denny [Hamlin] or Jimmie [Johnson].” – Tony Stewart, finished third

“I knew we had a good U.S. Army Chevy from practice, and it was just a matter of getting it right and being patient. We had the never-quit attitude like our soldiers and came up strong in the end.” – Ryan Newman, finished sixth

“We were a pretty good car all day, and made some adjustments there at the end that weren’t helping the car. We weren’t able to finish where we should have; we were a top-five car most of the day, I thought. Kind of unfortunate… not real happy about that finish.” – Dale Earnhardt Jr., finished eighth

“I was really happy with the performance of the team all day. Our pit stops got better as the day went on, and they did a good job with a short amount of time they had to work together. Overall, the car was a bit too tight from the center off to be a top-five car. I came here wanting to just have a solid top 10, and my team helped deliver that today.” – AJ Allmendinger, finished ninth

“We practiced real good on Friday and had hoped for a good qualifying run. The rain situation hurt us from having more practice times. We had one bad run today and it set us back. We got our lap back and battled for a top-15 finish. Proud of the Target crew for all their hard work.” – Juan Pablo Montoya, finished 12th

“If you had said that we would get away with two top-15 [finishes] in my first two short tracks with a CoT — I would have taken it. I just have to thank my crew so much – Frank Kerr (crew chief) and everyone involved. They give me awesome cars and we just keep getting better and better. I’m kind of over this short-track stuff for the moment — let’s go back to a normal speedway.” – Marcos Ambrose, finished 14th

“It was just tight all day long, and nothing we did made it any better. We started up front and stayed in the top 10 more than half the race. We wrestled it all we could without crashing. I know we took a hit in the points. It’s back to Texas and the intermediate tracks next weekend. We’re bringing another new car out for this one. This week’s over, and we’ll start focusing on next week now.” – Kurt Busch, finished 18th

Content Director Beth heads up management of our 30-person staff, acting as Tom’s main assistant with technology and personnel while working as Frontstretch’s Truck Series expert. The author of Truckin’ Thursdays and the coordinator of the site’s pre and post-race coverage, she also runs a periodic charity column that spotlights when NASCAR gives back. A childhood transplant to Texas, Beth is a 15-year writing veteran who has contributed content to BRANDT and Athlon Sports, among other outlets.
@NASCARBeth
Previous Tracking the Trucks: 2009 Kroger 250 at Martinsville
Next Who’s Hot/Who’s Not in Sprint Cup: 2009 Goody’s Fast Pain Relief 500 at Martinsville Edition 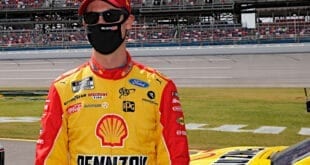 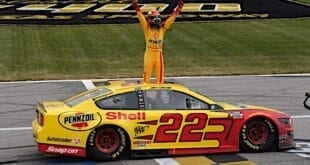