As Joey Logano entered Victory Lane Saturday in Nashville, he flashed a smile the likes of which hasn’t been seen in months. Seven weeks after struggling through a nightmare of a rookie season in Cup, 300 miles in the Nationwide Series reminded us there’s still potential there for young Joey to pair with that hype. It’s the type of experience that you’d hope would make the teen sensation feel right at home in stock cars. Too bad he doesn’t get the chance to feel it often enough.

As Joey Logano entered Victory Lane Saturday in Nashville, he flashed a smile the likes of which hasn’t been seen in months. Seven weeks after struggling through a nightmare of a rookie season in Cup, 300 miles in the Nationwide Series reminded us there’s still potential there for young Joey to pair with that hype. It’s the type of experience that you’d hope would make the teen sensation feel right at home in stock cars.

Too bad he doesn’t get the chance to feel it often enough.

Driving in a limited schedule of Nationwide events this season, Logano’s Saturday stampede through the competition won’t be able to translate into a championship fight. Despite jumping to sixth in the standings following the Nashville win, he’s already missed one race this season and will skip several more in favor of JGR’s other Cup veterans and fellow developmental prospect Brad Coleman. Indeed, there’s no turning back for Tony Stewart’s replacement in the No. 20 Home Depot Toyota, as Logano will make his eighth start in the Cup Series the second he takes the green flag at Phoenix this weekend. Eight, of course, is one too many for him to stop racing now and be eligible for Rookie of the Year in future seasons.

But there’s just something about Saturday that makes you wonder maybe, just maybe, this 18-year-old’s stuck in the wrong division with no turning back. There was a comfort level palpable to all for Logano at Nashville, stepping back into a car that gives him instant confidence he can intimidate. Indeed, Logano now has as many top-20 finishes in Nationwide (five) as he has finishes outside the top 30 in Cup, the byline of a baseball batter that hits .300 at AAA but isn’t quite ready for the majors just yet.

It’s a stat that also pains a No. 2 division struggling to stay relevant amidst a litany of start-and-parkers combined with Sprint Cup invaders. Once Logano debuted in the middle of last season, he was looked at as the one great marketing hope to make the series a bastion for young, developing talent once again. Paired against JR Motorsports’s Brad Keselowski, the two were supposed to challenge for the title while making fans realize the series offers more than a second chance to see their favorite Cup driver dominate one day early.

Instead, it’s Keselowski who fights alone, ironically just five points ahead of Logano in the standings after a slow start. Both are already 200 points behind a Carl Edwards–Kyle Busch battle for the season title. But considering Logano’s missed a race, that’s to be expected; add no less than a fifth-place finish to his tally and he’s suddenly 75 points behind and within striking distance of the top two.

Instead, Logano’s now striking back at others looking to take away his “locked-in” qualifying spot in the Cup Series. With his No. 20 clinging to 35th in owner points, the rookie’s worried not about winning, but simply bringing the car home in one piece to survive to the next week. And survive and succeed are clearly two different things in a dog-eat-dog world where the next young talent has suddenly become the next thing wrong in a sport depicted as a sinking ship all too often in the first two months.

The cruel irony for Logano is that in a different world, his ship would set sail and take an entire series along with it. But Stewart’s departure made the captains change course, sending Logano up to Cup before he’d had more than a few seconds inside NASCAR’s competitive toaster oven. That’s made Sliced Bread little more than a 99-cent loaf at the dollar store, while the series he’s supposed to be in? If you haven’t noticed, it’s more than a little stale these days.

Saturday afternoon was supposed to be the debut of Nationwide’s Dash 4 Cash program. It was a special promotion designed to reward the series’ full-time drivers, with an additional $25,000 to be awarded to the team and driver who won the first standalone race of the season. It was a chance for the new series to establish itself; instead, the money carried over as Logano won’t be eligible to compete for the program.

One can only hope that’s not a permanent byline for them both.

The author of Bowles-Eye View (Mondays) and Did You Notice? (Wednesdays) Tom spends his time overseeing Frontstretch’s 30 staff members as its majority owner. Based in Philadelphia, Bowles is a two-time Emmy winner in NASCAR television and has worked in racing production with FOX, TNT, and ESPN while appearing on-air for SIRIUS XM Radio and FOX Sports 1's former show, the Crowd Goes Wild.
@NASCARBowles
Previous Talking NASCAR TV: Creative Approach To Practice Makes ESPN Shine At Nashville… Until Nemechek’s Flip
Next Who’s Hot/Who’s Not In NASCAR’s Other Top Series 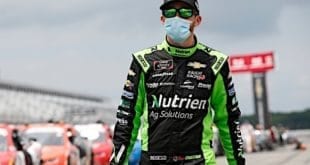 Friday Faceoff: Was Ross Chastain the Best Option for the No. 42?

Should NASCAR do something about lapped cars affecting the end of a race, or was …