The biggest story to break in NASCAR over the last few days has been Jeremy Mayfield’s suspension for a positive test for a banned substance following the May 2nd race at Richmond. A subsequent follow up B-test confirmed the previous test result. The only problem is, we don’t know hat he tested positive for. While this announcement is evidence that NASCAR is enforcing a policy that many once thought to be a policy in name only, it has cast quite a dark cloud over Mayfield. It has also altered the perception of a the driver turned owner/driver, who started the season off on such a positive note by qualifying for the Daytona 500 with his start-up team that was formed just weeks before the biggest event on the calendar. While many are shining the light on Mayfield, there is another element here that has a perception issue of its own when it comes to drug testing: NASCAR itself.

Editor’s Note: This column appears in our Frontstretch newsletter today.

The biggest story to break in NASCAR over the last few days has been Jeremy Mayfield’s suspension for a positive test of a banned substance following the May 2nd race at Richmond. A subsequent follow up “B” test confirmed the original findings, causing the sport to take what they deemed necessary action. There’s just one problem with that: we don’t know what he tested positive for. So while the announcement is evidence that NASCAR is enforcing what many once thought to be a policy in name only, it has cast quite a dark cloud over Mayfield. It has also altered the perception of others towards the former Chase participant turned owner/driver, a guy who started the season off on such a positive note by qualifying for the Daytona 500 with his startup No. 41 team that was formed just weeks before the biggest event on the calendar. But while many are shining the light on Mayfield and his transgression, there is another element here with a perception issue of its own when it comes to drug testing: NASCAR itself.

The sanctioning body’s timing of the Mayfield announcement is suspect for a number of reasons. First off, it came just two days after Los Angeles Dodgers outfielder Manny Ramirez tested positive for steroids. While it is most unlikely Mayfield tested positive for hormone (or flat top) therapy, the timing of it certainly raised my ridiculous caterpillar-like eyebrows. After all, this is the NASCAR that perpetually tries to and mirror itself among other professional sports as of late, constantly catering to the casual fan who is familiar with stick ‘n’ ball sports in an effort to gain some sort of popular legitimacy – which, in effect, delegitimizes it in the eyes of Manny, I mean, many…

The timing gets even stranger when you consider the news came just three days after former NASCAR driver Kevin Grubb was found dead in a Virginia hotel after a self-inflicted gunshot wound to the head ended his life at age 31. Grubb was suspended in 2006 following a refusal to submit to a second test; ironically, that followed an incident which also came at Richmond International Raceway. Might NASCAR have made an example of Mayfield to keep that story off the front page and out of the headlines? Is this little more than tragic coincidence… or preponderance of evidence?

Personally, I think it is the former, but the fact that there is pause for consideration points to the key issue here — what is NASCAR’s criteria for what constitutes an illicit substance?

One would hate to cast those aspirations of doubt on the sanctioning body; after all, for years fans and drivers alike have chided the premier motorsports authority in North America for not having a stringent or stated substance abuse policy. Now, when it finally does begin to enforce it, some cry foul. Why? Because of a name that is often mentioned and will not be soon forgotten: Tim Richmond. Richmond was the first driver who was suspended after failing a drug test in the late 1980s — except the failure was a smokescreen to oust him from the sport. After falling ill following the 1986 season, Richmond discovered he was suffering from AIDS — the disease he’d eventually die from three years later. Put on a cocktail of medication, Richmond attempted only eight races in ’87 before being forced to submit to a drug test prior to the Busch Clash in February 1988. At that point, NASCAR — who was unsure what exactly was wrong with Richmond and how he contracted whatever it was that he had (a reoccurring case of pneumonia was the reason given) — revealed the driver has a positive drug test and would be suspended indefinitely.

Richmond, like Mayfield, maintained it was the result of antihistamines and over the counter cold remedies; however, NASCAR was unprepared to let the driver compete in the series in his condition – regardless of what actually got him to such a weakened state. While Mayfield has remained mostly mum following the suspension – offering little more than a statement claiming the aforementioned over the counter and prescription cold medicines as reasons for his failure – Richmond was a bit more brash, hiring a plane to fly over Daytona International Speedway towing a message that read, “I Miss You Fans – Tim Richmond.”

NASCAR maintains that it does not want to be put in a box with a list of banned substances, and therefore will not release the list to the public (which reportedly was presented to the drivers and teams back in December.) While this is understandable, it is also very frustrating. Much like the mythic NASCAR rulebook – which I can honestly tell you really DOES exist, having read it – not having something so basic available for public consumption clouds the perceived notion that there are actual rules in the sport and guidelines of which to follow. The make-it-up-as-we-go-along criticism of NASCAR will continue until such information is made available and not held under such a veil of secrecy, particularly when it comes to such a hot button issue that is currently in the forefront of American sports.

After all, “other” professional sports are transparent with their rules and regulations, aren’t they?

Editor’s Note: If you liked Vito’s column, it’s time to subscribe to the Frontstretch newsletter… because that’s the only place you’ll find Vexing each week. That’s right; you won’t get this unique commentary you can’t find anywhere else on the site unless you click here to get it sent straight to your email inbox every day… FOR FREE!

Vito is one of the longest-tenured writers at Frontstretch, joining the staff in 2007. With his column Voice of Vito (monthly, Fridays) he’s a contributor to several other outlets, including Athlon Sports and Popular Speed in addition to making radio appearances. He forever has a soft-spot in his heart for old Mopars and presumably oil-soaked cardboard in his garage.
Previous Driven To The Past: The Best Thing Since Sliced Bread
Next BSNews! Real NASCAR News That Fits the Headline Title 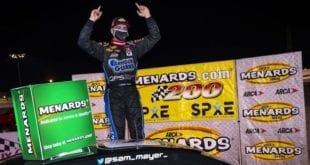 Does Everyone Owe Jeremy Mayfield An Apology? He Says….