*In a Nutshell:* Ron Hornaday, Jr. took the checkered flag 0.202 seconds ahead of Mike Skinner to win the AAA Insurance 200 presented by J.D. Byrider Friday night at O'Reilly Raceway Park. Hornaday, Jr. held off a late race charge from Skinner, who had a fresh set of tires, to score his record fourth consecutive Truck Series win. Aric Almirola, Dennis Setzer and Colin Braun rounded out the Top 5. *Who Should Have Won:* Ron Hornaday, Jr. Hornaday, Jr. qualified his No. 33 VFW.org Chevrolet in the fourth position after running fourth in the final practice session. The driver of the No. 33 Chevrolet led twice for a total of 67 laps, the most of any driver, on the way to his 44th career Camping World Truck Series win.

In a Nutshell: Ron Hornaday, Jr. took the checkered flag 0.202 seconds ahead of Mike Skinner to win the AAA Insurance 200 presented by J.D. Byrider Friday night at O’Reilly Raceway Park. Hornaday, Jr. held off a late race charge from Skinner, who had a fresh set of tires, to score his record fourth consecutive Truck Series win. Aric Almirola, Dennis Setzer, and Colin Braun rounded out the top five.

Who Should Have Won: Hornaday, Jr. Hornaday, Jr. qualified his No. 33 VFW.org Chevrolet in the fourth position after running fourth in the final practice session. The driver of the No. 33 Chevrolet led twice for a total of 67 laps, the most of any driver, on the way to his 44th career Camping World Truck Series win.

1. How did Caitlin Shaw fare in her Camping World Truck Series debut?

Just about a month ago, Caitlin Shaw earned approval from NASCAR to race in the Camping World Truck Series after spending some time in the NASCAR Whelen All-American Series. The rookie qualified her No. 1 Red Horse Racing Toyota in the 32nd position after running 25th-fastest in the final practice. Early in the race, the 19-year-old driver had worked her way up to 24th place. Though she was put two laps down early by the leaders, Shaw continued to gain positions on the other drivers that were a lap down with her.

On lap 38, she spun on her own into the outside wall. Despite the damage suffered in the wreck, Shaw’s pit crew made repairs to her truck and allowed her to finish the race. Though she wanted to finish on the lead lap, Shaw was credited with finishing 24th, 16 laps down.

Any driver making their Camping World Truck Series debut doesn’t want to be involved in any kind of wreck on the track and hopes only to finish the race. While Shaw did end up wrecking her truck, she was able to at least make it to the checkered flag. She earned quite a bit of valuable short track time and should be able to take the experience with her and put it to good use in her future.

No word yet whether the rookie will be making any more starts in the No. 1 Toyota this season.

2. Why won’t NASCAR use double-file restarts for the Truck Series in 2009?

When NASCAR announced they would be implementing the double-file restarts for the Sprint Cup Series at Pocono Raceway in June, it was mentioned that a change could hit both the Nationwide and Camping World Truck Series in the future. The Nationwide Series made the switch at Daytona International Speedway earlier this month, but the Truck Series has yet to follow suit.

Last weekend at Kentucky Speedway, Truck Series director Wayne Auton said, “Sooner or later, I see it coming,” when he was asked about double-file restarts. But it looks like fans will be waiting until at least the 2010 season before they get to see the leaders restart side-by-side.

Friday night, Krista Voda reported during the Truck Series setup show that Auton told teams there would be no double-file restarts during the 2009 season. But why wouldn’t NASCAR want to go ahead and allow the leaders to participate in them?

The Truck Series is perhaps the one series of the top three tiers in NASCAR that really needs to change the restarts. In the majority of restarts in the Camping World Truck Series, the drivers that are one or more laps down typically consist of start and park teams that have little hope of racing at the same speed the leaders run.

Saturday night showed a perfect example of that when Chris Fontaine got stuck in multiple three-wide battles with the leaders on a lap 44 restart. Fontaine’s truck just wasn’t as fast, creating a bottleneck that left the slower truck stuck in the middle with nowhere to go.

The decision to delay moving the Truck Series to double-file restarts may have something to do with the current pit road rules, though. In the Sprint Cup Series, teams who would like to earn their lap back can become “wave around” cars. If they opt not to pit under caution, they will earn back one lap and once the green flag flies, the wave-around cars are free to pit under green.

Well, there is no way any Truck Series team would want to be a part of the wave-around trucks when tires and fuel require two separate pit stops. Pitting under green already puts a driver well out of sequence with the rest of the field.

Though the Camping World Truck Series will not be starting double-file restarts during the 2009 season, there’s still a very real possibility they’ll be implemented before the start of the 2010. And if NASCAR makes the decision to allow double-file restarts with the leaders, expect the racing to get that much better without those lap down trucks in the way.

No. of Rookies in the Race: Four

Rookie Of The Race: Buescher

“It was a great night for us. I knew the truck was fast all night. We were within a tenth of the leaders all night long. Just couldn’t pass, whether I was a little bit tight or a little bit loose or whatever it was. I was the Raybestos Rookie of the Race with a sixth-place finish and not where we were running all night — so I’m real happy with it.” – James Buescher

Hornaday, Jr. ran the Nationwide Series race at O’Reilly Raceway Park on Saturday night. He led 15 laps behind the wheel of the No. 33 Vlasic Chevrolet on his way to a sixth place finish in the Kroger 200 benefiting Riley Hospital for Children.

Hornaday, Jr. now holds the closest margin of victory in a Truck Series race at O’Reilly Raceway Park. He finished 0.202 seconds ahead of Skinner, breaking the previous record of 0.261 seconds set in August, 1999.

The AAA Insurance 200 marked Roush Fenway Racing’s 700th Camping World Truck Series start. Braun started his No. 6 Conway Freight Ford on the pole and went on to finish fifth in his RFR-fielded truck.

In the overall championship, Hornaday, Jr. expanded his points lead once again. He now leads Skinner, who moved up one spot, by 174 points. Matt Crafton‘s 16th place finish dropped him to third in the standings, just two points behind Skinner. Todd Bodine remains in fourth, and David Starr moved up one spot to round out the top five.

Brian Scott finished 12th and dropped one spot to sixth. Malsam remains in seventh, 405 points behind leader Hornaday, Jr. Setzer moved up one spot to eighth, and Terry Cook dropped one spot to ninth. Braun’s seventh top 10 finish of the season moved him up two spots to round out the top 10.

“I have to thank Kevin and DeLana (Harvick, team owners). People ask me how I do it, and it is those two people right there. They just keep putting trucks underneath us and putting the right people in the shop. I have to thank Mark Smith and everyone at the motor shop, PME, and especially all of the fans. This is so cool to come around and see them put their hands up. This is what makes it so special.” – Ron Hornaday, Jr.

“I could have hit him, but I ain’t made like that. He may have done it to me, but that’s alright. When I shave in the morning I like who I see. I don’t want to give a negative interview because we finished second. I don’t like to finish second more than anybody. It was a good points night. We’re not throwing in the towel.” – Mike Skinner, finished second

“I feel like we had a really good truck in the middle of the race. I think I just got out experienced. I don’t have a lot of short track experience here or anywhere for that matter. I feel like car No. 6 was fast, but at the end I guess I just got outfoxed.” – Colin Braun

Up Next:
The Camping World Truck Series heads to Nashville Superspeedway next Saturday for the Toyota Tundra 200. In 2008, Johnny Benson beat Erik Darnell to the checkered flag by nearly a second to score his third consecutive victory and fourth of the season. Coverage begins at 7:30 pm EST; the race can also be heard on your local MRN affiliate.

Content Director Beth heads up management of our 30-person staff, acting as Tom’s main assistant with technology and personnel while working as Frontstretch’s Truck Series expert. The author of Truckin’ Thursdays and the coordinator of the site’s pre and post-race coverage, she also runs a periodic charity column that spotlights when NASCAR gives back. A childhood transplant to Texas, Beth is a 15-year writing veteran who has contributed content to BRANDT and Athlon Sports, among other outlets.
@NASCARBeth
Previous The Big 6: Questions Answered After the 2009 Allstate 400 at the Brickyard
Next Nationwide Series Breakdown: 2009 Kroger 200 at IRP 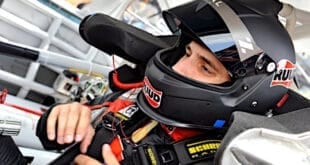 James Buescher Returning to NASCAR With Niece Motorsports at Texas