*In a Nutshell:* Ron Hornaday, Jr. took the checkered flag 0.944 seconds ahead of Brian Scott to win the Toyota Tundra 200 Saturday night at Nashville Superspeedway. Hornaday, Jr. again appeared to have the most dominant truck on the track, and easily held on to lead through a green-white-checkered finish. Colin Braun, Timothy Peters, and Matt Crafton rounded out the Top 5. *Who Should Have Won: Ron Hornaday, Jr.* Despite having the hood up on the No. 33 Longhorn Chevrolet prior to the pace laps, Ron Hornaday, Jr. made no secret of the fact that he had a very strong truck. He first took the lead on lap 34 when then-leader Timothy Peters got stuck behind the truck of Stacy Compton.

In a Nutshell: Ron Hornaday, Jr. took the checkered flag 0.944 seconds ahead of Brian Scott to win the Toyota Tundra 200 Saturday night at Nashville Superspeedway. Hornaday, Jr. again appeared to have the most dominant truck on the track, and easily held on to lead through a green-white-checkered finish. Colin Braun, Timothy Peters, and Matt Crafton rounded out the top five.

Who Should Have Won: Hornaday, Jr. Despite having the hood up on the No. 33 Longhorn Chevrolet prior to the pace laps, Hornaday, Jr. made no secret of the fact that he had a very strong truck. He first took the lead on lap 34 when then-leader Peters got stuck behind the truck of Stacy Compton. The driver of the No. 33 Chevrolet went on to pull out to a more than two-second lead late in the race before a caution set up the green-white-checkered finish. In all, Hornaday, Jr. led a total of 115 of the 150 laps on the way to his sixth win of the season.

1. How did Travis Kvapil fare in his return to the Truck Series?

On Saturday night, 2003 Camping World Truck Series champion Travis Kvapil piloted the No. 51 Miccosukee Resort and Casino Toyota in place of Kyle Busch, who was in Iowa for the Nationwide Series race. Usually, Brian Ickler fills the ride when Busch has Nationwide or Sprint Cup Series obligations… but Ickler was also in Iowa driving the No. 32 car for Braun Racing.

Kvapil started in the 11th position and struggled with a tight truck most of the night. Less than a third of the way through the running of the Toyota Tundra 200, Kvapil then narrowly avoided a problem with Mario Gosselin when he slid up the track and nearly into the No. 51. That gave the team a dose of good luck… but they couldn’t convert that to the handling of his race car. Though the team continually worked on the truck throughout the night, no amount of adjustments seemed to help the drive of the No. 51 Miccosukee Resort and Casino Toyota enough to allow him to challenge for the lead.

“We were tight from the time we unloaded the truck, but we thought we were close to where we needed to be after practice,” Kvapil said. “The truck would take off on the restart and then go tight again after a few laps. Doug (George, crew chief) and I talked about it and learned what we should have done; but unfortunately, we didn’t have it for the race. Hopefully, the opportunity will present itself again and we’ll get another run in the trucks for Billy (Ballew).”

Overall, Kvapil could have had a worse night. He managed to stay on the lead lap and finish in the 11th position despite having dropped as far back as 16th late in the race. Granted, that’s nothing compared to what Busch usually does in the truck… but it’s not a terrible run for a former champ looking to jump in the driver’s seat anywhere he can.

2. Does anyone have what it takes to catch Ron Hornaday, Jr.?

Prior to the running of the Toyota Tundra 200, Hornaday, Jr. held a 174-point lead over Mike Skinner in the standings. That is the largest margin a points leader has held over second place in the history of the Camping World Truck Series. Hornaday, Jr.’s fifth consecutive win helped to expand that lead to 216 points, and the team shows no sign of stopping. But does anyone have what it takes to realistically challenge the driver of the No. 33 Chevrolet?

Hornaday, Jr. has finished outside the top 10 only twice in the first 14 races this season. After missing out on a series high fourth championship by just seven points, the driver of the No. 33 Chevrolet arrived at the season opener more determined than ever to win the championship; and right now, it looks like the 51-year-old has a very real shot at breaking yet another record in the books.

“Right now, the KHI (Kevin Harvick, Inc.) stuff with (Ron) Hornaday, Jr. — they are in their own zip code,” Skinner said.

Scott echoed Skinner’s sentiments. “Ron (Hornaday, Jr.) is a legend,” he exclaimed. “He’s the man.” But the driver of the No. 16 also credited Hornaday, Jr. for his improvement on the race track.

“Ron is a really good friend of mine. He has been a big part of my development,” Scott said. “He had taken me under his wing and taught me some of the finer points of racing in the NASCAR Camping World Truck Series, like getting better on restarts. That is one of the reasons I have been able to put myself in a position to challenge him late in some of these races.”

It’s true that Hornaday, Jr. and the No. 33 team appear to be unstoppable right now. With an average finish of 5.9 and only one DNF this season, the team has shown they are championship-caliber yet again. It will be hard for anyone to stop this driver, who appears to be on a tear for his record fourth Camping World Truck Series championship.

Barring a major disaster in multiple races, it’s going to be tough for any driver to even challenge the driver of the No. 33 Longhorn Chevrolet for the championship, much less hope to pass him. Yet despite the fact that Hornaday, Jr. is running away with the title with 11 races still left in the season, scoring his fourth championship would be a feel-good story, one that would keep fans and drivers happy all the way through Homestead in November.

No. of Rookies in the Race: Four

No. of Rookies to Finish in the Top 10: Two; Johnny Sauter, finished sixth and Tayler Malsam, finished ninth

Rookie Of The Race: Sauter

Hornaday, Jr. became the first Truck Series driver to win at all three concrete tracks on the schedule with his win Saturday night in the Toyota Tundra 200 at Nashville Superspeedway. He also is the first driver to win five races in a row in NASCAR since Bobby Allison and Richard Petty both did it in 1971.

J.R. Fitzpatrick made his return to the Camping World Truck Series Saturday night. In the No. 4 Chevrolet he shares with Ricky Carmichael, Fitzpatrick struggled with radio troubles early on before he got loose and wrecked. After spending 78 laps in the garage, Fitzpatrick pulled the No. 4 Equipment Express Chevrolet back onto the track to get some seat time; he went on to finish 23rd.

As mentioned above, Hornaday, Jr. again extended his points lead. He now sits 216 points ahead of Crafton, who moved back up to second after a top five finish. Skinner dropped one spot and finds himself 32 points behind Crafton. Todd Bodine and Scott, who each moved up one spot with a runner-up finish, round out the top five.

David Starr dropped one spot to sixth and finds himself 426 points behind the leader. Malsam remains in the seventh position, just 16 points ahead of Dennis Setzer in eighth. Braun and Rick Crawford, who each moved up one position in the standings, round out the top 10.

“I have to thank Kevin and DeLana [Harvick] for giving me such good trucks. Five in a row. Wow! This is pretty cool. I’m so proud that I finally got a Sam Bass guitar. I had the one-armed bandit [Brian Scott] hounding me at the end. If he could have caught me, he would have bumped me to get by. Brian Scott is a good friend of mine.” – Ron Hornaday, Jr.

“He’s the man in the Truck Series. I congratulate Ron [Hornaday, Jr.] on five in a row–that’s an awesome accomplishment. I hope some day to accomplish something like that in my career. I wish I could have taken a Toyota to Victory Lane tonight. Everybody wants that Les Paul guitar by Sam Bass — it’s the coolest trophy out there. Tonight wasn’t our night to get it.” – Brian Scott, finished second

“It’s unbelievable. We both made history tonight. I don’t know how to say this. All I can talk about is our preparation and how hard he drives. I don’t know what to say. How ’bout that Longhorn Chevrolet tonight? We go every week to race to win. That’s all we can do, and if everything falls right, we’ll win.” – Winning crew chief Rick Ren

Up Next:
The Camping World Truck Series heads to Bristol Motor Speedway on Wednesday, August 19th for the O’Reilly 200. In 2008, Busch survived multiple late-race restarts and a green-white-checkered finish to win at the World’s Fastest Half-Mile. Coverage begins at 7:30 PM EST; the race can also be heard on your local MRN affiliate.

Content Director Beth heads up management of our 30-person staff, acting as Tom’s main assistant with technology and personnel while working as Frontstretch’s Truck Series expert. The author of Truckin’ Thursdays and the coordinator of the site’s pre and post-race coverage, she also runs a periodic charity column that spotlights when NASCAR gives back. A childhood transplant to Texas, Beth is a 15-year writing veteran who has contributed content to BRANDT and Athlon Sports, among other outlets.
@NASCARBeth
Previous Series Regular Brad Keselowski Wins Inaugural NNS Event at Iowa
Next Nationwide Series Breakdown: 2009 U.S. Cellular 250 at Iowa 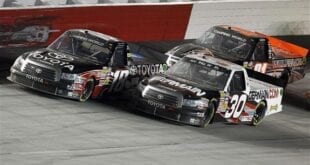 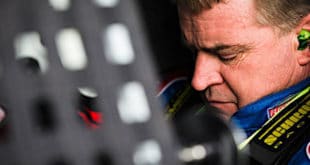 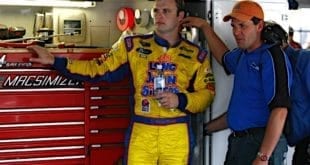