Rain forced the postponement of Sunday’s race until Monday afternoon, meaning there will be no bubble chatter this week as I had to work and therefore wasn’t able to listen to the in car radio communications during the event. I tried to get out early, but when I asked my boss if I could leave early to go home and watch the race he gave me the look that said get out of my office and go back to work, now. So I hid in a corner of the plant, huddled with a radio, listening to see if Scott Speed would make any headway into John Andretti’s hold on 35th, and if Robby Gordon would just plain lay one upside David Stremme’s head. So to see how the Sunoco Red Cross Pennsylvania 500 played out for our bubble teams, read on in this week’s edition of the bubble breakdown.

Breaking down the Bubble:

Rain forced the postponement of Sunday’s race until Monday afternoon, meaning there will be no bubble chatter this week as I had to work and therefore wasn’t able to listen to the in-car radio communications during the event. I tried to get out early, but when I asked my boss if I could leave early to go home and watch the race he gave me the look that said get out of my office and go back to work, now. So I hid in a corner of the plant, huddled with a radio, listening to see if Scott Speed would make any headway into John Andretti’s hold on 35th, and if Robby Gordon would just plain lay one upside David Stremme’s head. So to see how the Sunoco Red Cross Pennsylvania 500 played out for our bubble teams, read on in this week’s edition of the bubble breakdown.

Focusing on the Bubble:

Speed and the No. 82 Red Bull Toyota again made up some ground on the No. 34 Front Row Motorsports Chevrolet, but once again, it really wasn’t much of a gain. Speed finished on the lead lap for just the third time this year and broke an eight-race streak of finishes of 31st or worse by posting a solid 23rd place performance. After a little trouble in qualifying put the team back in 37th, they got some breaks and good pit stops that enabled him to move steadily through the field and post the best finish of any of the bubble teams in the race. Andretti, on the other hand, again played the slow and steady wins the race thing to perfection. After starting 35th, Andretti managed to finish as the last car on the lead lap in 30th. They even stayed out on lap 55 to lead a lap and get five bonus points. Don’t laugh, as this is an aggressive move for this team. For their efforts, they maintain the 35th spot in the owner’s standings with Speed’s Team Red Bull Toyota gaining just 16 points — the gap now stands at 171 with 15 races left in the season.

Robert Yates Racing’s No. 98 Ford Fusion driven by Paul Menard: What looked like a disaster early for Menard turned into a pretty decent 26th place run. On lap 53, Menard had a right rear tire go down and wound up three laps down with almost 150 laps to go in the race. But luck was on his side as three more cautions waved within the next 100 laps with Menard being in position for the Lucky Dog award each time, thus putting himself back on the lead lap to stay. Not a great run, but a nice one that the team needs to build on moving forward.

Penske Championship Racing’s No. 12 Dodge driven by Stremme (In the red corner) and Robby Gordon Motorsports’ No. 7 Toyota driven by Gordon (In the blue corner): Well, it all seemed to start on lap 149 when Gordon crashed into the Turn 3 wall, with Stremme unable to avoid the No. 7 and making contact. Robby was not happy, and made it clear over his radio that he was gonna wreck Stremme and didn’t care if NASCAR parked him or not. When he caught back up to Stremme, he beat on him a bit but didn’t dump him. Stremme then moved over, presumably to let Gordon go, then came back up the track and wrecked him again. For this NASCAR parked both cars for five laps, relegating the drivers to 32nd and 33rd place. When the teams behind you in the owner standings are completely anemic and you’re out of Chase contention, you can do this sort of thing without taking a big hit in the standings. Still, it makes me long for the days when you’d just go out behind a dumpster after the race and settle it like men. My guess is this will spill over to the Glen next week…

Prism Motorsports No. 64 Toyota driven by Mike Wallace this week: Here’s one for those of you who still believe that all 43 teams intend to run and finish every race and there is no such thing as start and park teams. Wallace was black flagged to the garage on lap 13 because they had NO PIT CREW! NONE! Apparently, they had so much confidence in their Goodyear tires and their fuel guy figured out if they went into fuel conservation mode on lap one, they could go the distance without pitting. So the crew just took the afternoon off. Unfortunately, NASCAR mandates you have a pit crew in your pit stall. The official reason listed on NASCAR’s Web site for the team’s withdrawal is: Parked. As in Start and Park.

What to look for next week:

First of all, look for qualifying to be rained out. I know this because I go to the Glen and wind up standing in the rain waiting for qualifying to be canceled. Ten minutes after it gets called, the sun comes out, the track dries and we have to suffer through a Nationwide practice session when really everyone there wants to see Boris Said race in the Cup race on Sunday. Not that I’m bitter or anything. Anyways, if qualifying isn’t rained out you are probably looking at Dave Blaney, David Gilliland (in the 70 this week), and Joe Nemechek missing the race. If Gordon dispenses with Stremme early enough, he is more than capable of racing his way into the top 10, and Said is a potential candidate to join him there. But here’s the big prediction, so sit down before you read this. Phoenix Racing’s No. 09 driven by Ron Fellows is going to win! Stop laughing… I have scientific proof. In 1999, Fellows posted a second place finish at the Glen, and five years later he again finished second. So now, five years later, he’s guaranteed a second… but needs something to put him over the top. Jamie McMurray and Brad Keselowski are the last two drivers to win a Cup race and not be in the car the following week. Both times, the driver scheduled to drive the car the following week was Mike Bliss. Looking ahead two weeks from now, the scheduled driver of Finch’s No. 09 Dodge at Michigan was scheduled to be… Mike Bliss. Editor’s Note: At press time, we were informed Bliss was released from his ride at Phoenix Racing. Time will tell whether that messes up Mike’s prediction…

So, there you have it, your bubble breakdown from Pocono. I won’t be here next week, as I will be camping in the infield at the Glen ’til they throw us out on Monday morning. But your bubble breakdown will be here as scheduled, so check back to hear about Fellow’s upset win and remember that you heard it here first! And be sure to check out the head-to-head picks in Friday’s newsletter between Phil and I. They may be the last as Phil and I plan on meeting at the Glen and if he beats me again… I’m going to kill him.

So until next week, so long from the bubble!

The Frontstretch Staff is made up of a group of talented men and women spread out all over the United States and Canada. Residing in 15 states throughout the country, plus Ontario, and widely ranging in age, the staff showcases a wide variety of diverse opinions that will keep you coming back for more week in and week out.
@Frontstretch
Previous Rookie Scott Speed Finds His Lucky Charms In The Pocono Mountains
Next Who’s Hot/Who’s Not in Sprint Cup: 2009 Pennsylvania 500 at Pocono Edition 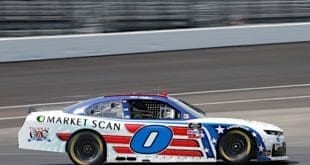 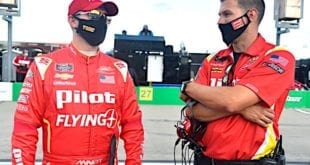