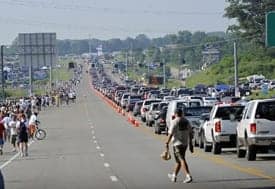 The Quaker State 400 was, heading in, a joyous occasion for long-suffering race fans, who just wanted to have a NASCAR Sprint Cup Series race of their own.

Well, they got their wish; but while it was an interesting enough race, it calls to mind the old warning that you might want to be careful what you wish for.

The race might have been too successful, if that’s possible. Sparta, Ky. isn’t exactly on the outskirts of nowhere, but it’s not a long-distance phone call, either. In all fairness, Loudon, N.H. is not Metropolis, but it does have a plan that has been worked out over the years to get people into and out of the speedway.

Atlanta and Talladega have their own problems with pre- and post-race traffic patterns, and they are near major cities. The difference is, there is more than one way in and out, and if you’ve been going long enough, you have a super-secret way or two up your sleeve.

The crowd on hand at Kentucky for the first Cup race at the track was perhaps a bit too good, generating horrendous traffic jams to the point some fans reportedly never made it through.

Kentucky had none of that, or at least not enough to prevent traffic backups that lasted five hours in some cases and caused many, including some big shots in the state government who were scheduled to play a role in opening ceremonies, to miss the race.

Look, races draw big crowds… most of the time. An inaugural ups the ante, especially one with as much juice as Kentucky’s. It was built with great fanfare, the track sort of languishing on the vine for awhile trying to get a Sprint Cup race. To break through, they filed suit against NASCAR and other folks only to fail… after a decade, they finally got the race of their dreams only through new owner Bruton Smith.

They’d had the Nationwide Series and Camping World Truck Series, the IndyCar Series, ARCA… good series all, but not Cup. They also didn’t have Cup crowds, which is what caused the problems today.

After the race, the track’s general manager made an interesting statement. He said that it was the number of cars that overwhelmed his staff and parking lot attendants, not the number of fans.

OK, if everyone drove themselves to the track, I could see that. A hundred-thousand-plus vehicles is a bunchaton, especially if they all arrive at the same time. But still… it’s manageable if you have a plan.

KMS officials had a plan; it just went to hell in a handbasket very early on Saturday.

Take Denny Hamlin, for instance. Early Saturday afternoon, Hamlin was like thousands of others headed to Kentucky Motor Speedway…stuck on the interstate.

Sitting in bumper-to-bumper traffic, Hamlin pulled out the old cellular and started Tweeting.

“Bad news is I’m prolly not going to make the drivers meeting in 3 hours because I’m in this traffic with everyone else,” was how it went. That was around 2:30 p.m. ET.

“Good news, I’m starting in the back anyway.”

Had he missed the driver’s meeting, Hamlin would have had to start from the tail. He was already there anyway because he had to change engines on Friday. He made it into the track in plenty of time for the driver’s meeting, but any type of public “sitting in traffic” message can be bad publicity.

Joe Gibbs, winning owner of Kyle Busch’s Toyota, had a different view; he was amazed at the size of fan support, 107,000 strong.

“One thing I really want to emphasize is this crowd, I was out there coming back in from hospitality, honestly, they were 30 abreast trying to walk up to get in the stadium,” Gibbs said. “They were coming over the top of the hills. This is fun to be at a place like this. It was exciting.”

Gibbs is a car owner, and it’s in his best interest to be enthused about the gate. NASCAR, despite the PR problems this debacle is going to raise, had to be ecstatic that the place drew a full house. There’s not many tracks on the schedule that can say that these days, not even Bristol.

It was a good omen for the sport that it played so well in Kentucky. New markets are to be treasured, and once they get the traffic pattern dialed in, it will be lights-out.

As for the race, it was same-old, same-old. A 1.5-mile track, not a lot of banking…the drivers spent most of their time the first 200 laps screaming “tight!” or “loose!” and complaining about the handling.

Near the end, it boiled down to pit strategy and crashes, as it usually does, and Kyle Busch wound up winning it for his third victory of the season. He also wound up with the point lead.

The key to the traffic on the track at Kentucky was track position and Kyle Busch had it all night.

What it came down to was track position. Busch had it, nobody else did, the way it worked out. That, unfortunately, is another word for “there’s not a lot of passing here.”

“Yeah, certainly it’s an important racetrack to have track position, to start up front,” Busch said after winning the race. “There were a few cars that came from the back up to the middle part, and a couple guys from the middle that maybe moved up to the top eight or something like that.

“But, you know, up front, it seems like it’s a lot harder to pass. There were times when I was gaining, the 2 [Brad Keselowski] would get out on me and I would kind of gain on him once we got to traffic. I felt my car was better in traffic. This place is so wide and you carry so much momentum, you’re on the throttle for so long that there’s really not much time for you to gain on the next guy in front of you, you know.”

There is speculation that the place will be repaved soon, and Busch addressed that.

“You know, we’ll see what transpires here. I’ve heard rumors of repaving this place. Hopefully they ask us before they do it.”

They don’t, usually, but maybe, as a way of erasing some painful memories, they just might this time.