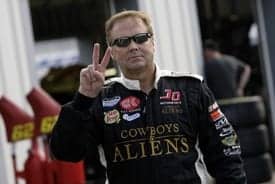 The latest fuel mileage chapter of NASCAR racing 2011 was written on Friday night, with Brad Keselowski emerging the victor of a cat-and-mouse duel between him and Kevin Harvick in the closing laps, running up to each other while saving gas over the final green flag run. It marked the first win of the season for the defending series champion, with Harvick, Kyle Busch, Kasey Kahne and polesitter Elliott Sadler rounding out the top 5.

In an event that was a departure from previous Kentucky races and full of green flag runs, Sadler managed to wrestle the points lead away from Reed Sorenson on a night that saw Turner Motorsports struggle both on track and in the pits. Coupled with an early spin for Ricky Stenhouse Jr., the former Cup regular scored his series’ regular leading ninth top-5 finish to take the point heading to Loudon.

Joey Logano was a non-factor all evening and finished 10th after winning the previous three Nationwide Series races at the facility. The top 30 in owner points remained unchanged after Friday night’s race.

*Elliott Sadler* and the No. 2 team seemed poised for a strong run after the driver scored his first pole on a 1.5 mile track since Texas back in 1998, but trouble in the pits threatened to derail their move back to the top of the standings. The cycle of yellow flag pit stops on lap 102 saw both Sadler and his closest competition, Sorenson, experience trouble on pit road. The No. 2 car had dropped to 20th by lap 118 after the team lost time investigating what was reportedly a rubbing track bar mount. But Sadler charged back through the field on a night that Sorenson proved to have his hands full both with the No. 30 car and team, and the top-5 finish was enough to score him the title of best running Nationwide regular at the finish.

*Michael Annett’s* move to RWI has been one of the more inconsequential signings of the 2011 season so far, but the former hockey player has turned it around in recent weeks. Finishing seventh on Friday night, Annett posted his third consecutive top 10 finish, a career first. Ironically, Kentucky one year ago marked the first of three consecutive top 10 finishes for Brendan Gaughan, the last time the No. 62 team at RWI accomplished the feat.

Finishing ninth and losing further ground in the points race is not what *Ricky Stenhouse Jr.* and the No. 6 team were shooting for after posting a top 3 qualifying effort, but considering the way the the race started it had to be a relief. Trying to come to pit road on lap 44 with a tire going down, Stenhouse carried too much speed onto the apron and looped his Ford around between turns 3 and 4. Busted for speeding on pit road during the ensuing stop, Stenhouse was a lap down and forced to play catch-up for much of the rest of the night. The top 10 finish nonetheless equaled his career best at Kentucky.

*Kenny Wallace* finished in the sixth position after playing the role of honorary race starter the night before, a career best result for him at the track and his first Kentucky top 10 since 2002.

While *Jason Leffler* made a habit one season ago of scoring top 10 finishes when his primary ride was overtaken by Kasey Kahne, that same magic hasn’t carried over for the Turner Motorsports duo of Reed Sorenson and Mark Martin in 2011. Plagued by pit troubles and an ill-handling No. 30 Chevrolet all evening, Sorenson posted a 17th place result that lost him the points lead, was his worst finish since Bristol back in the early spring, and marked only the second time in 2011 he didn’t finish in the top 15. There’s something to be said about consistency; here’s hoping the title damage done was worth it to Dollar General to put Martin in the seat for a few cameos.

*Robert Richardson* got turned around on lap 101 as Brian Scott tried to pass him on the low side of turn 1, an incident that backed the No. 23 car into the fence and shortened it. The R3 team got Richardson back on the track, but on lap 134 the aerodynamic challenges the damage posed caught up to Richardson, sending the No. 23 back into the wall. The resulting hit completely smashed the rear end of the machine back into itself, rendering it impossible to drive back to pit road. Richardson finished 33rd.

*Jeremy Clements* has done an admirable job keeping his equipment out of trouble this far into 2011; the No. 51 team only has two cars in their stable. Unfortunately, that stretch of good luck ran during qualifying Friday afternoon, where contact with the fence in time trials forced Clements into a backup machine for the event. The backup car was woefully off the pace; the team finished 24 laps down in 31st.

*Will Kimmel* was correctly referred to ESPN’s broadcast crew as a product of racing royalty, the son of nine-time ARCA champion Frank Kimmel, but the youngster’s Nationwide debut was a royal disappointment. In what the driver termed a tryout race with the No. 39 team, Kimmel lost the rear end of his machine on lap 65 and slammed the turn 4 wall, finishing the team’s day in the 35th position. Go Green Racing is another one of those teams with an extremely limited stable of race cars, and Kimmel’s post-race remarks made clear that his mistake had really put the team in a hole heading into Loudon.

The Kentucky Speedway apparently has it out for *Morgan Shepherd*. The same track that nearly, in the driver’s own words, put his team out of business after a qualifying wreck back in 2007, bit the No. 89 team again this weekend, though it wasn’t without help this time; immediately following a lap 106 restart, Charles Lewanadoski ran into the back of Shepherd’s No. 89 car and turned him into the inside wall on the backstretch, causing heavy damage to the front end of Shepherd’s machine. Shepherd remarked that the damage will not be able to be repaired in time for Loudon, meaning he will have to turn to his back-up machine, presumably the No. 55 car that the team has fielded as a part-time start-and-park for Brett Rowe in select races this year. The chances of that car running as competitive as the primary are slim. The 34th place result marked Shepherd’s fourth consecutive DNF, his longest such streak since last summer.

*Underdog Performer of the Race: Blake Koch* Two laps down in 22nd is not going to rank amongst the great underdog performances of a track that’s produced first-time winners including David Gilliland and Stephen Leicht, but for Koch, it was still an admirable effort. Not only did he top the rookie class, 22nd also marked a career-best effort on an intermediate oval for the former West Series regular.

Cup regulars won Friday’s race, scored 6 of the top 10 finishing positions, occupied 9 of the 43 starting positions in the field, and took home $276,743 in purse money.

* Kentucky marked the first race of the season that saw Turner Motorsports fail to put a car in the top 10 in the finishing order.
* While Kentucky Speedway finally got the Cup race they’ve been angling over a decade for, such a development is apparently not the best of news for Nationwide Series attendance. From 2004 to 2009, the crowd never fell below 70,000. Last year saw 61,000. This year it was only 52,000. Those are still solid numbers for the Nationwide Series in its current situation, but a 26% decline in only two seasons still can’t be a reassuring trend for the series. With the novelty of Kentucky Speedway now gone, expect those number to continue to slide in 2012.
* ESPN got three things right during this broadcast that I’d have never wagered they’d do on Friday night; acknowledge Eric McClure’s return to the track after suffering a concussion at Daytona a week ago, and do interviews with both Will Kimmel and Morgan Shepherd after their respective incidents. It’s a crying shame that the same courtesy wasn’t extended to Robert Richardson, and that it took wrecking their cars to generate camera time for these drivers, but seeing both the son of Frank and one of the true underdogs in the garage on TV was a welcome change.
* Sizing up this points race, there’s two problems that surface. One, race wins are obviously proving to have no impact whatsoever in this chase even though multiple series regulars have found victory lane in 2011. Two, the overwhelming lack of race wins by the drivers actually contending for the title leaves the possibility of a winless champion a very real possibility now halfway into the season. After all, such a driver is leading the standings.