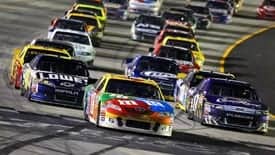 We’ll get to traffic in a little bit; I want to give our readers a few more minutes to hopefully make it home from Sparta.

Just about every column written over the past 48 hours discussing the traffic snarl-ups and logistical issues that highlighted the Kentucky Speedway’s debut Cup race has made reference to “if only the race had been better, maybe the traffic jam wouldn’t be the story we’re all writing.” I highly doubt that, but the race certainly wasn’t much to watch on paper. A 400-mile event full of green flag racing and yet without a single green flag pass for the lead does not make a compelling case for Cup racing in the Bluegrass State being much to write home about.

One would think from most TV broadcasts that no 1 1/2 mile track produces tight racing, which isn’t entirely true.

However, the race wasn’t entirely the single-file parade it’s been characterized as in the press, either. None of the races on these intermediate tracks ever are, even if there is a great deal of truth to the notion that aero push makes passing at the front next to impossible. Problem is, race fans have to be at the track in person to figure that out; otherwise, it’s a shot in the dark whether the broadcaster will actually cover where the side-by-side racing occurs, instead of putting status updates of the top 12 on a constant loop.

For all the flack the Nationwide Series telecasts rightly get for regularly omitting half of the field on any given weekend, truth be told both FOX and TNT’s Cup coverage is not short on omissions, either. Germain Racing, Front Row Motorsports, FAS Lane Racing, all of those are full-time Cup operations that seldom if ever are seen on camera or mentioned in the booth. Even on a 1.5-mile oval, with 43 cars on the track there’s seldom a time where there is absolutely no side-by-side racing going on. Problem is, unless you’re in the grandstands, all that passing and rubbing is not what’s seen minute after minute.

Just as ESPN needs to learn with its Nationwide Series broadcasts, FOX and TNT should also take note about, well, showing the whole field for once. Doing so makes for more storylines, more drama, and… more of the action that is so frequently maligned as lacking on the intermediate ovals. The racing at Kentucky never has been and never will be on par with that seen at the Martinsvilles of the series, but it can certainly be broadcast in a better light than its current form. That won’t entirely alleviate the kind of problems seen this past weekend, but it couldn’t hurt, either.

*TWO: What’s Next for Our Inaugural Winner?*

Winning at Kentucky put Kyle Busch in some elite company, along the names of Rusty Wallace, Jeff Gordon, Mark Martin and Tony Stewart as a driver that within the last 20 years has been the winner of a first-time Cup race at a new facility. Doing a brief statistical analysis, here’s some notable facts about each of those winners:

– All of the drivers to win a first-time Cup race since 1993 never finished outside the top 10 in points.

– All won multiple races over the course of the year.

– Two won 10 races during the season in question: One (Jeff Gordon) won the championship, but he did it both after winning at Fontana in 1997 and Kansas in 2001.

– Truly, by the numbers, Kyle Busch based on Sunday’s will finish either third or fourth in points this year, on the strength of a five or six-win season.

*THREE: Cashing In on Bluegrass Bedlam*

Within hours of SMI and the Kentucky Speedway putting out official word on just how bad the situation at the track was this past weekend, offering up ticket exchange options for fans unable to make it to their seats for the Quaker State 400, two other racetracks offered up specials of their own. Unsurprisingly, they’re arguably the two venues most likely to lose market share courtesy of Kentucky Speedway’s promotion to the upper tier of stock car racing.

The Indianapolis Motor Speedway announced that it would provide all Kentucky ticketholders with free admission to practice and qualifying for the Cup cars on Friday and Saturday during the Brickyard 400 weekend, as well as free parking in the facility’s $10 pay lots. The Michigan International Speedway is also offering ticket discounts to their August race for those disgruntled with their Kentucky experience.

On the one hand, there’s really no way to blame either facility for making a move to recapture market share that this new Cup race in town has grabbed. But on the other hand, how exactly is this a positive situation? Two tracks, one of which is essentially owned by NASCAR through ISC, is attempting to make a buck at the expense of Kentucky’s mishaps?

There’s no excusing the lack of preparation that was seen this past weekend, and there’s no faulting MIS and IMS doing what they can to fill the many empty seats they’ll inevitably have later this summer. But here’s the $64,000 question…if this had been an ISC track that screwed traffic up and not an SMI venue that’s had a less than stellar history with the sanctioning body, would this be allowed to stand? Or would NASCAR be putting out press release after press release calling the situation a one-time event while emphasizing the need for promoters nationwide to work together to keep the sport moving forward?

Even before the events of the past weekend transpired, Robin Pemberton was posed questions on whether additional race dates would be considered in light of the Iowa Speedway’s continuing growth. Saying no, that 36 races was as many as NASCAR would consider, was a sigh of relief; after all, with the NFL wanting more games and NASCAR needing more revenue, it wouldn’t be out of the realm of possibility to think NASCAR wouldn’t be looking at another schedule expansion.

Pemberton went further to make comments that any future reshuffling would go just as it has the past few decades, with ownership groups needing to trade dates to garner new venues for Cup races.

In short, Iowa’s got two choices should they continue to grow and expand towards being a Cup-worthy venue; somehow, someway get ISC or SMI to give them a date or sell out to another ownership group. Now, to be fair, in the case of Iowa, given the struggles of the Dover International Speedway, a date that’s not ISC or SMI affiliated could be available. But what does that say for any future venues that may emerge as worthy of a Cup race?

It says there won’t be any, unless they’re built by ISC or SMI. Who, then in their right mind would invest in building a new major league race facility, knowing both the struggles that Kentucky had to endure to get a Cup race and that there’s no way to do it outside the establishment? Plus, given the attendance woes plaguing nearly every ISC track in recent years and SMI proving anything but infallible after everything from the parking debacle this weekend to the woeful repave of Charlotte, this is perhaps the most damning testimony yet regarding the ugly future major league stock car racing is apparently facing.

*FIVE: Get used to traffic*

And no, that’s not to say that 20-mile gridlock of over 100,000 fans is going to become a norm. But Saturday night was just another episode endured by a sport that has simply grown too big to support itself. There’s no way to hang onto the sticks, the subculture, the very off-the-map attitude and reality that made the sport so intriguing for so long while at the same time attempting to bring the modernity and sterility of professional sport into the fold as well.

Just look at the Nationwide Series events at Kentucky before this Cup race sellout. No one seems to remember that after sellouts from 2004-2009, attendance for that event dropped nearly 13% a year ago and fell another 15% this year. Once the novelty wears off, chances are Kentucky’s going to be right smack in the struggle with every other venue out there.

Long story short, it may not be too many more years before stock car racing returns to the sticks, with less TV, smaller crowds and a return to venues that don’t entirely resemble coliseums. After this weekend and the outpouring of fan mail we at Frontstretch are continuing to receive regarding just how bad this snafu was, that might not be the worst thing that could happen to the sport.