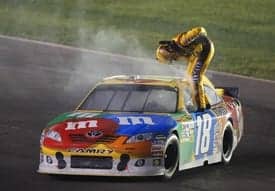 What did we learn from this weekend’s events from Kentucky Speedway? Well, first of all, if you are planning on adding over 40,000 seats to your facility, you might want to add more staff, parking spaces, supplies, etc. Somehow this seemingly obvious bit of information was lost on the higher-ups of Kentucky Speedway, who saw thousands of race fans arrive late because of parking or were turned away entirely because there was simply no more room. Not to mention reports of the track running out of food and drinks in certain concession stands _before the green flag even flew!_ To say the situation was a “clustermug” (for lack of a better word) is an understatement.

However, amidst all of the negativity that was flying around Kentucky on Saturday night, a race was still being run and points were still being earned. Whether or not you were awake for any of it, a few more dominoes fell at that 1.5-mile oval and we’re here to take a look at the drivers either on hot streaks or those who need a little help in their numbers column.

Kyle Busch’s bow is a familiar scene across all three top tier series. Could his 2011 success snare him the coveted Cup?

*Kyle Busch* – Yes, it goes without saying, but Busch is one of, if not the, hottest driver in NASCAR right now. Yes, most of his victories come in the lower-tier divisions of the Nationwide and Camping World Truck Series, but one complaint is that the Sprint Cup Series drivers are taking over the Nationwide (and to a lesser extent, the Truck) Series. So, which is it? You can’t have it both ways. Either Busch is capable of beating some of the best drivers — Cup or not — on all levels of the sport, or he isn’t.

Regardless, Busch proved again that he’s more than capable of competing with the big guns in the Cup Series as well. He came just short of pulling off the sweep across all three series last weekend, winning both the Cup and Truck races while finishing third on the Nationwide side.

It would probably be fair to mention the fact that Busch was the only Cup Series driver to compete in all three races, and coupled with his multiple starts at this track in the Truck and Nationwide Series while KMS was still screaming and filing lawsuits for a Cup date, Busch was the odds-on favorite.

After inheriting the Cup Series point lead following his victory on Saturday, now the real question is, “Can Busch compete for a championship?” If the saying, “You have to lose one to win one,” proves to be true, than the answer is indubitably, “Yes.” However, I’ve felt Busch has had the equipment and talent to contend for a championship for a few years, now. If he can just get down the mental side of it, Busch may very well be the one holding the Cup in Homestead instead of Jimmie Johnson. _My_ question is, dear readers, would Busch winning the championship be an improvement over Johnson? Who would you rather see holding the trophy?

*Elliott Sadler* – It has been so interesting to watch Sadler go from mediocrity in one series to championship material in the other over the course of an offseason. After 18 races with Richard Petty Motorsports in the Sprint Cup Series last year, Sadler’s best finish was a 17th-place showing at Infineon Raceway… and that’s as good as it ever got.

Now, through 18 races with Kevin Harvick Inc. in the Nationwide Series, Sadler has 13 top 10s, 9 top 5s, an average finish of 9th, and grabbed the points lead from Reed Sorenson following the Feed the Children 300 in Kentucky Speedway.

If stepping down a series worked so well for Sadler, I could think of a few other drivers who might want to try the same thing…

*Honorable Mention:* Brad Keselowski Racing developmental driver *Parker Kligerman* finished second to Kyle Busch in Thursday night’s Truck Series race, which is essentially just as good as a win considering the fact that Busch is nearly unstoppable in that series. Kligerman’s runner-up showing was his second in a row and fourth top 10 of the season.

*Matt Kenseth* – For some reason, no one really seems to notice Kenseth. No one really acts surprised when he wins a race every now and then, but no one notices where he finishes otherwise. Even with two victories already in 2011, Kenseth’s name hasn’t been listed under “championship contenders” as we wind ever closer to the start of the Chase, even though he has more wins than six of the current top 10 drivers in points and around the same amount of top 10s.

I have my own doubts about whether or not Kenseth will actually have something to say about the 2011 title, but the same can be said for a few other “title favorites” that have statistics less impressive than Kenseth’s.

All the same, this driver’s name should be mentioned a whole lot more than it is now. Because if Kenseth can hold on to his Chase spot (and more than likely, he will), those bonus points will be credited to him come Chicagoland, leaving the No. 17 Ford near the top of the charts. And that’s assuming two wins is the best he can do…

*Kurt Busch* – The verbal abuse from Busch to his pit crew members continued last weekend in Kentucky, complaining about slow pit stops and lack of proper car handling, but not before he led a handful of laps and looked to be an early contender for the victory. Leading 41 laps en route to a ninth-place finish, Busch ran strong early but his car faded as the sun lowered on the Kentucky horizon.

Still, Busch’s continued improvement cannot be ignored. Even with all the harsh words that flow from his mouth to the ears of his crew chief, spotter, and crew members, Busch’s ninth-place showing on Saturday was his sixth finish inside the top 11 in the last seven races, including a win in Sonoma. Heck, even his 14th-place run at Daytona was nothing to sneeze at!

However, if Busch is going to continue to improve on the racetrack, he’s going to have to boost team morale as well. His crew members aren’t going to want to continue to please a driver who gives them a tongue lashing every time the car so much as wiggles, especially since they aren’t screaming at Busch on the radio when he makes his own mistakes. So cut the crap, Kurt, and work together with your team to create a better racecar. If he can do that, a change that won’t be easy Busch could definitely compete for a second Sprint Cup Series title.

*Honorable Mention:* *Jeff Gordon* finished in the top 10 for the third week in a row, continuing the momentum gained with his win at Pocono Raceway. He gained one spot in the standings and is now seventh in points, 71 out of the lead.

*Denny Hamlin* – Winning at Michigan was supposed to be the boost Hamlin needed to return to his 2011 form, but that hasn’t happened. In the three races following his victory, Hamlin’s best finish was 11th last weekend in Kentucky. A 37th in Sonoma and 13th at Daytona essentially wiped out all of the points Hamlin earned in Michigan, though he was able to solidify the 10th position in points following the Kentucky event.

In Hamlin’s defense, the No. 11 Toyota was running lap times similar to those of the leaders during the day, but, like Kurt Busch, his car’s handling went south as the sun went down. Had Hamlin been able to maintain the speed he showed early on, he may have challenged his Joe Gibbs Racing teammate Kyle Busch for the victory. Considering that Brad Keselowski was dominant as well, Hamlin, Busch, and Keselowski could have been battling for the lead and who knows what could have happened then!

Instead, Hamlin finished a ho-hum 11th and Busch dominated the race. Same ol’ same ol’ in 2011…

*Tony Stewart* – Owner/driver of Stewart-Haas Racing, Tony Stewart has failed to follow up the success enjoyed by the team in their first two years of existence. Though Stewart is known as more of a summertime driver, we’re almost halfway through July (yes, already!) and Stewart sits outside the top 10 in points without a win. This time last season, Stewart had already made his way into Victory Lane and had eight top 10s to his credit. Stewart has six at the moment.

In fairness, Stewart was only a couple of spots higher in the points than he is this year, sitting 11th at the moment and ninth after 18 races in 2010.

Though Stewart is within reach of the Chase at the moment, even if he is able to steal a spot before Richmond is over and done it’s doubtful he’ll be much of a contender. If he doesn’t pick up the pace, he may not get a chance. With drivers like Denny Hamlin, Clint Bowyer, and Dale Earnhardt, Jr. trying either to maintain or regain a Chase spot, Stewart looks to be the odd dog out at the time being.

*Honorable Mention:* Red Bull Racing driver *Kasey Kahne* is struggling in his lone year with the team before he jumps ship to Hendrick Motorsports in 2012. Aside from a fourth-place run in Daytona, Kahne hasn’t finished inside of the top 10 in seven of the last eight races. He was 13th in Kentucky and gained two spots in the points to 17th, 45 points out of the top 10.

*Greg Biffle* – Roush Fenway Racing finally had enough of watching a driver of Biffle’s caliber running mid-pack while his teammates Matt Kenseth and Carl Edwards are contending for victories almost weekly. On Monday, the team announced that Greg Erwin was out as crew chief and Matt Puccia, Paul Menard’s Nationwide Series crew chief in 2010, was in, effective immediately.

The change was a long time coming. In the last five races alone, Biffle has finished no better than 15th, and with each mediocre finish, his Chase chances get dimmer and dimmer and dimmer, as he now sits 14th in points, 33 points out of the top 10 with eight races left before the field is set.

However, Biffle and RFR had better pray Puccia brings the kind of chemistry and team leadership that they need. Puccia has never been a crew chief in the Cup Series, and asking him to come and save this race team before they undo themselves is a ton of pressure. It’s a move that needed to be made, but I’ll be shocked if it actually works out in Biffle’s favor.

*Mark Martin* – A pole at Daytona last week was the only real high point of the season, but Mark Martin’s final season with Hendrick Motorsports is turning out to be a real stinker. Martin’s five top 10s this year have been spotty, with his most recent top-10 run coming in Michigan a few weeks back.

Martin’s average finish this season is 17th, and the only time anyone notices him anymore is when he’s caught up in someone else’s mess or endures a run of bad luck. Not exactly the best way to say goodbye as you take the next step in your career.

*Honorable Mention:* *Bobby Labonte* has only one top-10 finish all season, and hasn’t finished inside the top 20 since finishing 18th at Dover back in May.