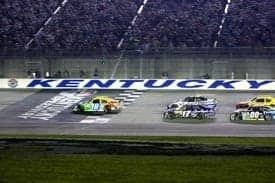 A majority of the articles focused on NASCAR this week will deal with the traffic situation prior to and after Kentucky’s inaugural Cup event and well they should. It was an unmitigated disaster of epic proportions. I wrote about it in my race recap at length and doubtless other Frontrstretch staffers will take up the topic this week. (I’m writing this Sunday night…it’ll be a few days before you see it.) We are after all a fan based Web site rather than a corporate based or sponsor based website like so many others. If it’s a bad deal for the fans that’s what we cover.

Without belaboring the point, Saturday night was a pure disaster. But let me say this. For all the feeble apologies offered by track management, NASCAR, and even some drivers if you didn’t see this coming, I advise you to have a passenger in your car check both ways before entering a railroad crossing. You’re just as likely to miss the Great Northern out of Cheyenne (from sea to shining sea) bearing down on you. If you nearly double seating capacity and have no plan in place to accommodate all those additional guests well to be frank, you’re retarded. I feel genuinely bad for those reputed 20,000 fans who endured the hours of traffic only to be turned away at the gate. But what nobody else seems willing to say is I think you were played like pawns and nickel dockside hookers. Track owner Bruton Smith had the Governor of Kentucky there as a guest. He got to see the logistical nightmare. Now that you’ve suffered Smith gets to strong arm the Governor into making and paying for highway improvements for an event that pumps a lot into the local economy.

The Governor’s inbox is going to be filled Monday morning with notes from angry constituents who endured this mess. Think Smith doesn’t know how to play politics? Look at the government largesse he received when he threatened to move the Charlotte Motor Speedway. He got a four lane highway built outside his Atlanta track to help move fans in and out of the track on the “gummint” dime then took a race date from the track anyway. If you were one of those 20,000 fans who paid for a ticket but missed the race, I’m sorry you missed it, but you didn’t miss much. And I’m not surprised you missed it either in light of stats made public by Kentucky Monday. The state says there are parking spaces for 33,000 cars at the track. For 106,000 fans? Way too few I’d say.

The inaugural Sprint Cup race at Kentucky was supposed to be a celebration, but instead became an embarrassment on and off the track.

It was a huge embarrassment for NASCAR. They finally got the national news wire coverage they crave but it was only to say that the traffic mess was a bigger story than who won the race. That’s not a powerful incentive to go to a race to fans who are still on the fence about attending a race live.

In a sad way the traffic stories are almost a blessing for track management and NASCAR in general. Had it not been for the traffic the big NASCAR story of the night would have been “the racing sucked.” Even when I started writing about this sport “sucks” was an off limit term. So for those of you with more delicate sensibilities let me offer some alternatives. “The racing”: bit the big one, was less than compelling, stinked, stank and stunk, was rather mundane, was perhaps less than expected, stunk to high heavens, sucked eggs, and was completely and unrevealingly without social value or interest.

I’ve been following racing for over four decades and I realize that not every race is going to be a classic. I recall the days when either Richard Petty or David Pearson would win every big track event. I was watching back when Cale Yarborough used to routinely lap the field in his Junior Johnson prepared Chevy on his way to victory and another title. I have watched Dale Earnhardt, Jeff Gordon and others win three and four races in a row. I was there in the stands chowing down on my lukewarm KFC back when Bill Elliott seemed destined to win every race on a track a mile or more in length. But seldom have I seen a race so totally and utterly devoid of interest as Saturday night’s mess at Kentucky. At least in those old blowouts there’d be a portion of the race, maybe at the beginning, maybe at the midpoint where two drivers actually seemed to be racing for the lead. In those days mechanical misfortunes or a wreck for one driver sometimes handed the win to his closest competitor. The Cup drivers raced each other all day. They didn’t cruise for points contentedly riding ten car lengths behind the guy in front of them. When things went badly they displayed genuine emotion not a pushing and shoving match worthy of two three year old girls bickering over whose teddy bear got the last cup of tea at the party.

“A bad race” is a subjective thing. Obviously if you are a Kyle Busch fan (have you tried Prozac?) and somehow made it to the track on Saturday night you were thrilled with the result. I am often asked how I define “a bad race.” I have been accused of liking some tracks and hating others and letting my opinion of the facility bias my opinion. What’s a bad race? I’ll have to defer to Supreme Court Justice Potter Stewart. It’s like pornography. I know it when I see it.

One of the keys I look at is the intervals between drivers. When it gets to be a ten second gap between the leader and the tenth place driver it’s a bad race. In fact its become a processional parade that doesn’t deserve being called a “race” anymore. When the only lead changes going on during a fifty lap segment are caused by the former leader ducking into the pits for a stop, well that’s a bad race. It may seem counterintuitive but the races with the most lead changes tend to be the most sedate ones. During long green flag stretchs of racing one after another the leaders must pit. The new leader in turn pits handing the front spot to another driver, and that driver to another after him. Don’t let NASCAR and the networks dazzle you with statistics. A real lead change occurs when the driver in second stalks, runs down and passes the fellow ahead of him through strength or cunning, even while the leader does his best to keep his competitor behind him. We don’t see much of that anymore.

Sadly, Kentucky is unlikely to ever produce a truly classic race. It’s just another 1.5-mile race track with too little banking for stock car racing. Hey they’re only eight of them currently polluting the schedule. Track owner Bruton Smith says he’d like to reconfigure Kentucky to make it more like Texas especially in the corners. I’m sorry…no sale. Texas has hosted a few good races,m but the track’s ratio of clinkers to classics remains unacceptably high.

You can’t blame the track completely for a boring race. Such is the nature of NASCAR racing under the new points system. Why would second place Jimmie Johnson make an all out effort to win the race (or even keep then third place David Reutimann at bay) in the final two laps. Johnson is one of the anointed ones, the top six in points all of whom are virtually locked in place for the Chase. Johnson knows he’s not going to be battling Reutimann for a Chase slot. A conservative strategy shall prevail until the kickoff of those ten races that really matter at the end of the year. Meanwhile it’s worth experimenting with the car to be ready for the final ten races even at the possible expense of a bad afternoon. Thank you Brian France for reducing the middle section of the season to near meaninglessness.

There are other factors at play as well that are diluting Cup racing to the point of no relevance. Goodyear has taken a well deserved shellacking over the years for providing tires that failed at race tracks sometimes in spectacular fashion as witnessed that one awful Brickyard 400 in 2008. “Fall off” with the tires (the difference between the speeds of drivers with four fresh tires as opposed to the ones on older tires) has become a non-issue too many weekends. It used to be four new tires were worth seconds per lap. A driver and team that were eight seconds behind the leader (as was the case with Kyle Busch and the field last Saturday night) would short pit and try make up the advantage before the leader pitted even knowing an untimely caution could doom the strategy or at the end of the race the faster fellow might have the better rubber and a decided advantage. That actually made things interesting in a way a fuel mileage contest never will be.

Then there’s our old friend “aero push” which has ruined racing since the mid 1990s. Even a driver in a faster car with fresher tires is at the mercy of the drivers ahead of him with track position. Sure the faster driver can get up to a few yards of the bumper of the driver he is trying to pass, but at that point he loses the air off the nose of race car and the resultant front down force that allows him to steer into the corners. That was clearly evident on Saturday night when Kyle Busch in a clearly superior car could run down Brad Keselowski (who elected not to pit) but couldn’t get by him. When “clean air” and “track position” triumph over a more powerful, better handling car with a better driver, well, Houston, we have a problem. Maybe the new car design in 2013 will fix that issue. And maybe Britney Spears will win a Nobel Peace prize for Literature that same year. I’m not betting the rent money on either happenstance.

So there you have it. A track nobody can get to featuring the sort of racing nobody wants to see anyway. The perfect storm. But if that’s a sound business model I really don’t see it.