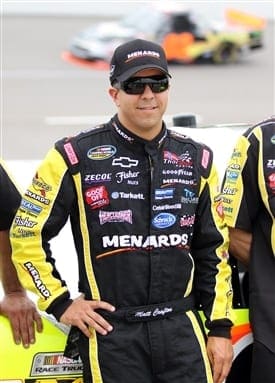 *In a Nutshell:* Matt Crafton took the checkered flag 0.337 seconds ahead of Austin Dillon to win the Coca-Cola 200 presented by Hy-Vee Saturday night at Iowa Speedway. After restarting fourth following the final caution of the night, Crafton spent just seven laps heading to the front and never looked back despite a tense side-by-side battle for the lead just inside ten laps to go. Polesitter David Mayhew, Johnny Sauter and rookie Joey Coulter rounded out the top 5.

*Who Should Have Won:* *Austin Dillon* For the second consecutive Truck Series visit to Iowa Speedway, Austin Dillon had a fast machine underneath him. Though he started fifth, Dillon wasted little time heading the front, taking the lead from Johnny Sauter by lap 30. At points throughout the race, Dillon held as much as a three-second lead and looked to be on his way to another victory at Iowa, but a late-race four tire pit stop left the driver of the No. 3 Bass Pro Shops / Tracker Boats Chevrolet mired in eighth. Though he worked his way to the runner-up position, he just didn’t have enough to make the pass on Crafton for the victory.

*1. Why does Iowa Speedway have any walls that don’t have SAFER Barriers?*

Every time a driver hits a wall that isn’t equipped with a SAFER Barrier, the same topic arises, and yet there are still unprotected walls out there that can seriously injure a driver. Just ask Justin Marks, who hit the outside wall of pit road head on in a “scary lap 103 crash”:http://www.youtube.com/watch?v=7JTHGVTujuo that damaged the wall and resulted in a red flag for track officials to make the necessary repairs.

Though he was awake and alert, Marks was transported to a local hospital for tests and further observation, and in the late stages of the race, his wife Erin sent out an update on her “Twitter feed”:http://twitter.com/#!/erinmarks66 saying “We’re in the hospital for some tests, but all good.”

On Sunday, Marks posted an update on his “Twitter feed”:http://twitter.com/#!/justinmarks66.

“Thanks again for the tweets this morning everyone!! Doing fine just a bit sore, it’s all part of it… Gonna chill by the pool today…”

He continued on to say he and Max Papis, who was right behind Marks when he spun across the track, had spoken and they’re just fine.

“Spoke to “@maxpapis”http://twitter.com/#!/maxpapis today. We’re all good, just a tough day at the track for both our teams. He owes me a home-cooked Italian dinner though ”

Though the commentators on SPEED spent some time attempting to decipher whether Marks got loose and was hit by Max Papis to trigger the wreck, it doesn’t really matter. In fact, the important thing Iowa Speedway should take away from this is a need for more SAFER barriers around the track. There is absolutely no reason for any track on the NASCAR circuit to have exposed walls that could cause serious injuries to a driver

Thankfully, Marks’ head-on collision with the solid wall outside pit road only resulted in a heavily-damaged truck and a trip to the hospital rather than something much worse.

Matt Crafton had a reason to smile on Saturday after taking home the victory in Iowa. Photo by Kyle Ocker

*2. How did Dakoda Armstrong fare in his Truck Series debut?*

After signing with ThorSport Racing back in March, Dakoda Armstrong finally made his debut behind the wheel of the No. 98 Saturday night. After starting 25th, Armstrong ran just outside the top 20 for much of the early stages of the race. After going a lap down, the 20-year-old received the lucky dog under the fourth caution, but it still wasn’t meant to be for the debuting driver.

Armstrong managed to damage the front end of his No. 98 Chevrolet when Justin Marks and Max Papis got together, and though the team initially thought there was just minor damage, Armstrong was left to battle a very loose truck for the remainder of the race. He went a lap down once again and finished 21st.

“I was really getting a better feel of things and was getting into a good rhythm right before the contact just past halfway,” Armstrong said after the race. “The damage really killed the nose and made it so loose I had to just try and keep it in one piece. I’m proud of all of the guys on this ThorSport team and the gains we made all weekend to our Ferrellgas / Agrisure Chevy Silverado.”

Though it wasn’t the top-10 finish he was hoping for, Armstrong should be quite satisfied that he managed to stay out of trouble–for the most part–and score some much needed time to familiarize himself behind the wheel of his truck. He’ll have at least five more races this season, including his next start at Lucas Oil Raceway in two weeks, behind the wheel of the No. 98 to show he belongs right where he is–and I’m confident the extra track time will only allow him to improve as he gains more experience.

A solid fourth-place finish allowed Johnny Sauter to maintain the points lead by 22 over Austin Dillon, who moved up a spot. Rookie Cole Whitt dropped a spot to third after finishing sixth Saturday night. James Buescher remains fourth while Matt Crafton jumped three spots with his victory to round out the top 5.

Timothy Peters moved up one position to sixth, surpassing series veteran Ron Hornaday, Jr. who dropped to seventh. Parker Kligerman dropped three spots to eighth after a 22nd-place finish. Rookie Joey Coulter and Brendan Gaughan round out the top 10.

“This win was exactly what we needed. This means so much to me, the team and all the sponsors that support us. This is really a huge momentum-builder for the team. In the last four weeks, anything that could have gone wrong did, and now here we are in victory lane. Our truck was really loose at the beginning, but once it came to me, we only needed minor air pressure adjustments for the rest of the night.” _Matt Crafton_

“We were fastest all night, but they [Crafton’s team] just made the right call in the end. It was good for the points tonight, but we’ve just been giving the wins away here in the end. It hurts when you do that.” _Runner-up Austin Dillon_

*Up Next:*
The Camping World Truck Series heads to Nashville Superspeedway for the Lucas Deep Clean 200 Friday night. Last season, Todd Bodine overcame an early flat tire and took the victory by more than four seconds over Austin Dillon. Coverage begins at 8:00 PM EDT on SPEED; the race can also be heard on your “local MRN affiliate.”:http://www.racingone.com/stations.aspx