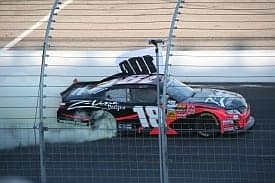 When we next return to New Hampshire Motor Speedway in late September it will be for the second race of the 2011 Chase. And if you thought tempers were frayed and fenders busted and bruised this past weekend, just wait until the next time the Sprint Cup drivers take to the one mile flat track in the Granite State when the stakes will be even higher: especially those with a shot at dethroning the five-time champion, Double J. Speaking of the No. 48 team, Johnson certainly had another one of those golden horseshoe type weekends – seemingly out to lunch for much of the race before finally finishing fifth. Which just served as another warning, if any were needed, that he remains the man to beat – no question. One driver that just might unseat juggernaut Jimmie is the marginally less irascible Kyle Busch, which is where we’ll start this week’s edition of Five Points to Ponder…

Kyle Busch notched his 100th Victory in the Top 3 Series of NASCAR…a worthy accolade no matter who you are. _Image by RJ Grady_

Kyle Busch’s Nationwide victory gave him a total of 100 wins across the three top echelons of NASCAR. Those victories break down as follows: 22 Cup, 49 Nationwide and 29 Trucks with Saturday afternoon’s victory tying the all-time Nationwide Series record with Mark Martin. In a typically classy gesture, Mark Martin came to Victory Lane to congratulate a driver who is half his age — such longevity is to be celebrated in the cut throat world of top level NASCAR. Now I’ve seen plenty of dissenting, churlish voices wanting to play down and lessen Busch’s efforts, so it’s instructive to compare and contrast his efforts with some of his rivals.

Martin, for the record, has 96 total wins (40 Cup, 49 Nationwide, 7 trucks), Carl Edwards has 58 (19 Cup, 33 Nationwide, 6 Trucks) and Kevin Harvick has 63 total (17 Cup, 37 Nationwide and 9 Truck). Now you could argue that Busch has padded his total with his Truck victories, but to me the 100 is an achievement that is to be lauded. It’s hard enough to win one race (just ask Michael Waltrip) so to have won so many races and still be just 26 years of age is, in my eyes, absolutely incredible.

*SHR Heating Up at Just the Right Time*

Speaking of victories, a big shout out to Ryan Newman who broke a long winless streak finishing ahead of his team-mate and boss for Stewart-Haas Racing’s first ever 1-2 finish in their two and a half years of operations. With the two SHR racers starting ahead of the pack, it really was a tremendous day for what is still a fledgling organization – albeit supported by engines and chassis’ from the best in the business – Hendrick Motorsports. For Newman in particular, the win was very much an insurance policy for his Chase berth – not to mention his first in the Army car.

In short, it was just what the doctor ordered for all concerned at Stewart-Haas racing, a fact Smoke was quick to note post race, “It was a perfect day for the organization for sure. This is a perfect way to go into an off weekend, for sure. Especially going into Indy, man, this is big for everybody at Stewart-Haas Racing.”

*A Long Overdue Week Off*

It’s a rare off weekend on the Sprint Cup schedule, but if you can’t live without cars turning left at great speed with reckless abandon, you can still catch both the Nationwide and Truck Series action from Nashville, so all is not lost. For the Cup drivers, though, this is the last free pass weekend before we hit the final stretch of 17 straight weeks of racing all the way through to Homestead-Miami and the crowning of the 2011 Sprint Cup champion.

As Harvick, another presumptive championship challenger, commented on the ubiquitous NASCAR form of communication — Twitter — post race, “I don’t even need to say anything…looking forward to a week off to regroup and take a break from the world…”

I’d suggest he makes the most of it, because if he wants to knock Jimmie J off the top of the ladder, he’ll need every ounce of effort to do it before heading to the Brickyard.

*How Many Will Show Up at Indy?*

There may be a few folks involved with ticketing at Indianapolis Motor Speedway who have some sleepless nights these next couple weeks. Attendance has seen a precipitous decline, particularly these past three years after the tire fiasco in 2008 when NASCAR was forced to throw a caution every ten or so laps. The numbers make depressing reading: In 2007, 270,000 fans attended, 2008:240,000; 2009:180,000, while last year saw just 140,000 enter arguably the most famous track in all of motorsports. In many ways it’s a great shame, but it’s indicative of how processional the racing has become at the Brickyard despite the efforts being made to vastly slash ticket prices. One thing is for sure, the crowd is going to look pretty dam sparse and I can’t say I blame fans for choosing other ways to spend the weekend.

*The Return of the Worldwide Leader in Sports*

And finally next week, the Brickyard 400 will mark the return of ESPN the self-styled worldwide leader in sports after a six race stretch with TNT. While there are those who will carp on about the errors made by the TNT team this past month and a half, I always very much enjoy the interlude between the bombastic broadcasting monoliths of FOX and ESPN. The wide open coverage at Daytona, Race Buddy and a desire to report on the stories that occur on track (and not the ones decided in the pre-race production meetings) are just a few examples of why I think TNT broadcasts NASCAR better than anyone else. Still, at least we get the dulcet tones of Dale Jarrett to smooth over the rough edges. Eh. Can’t say I’m stoked, but I’ll still be watching.