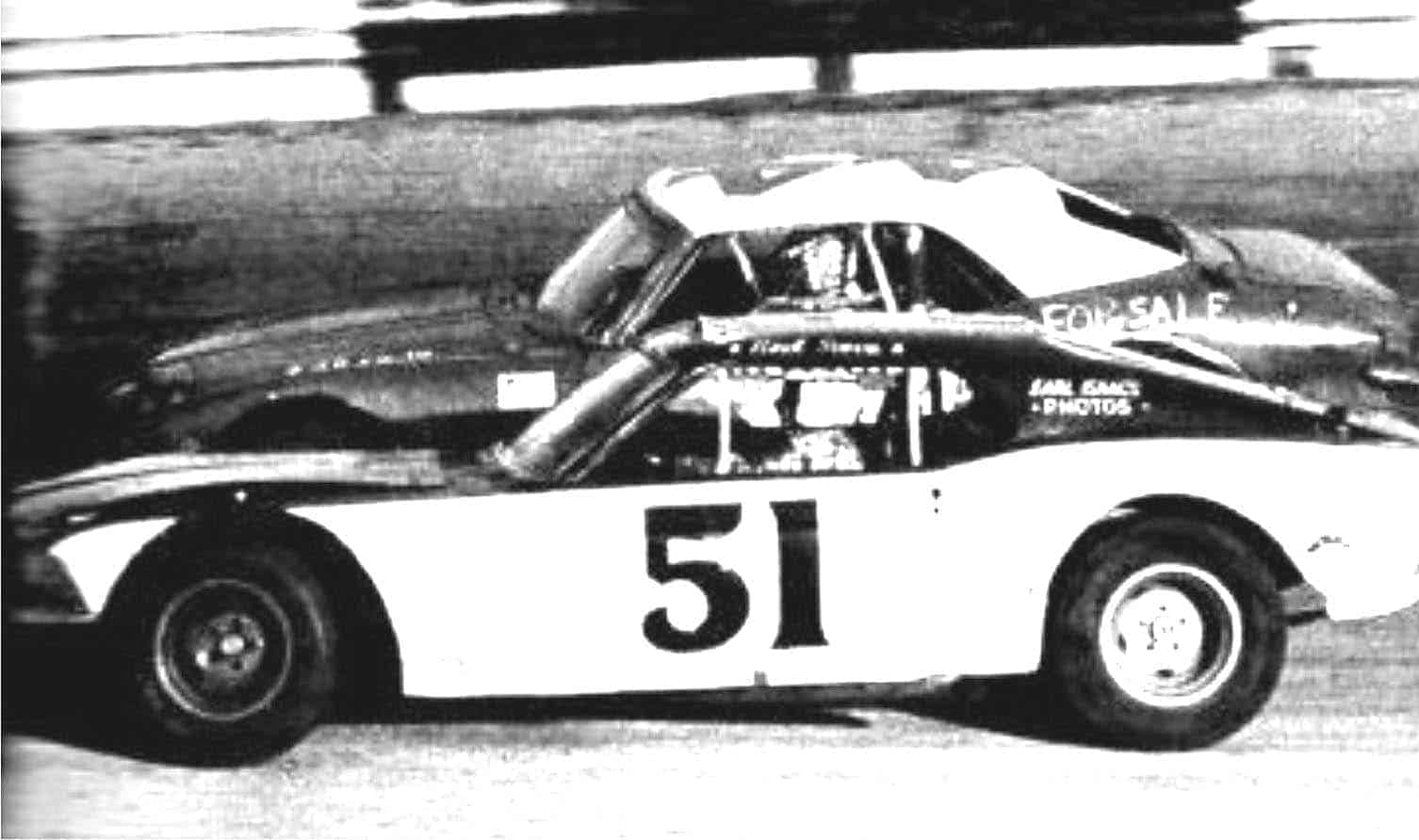 Chris Burdo of Norwich, Conn., who jogged my memory about a “WTH” moment at Salem, adds a second question…

Neal Sceva and Joe Ruttman fight it out, side-by-side at Salem in 1974 en route to a wild finish.

*Being in the flagstand, what was the strangest win that you’ve ever witnessed?*

I’ve plowed this ground before, but with the indulgence of the editors, I’ll do it again. And this time we have a photo taken by P.J. Brizzolare that has surfaced since the first time I told this tale.

It took place in October of 1974. Joe Ruttman was leading the final 100-lap segment of the ASA Midwest 300 at Salem, but an Ohio driver named Neal Sceva was giving him all kinds of reasons to worry in the final laps. Sceva was trying inside, outside, any way he could think of, but Ruttman was driving the world’s widest Camaro.

Finally, after the white flag things really got interesting.

Sceva made a dive to the inside coming off the second turn of that high-banked half mile, and this time got all the way alongside Ruttman. Neal suddenly found himself running on the grass inside the backstretch and there was no doubt he was “forced” down there.

Either because he couldn’t get any traction on the lawn or decided discretion was the better part of valor, Sceva backed off and fell in behind Ruttman again. Going through the third and fourth turns, he tried again, this time getting up as far as Ruttman’s driver-side window by the time they went under the old overhead bridge at the head of the straightaway, and then ahead by inches as the photo shows. At that point, Joe appeared to try to force him down again – but this time there was a guard rail in the way.

Discretion be damned, I suppose, Neal lost some ground but kept coming and the result was Ruttman’s car going across the start-finish line sideways with the front end of Sceva’s Mustang planted firmly in the left side.

Cars were diving in all directions to miss the melee, and that was one of my first experiences with waving two flags at once. Not two checkers this time, but the checker and yellow. Somehow I even found a way to flip on the yellow light.

When it was all over, there was a huddle of ASA officials in the tower to decide what kind of call to make. Somebody asked my opinion, and I suggested we award the win to Ruttman and then fine him the amount it paid for first place. That wasn’t taken too seriously, but I had a feeling that John Marcum or Big Bill France might have done just that.

As it turned out, they decided to declare Sceva the winner and penalized Ruttman for rough driving.

When ASA Competition Director Milt Hartlauf tried to explain to Ruttman why the ruling was made, Joe said, “Hell, what else was I supposed to do? I gave him the whole outside!” The fact that he waited until Sceva was all the way on the inside to give him the outside somehow didn’t enter into Joe’s thinking.

This eventually ended up with Joe Ruttman filing a lawsuit, but I never heard anymore about that. Could be that the lawyer involved knew me from my days as a newspaper editor in Salem and realized I wasn’t going to be much help even though Joe and I were good friends.

Years later, I ran into Joe when he was heading up hospitality for Dan Gurney’s teams during an IMSA race at Atlanta, and he recalled the day and asked me what I thought.

“Joe, I thought you were wrong.”