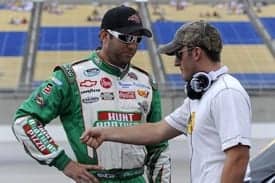 They don’t call him Concrete Carl for nothing. Carl Edwards rebounded from a mid-race pit road speeding penalty to score his fifth win of the 2011 Nationwide Series season. Aside from the penalty, it was a flawless night for Edwards, who led 124 of the laps run and was largely unmolested up front after Brad Keselowski dropped a cylinder. Ricky Stenhouse, Jr., Friday night’s Truck winner Austin Dillon, Justin Allgaier and Aric Almirola rounded out the top 5.

Extreme hot temperatures in the Nashville area throughout the weekend led to a very slick concrete racing surface, causing loose conditions that dominated the field on Saturday evening. Still, despite the treacherous track environment, the event was clean; only three yellows slowed the 300 miles on Saturday, with Mikey Kile’s spin through the backstretch grass the only incident of the night.

Incoming points leader Elliott Sadler was a strong top-5 contender throughout the race before breaking an axle leaving pit road during the event’s final caution. With the No. 2’s night left in shreds, Reed Sorenson surged back into the points lead after recovering from an earlier battery problem to score a top 10. Stenhouse’s runner-up result left three drivers within 15 markers of the top spot as the Nationwide Series heads to Indianapolis – perhaps their final event ever at Lucas Oil Speedway’s short-track venue.

*Roush Fenway Racing’s* Nationwide regulars had plenty to smile about even without taking credit for their Cup teammate’s victory. *Ricky Stenhouse Jr.* finished second and gained considerable ground in the title chase after a run that saw the No. 6 car catching Edwards in the final laps. *Trevor Bayne* and the No. 16 team never got quite the handle on Nashville that their teammates did, but Bayne did manage to secure a top 10 after fighting a skating condition earlier in the race and nearly spinning out in turn 4 while racing in traffic. Saturday marked the first time in five races that both Ricky and Trevor scored top-10 finishes the same weekend.

*Austin Dillon* may not have won Saturday, but he was the undisputed king of Nashville this weekend. Dillon followed up his Truck Series win Friday with a stellar performance in KHI’s No. 33 car, leading nine laps (his first in NNS competition) and finishing a career-best third, the third consecutive top-5 result for the team. Though Dillon had his lunch stolen on the race’s final restart on lap 184 (Edwards and Stenhouse steamrolled past for the lead), there was really no other instance that the RCR prospect looked like a driver making only his 10th career start. Results like this one suggest that Dillon will be more than ready to tackle this series full-time in 2012.

*Sam Hornish, Jr.* is another driver that may well be seen on the Nationwide circuit full-time in 2012, and apparently he’s just as ready to make noise. Hornish was a fixture in the top 10 after qualifying there, proving able to stay on top of a temperature-sensitive track even after having only limited seat time in 2011 and having not raced on the Nashville Superspeedway since 2007. Hornish’s Cup results may well have been lacking, but the former IndyCar standout obviously learned something, because he’s proven to be a stout contender in his limited Nationwide activity this season.

*Justin Allgaier* finished fourth and carried the flag for Turner Motorsports in a performance that he desperately needed, rebounding from earlier handling woes on a day that he carried a special Dollar General paint scheme; good thing, seeing as how the company CEO was at the track.

*Elliott Sadler* came in leading in the points, and for 180 laps was looking fully capable of both maintaining and extending that lead. But a broken axle leaving pit road during the final cycle of pit stops left the No. 2 with a 30th-place result that was their worst since the season opener at Daytona. Reed Sorenson’s resurgent charge back through the pack after having a battery fail and Stenhouse’s strong run left Sadler 14 markers out of the lead heading to Lucas Oil Raceway.

*Josh Wise* finished 20th driving the No. 7 car, way off the mark on a night that Aric Almirola posted a solid top-5 result and in the midst of a recent upswing in performance for JR Motorsports. With Kasey Kahne taking seat time in the team’s cars and now both Jimmie Johnson and Jamie McMurray getting in on the action, seat time in the No. 7 is starting to become less and less available. That, coupled with Danica Patrick coming to the series full-time in 2012 means that this driver’s opportunities to make an impression and land a long-term ride are diminishing. Sorry, Josh, but 20th-place results aren’t going to get that done.

*Key Motorsports* and its fleet of start-and-park cars had a rough weekend. First, *Brett Rowe* failed to qualify the No. 46 car. *Charles Lewandoski* and *Tim Andrews* both ended their evenings by lap 8, leaving the team’s flagship No. 40 to *Chase Miller*. A long-time start-and-parker himself, Miller was getting a chance to run the distance in his first race since Homestead back in 2008. But that chance ended 51 laps short of the finish, though, as his Chevrolet suffered a clutch failure which sent him to the sidelines. In the end, the car was tabbed with 31st place, still Miller’s best in Nationwide competition since that Homestead event years ago.

Speaking of start-and-parks, take a look at the back of the field this Saturday. *11 of the 43 cars that took the green flag Saturday evening were parked by lap 54*, none of them for incidents on the track. Do the math: that’s 25.6% of the field.

*Underdog Performer of the Race: Mikey Kile.* Turner Motorsports certainly isn’t an underdog organization, but Kile is trying to do driver development the most difficult way possible in 2011; a handful of starts erratically throughout the season in a car that’s already driver-by-committee. The 15th-place result this Saturday was Kile’s career-best, a substantial improvement over the 29th-place finish he posted at the same track in the same car earlier in the season, and an example of recovery; Kile got dumped by Brian Scott on the backstretch on lap 128 and had to maneuver his car through the grass to keep it off the wall. Kile also proved a factor in a fierce four-wide battle during the closing laps for the final Lucky Dog slot with Jason Leffler, Michael Annett and Scott.

Cup regulars won Saturday’s race, scored 1 of the top-10 finishing positions, occupied 2 of the 43 positions in the field, and took home $58,050 in purse money.

*David Stremme*, *Derrike Cope*, *Danny Efland*, *Jeremy Clements*, *Chase Miller*, *Blake Koch*, *Kevin Lepage* and *Morgan Shepherd* all ran or attempted to run the distance Saturday night and were mentioned in no capacity during ESPN’s broadcast. In addition, *Michael Annett*, *Mike Bliss* and *Timmy Hill* were mentioned as only lap traffic with no camera time, *Mike Wallace* was shown on pit road with no update given as to his car’s handling, *Eric McClure’s* car was only seen during one-time use of the pit crew member camera, *Scott Wimmer* was mentioned as a Lucky Dog with no camera time and *Jennifer Jo Cobb* was only mentioned as being the race’s biggest mover with no camera time. That equals out to 15 of the 30 drivers that ran the distance and weren’t Cup regulars, or 50% of the Nationwide field being exempted from the coverage.

* That being said about ESPN’s coverage, this broadcast was their best of the season. The 15 Nationwide regulars that were featured were featured in-depth, with multiple updates throughout the race as to how their evening was going. ESPN did well to show side-by-side racing throughout the field, as well as progressing back in the pack when there was nothing going on up front. Had this been a telecast of the top 20 and nothing more, this would have been sportscasting at its finest. Start involving the middle and back of the pack (as SPEED did an excellent job with in their ARCA coverage at Iowa a week ago), and ESPN may well be on to something. Couple that with the awesome racing that Lucas Oil Raceway puts on every year and, well, there’s a real reason to tune in this Saturday night.

* Steve Wallace got plenty of air time this weekend, Michael Annett got hardly any. Have a feeling a certain someone in the booth may have pulled a few strings to keep the same driver that pled guilty to a DUI earlier this week from getting any attention called to him?

* Speaking of that certain someone, Rusty Wallace is well known to have a big mouth… just ask Ryan Newman why he was willing to be such a hostile teammate during their time together at Penske Racing. That being said, Wallace still has ties in the Penske camp. The point? Wallace was adamant he expected Hornish to race Nationwide full-time next year, with Alliance Truck Parts as at least part of the deal. Chances are more than good Wallace wasn’t just mouthing; he was prematurely releasing information he shouldn’t. Same way he did as a Cup driver in the garage.

* Key Motorsports has resorted to fielding a fleet of start-and-parks to stay alive after nearly falling off the circuit, but a new team in the garage is now on life support. R3 Motorsports, a week after announcing a partnership with Jay Robinson Racing to field the No. 23 car, showed up with two cars at Nashville and had both of them parked by lap 28. Considering both how long the team has gone without sponsor decals and how many cars they’ve torn up in 2011, it’s hard to be surprised by this development. But it doesn’t bode well for a field that’s 25% start-and-park, either.