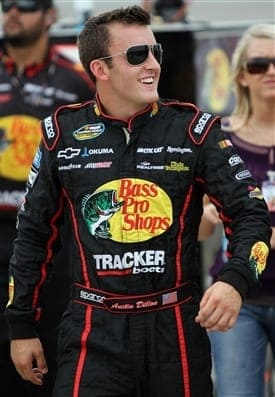 There is something to be said about a man who refers to his significant other as “my smokin’ hot wife” in a public prayer before thousands of spectators and millions of viewers. After all, doesn’t every woman dream of having a man who adores her enough to refer to her as “smokin’ hot” in front of millions of people, creating a media frenzy where her name will be played over and over, on news and sports broadcasts all over the country?

No? Just me? Alrighty then…

Aside from the highly entertaining pre-race invocation given by none other than Pastor Joe Nelms, the Nationwide Series race ended in rather predictable fashion with Carl Edwards taking the checkered flag. Austin Dillon’s win the previous night, in the Truck Series prefaced a weekend of predictable winners and generally uneventful racing. But I’m sure it was because of a lack of more Cup drivers, right?

OK, enough joking around; let’s get down to business. After some number crunching, results checking, and a smoking calculator following the Cup Series off week, here are a few drivers from the two lower series who have momentum on their side … and those who need some of their own.

Austin Dillon enjoyed himself at Nashville, winning the race and executing a flawless face plant.

*Austin Dillon* – The grandson of Richard Childress finally found his mojo on Friday night, winning the Camping World Truck Series race in dominating fashion. Dillon led 56 of the 150 laps to pull into Victory Lane one week removed from a heartbreaking loss following a botched pit stop in Iowa.

A few races ago, though, things weren’t looking up for Dillon, who only had 4 top 10s in 10 races and led laps in only three of them. It seemed as though Dillon had been bitten by the infamous sophomore slump until that Iowa event, when someone seemingly flipped a switch. Even after leading 46 laps at Texas and 4 at Kentucky, the finishes didn’t show his strength and Dillon became little more than an afterthought.

Now, he’s hard after Johnny Sauter for the championship, having more fun while doing it than perhaps any other Truck Series driver on the circuit. Dillon made a point of celebrating the victory, too. After climbing out of this truck at the start/finish line to wave to the crowd and grab the checkered flag, Dillon attempted to slide through the painted portion of the infield grass on his belly.

The key word there is “attempted;” Dillon slid a whole half-an-inch before the momentum threw his lower body forward. Any faster, and he may have just done a full somersault! This won’t be the last time we see Dillon in Victory Lane this season, but he may want to choose a new celebration…

*Johnny Sauter* – Following a run of two finishes outside the top 20—his only two such finishes this season—Sauter got back on his feet in Iowa and Nashville and somehow maintained the points lead through it all. I guess a good start to the season will do that for you.

Sauter has held the top spot for most of the season, snagging it for the first time after his win at Martinsville, losing it two weeks later in Dover, and regaining it with a runner-up finish in Kansas. He has held it ever since and now maintains an 18-point lead over Austin Dillon, a pretty significant margin with NASCAR’s new points system.

I can’t say Sauter was a pre-season favorite of mine to win the championship, but I think it is safe to say he is now the midseason favorite. Right now, the only driver that looks capable of challenging him is Dillon, and he’ll have to rely on Sauter making a mistake to make a real run at it. However, a lot can happen in 13 races, so I suggest you stick around to see the end.

*Honorable Mention:* *Parker Kligerman* has finished in the top 5 in three of the last four races and is tied with Joey Coulter for 2nd in the Rookie of the Year points standings for the Truck Series.

*Justin Allgaier* – Allgaier’s performance in the six races since his win at Chicago has been somewhat sketchy, finishing in the top 10 three times, including a fourth-place run last weekend in Nashville. He has maintained his fourth-place position in points for the last nine races and seems to be loving life right now. Of course, when doesn’t he?

Still, I can’t help but think the lack of consistency is what is ultimately hurting Allgaier. Though fourth in the points is nothing to be ashamed of, with drivers like Ricky Stenhouse Jr. and to a lesser extent Elliott Sadler and Reed Sorenson running up front with the Cup Series regulars, Allgaier needs to step it up a notch to contend. I can’t help but think if he’d just grab a few more top 10s, we might see him closer to the top of the standings and maybe even battling for the championship once the series reaches Homestead.

*Aric Almirola* – Almirola has found some momentum the last couple of weeks, with two consecutive fifth-place runs the last two races, plus a ninth-place finish in Daytona. Almirola is behind Allgaier in the standings, sitting fifth, 71 points out of the lead.

I highly doubt Almirola will be a serious threat for the title, which is disappointing considering he is one of the more experienced drivers in the series and has some heavy duty sponsors on the hood of his car. Like Allgaier, inconsistency seems to be the biggest hurdle to overcome, but unlike Allgaier, Almirola hasn’t shown that “spark” or competitiveness that convinces me he has what it takes. Yet.

*Honorable Mention:* *Todd Bodine* has had three consecutive top-10 finishes, the longest streak of top 10s he has maintained all year. His only other previous top 10 runs were a third at Kansas and another third at Darlington.

*Steve Wallace* – Whilst destroying the cars of his competitors week after week, Wallace maintains some level of competitiveness all his own, finishing in the top 11 in three of the last four races and maintaining his position inside the top 10 in points. As much flak as Wallace takes for wrecking himself, though, he only has three DNFs all season, but the more important statistic — lead lap finishes — tells a different story.

In 20 races this year, Wallace has only eight lead lap results, never finishing on the lead lap for more than two consecutive weeks.

In the last few races, his finishes haven’t been all that bad, but not without tearing up someone else’s equipment before all was said and done. All because of a last name and a multi-million dollar sponsor. Life just isn’t fair sometimes, is it?

*Matt Crafton* – If not for the win in Iowa, I probably would have just knocked Crafton right to the cold section, but that hardly seems fair since bad luck has played a part in the disappointing finishes. In Texas, Crafton made contact with Austin Dillon that sent him up into the outside wall and ruined his day, then followed that up with a blown engine in Kentucky.

However, last weekend in Nashville, the excuses don’t stem much further than “handling problems” and that’s where the concern should lie. Aside from the victory, Crafton hasn’t finished inside the top 10 since Dover in mid-May, a dramatic fall-off from the first six races of the season when he was, for the most part, inside the top three in points. He’s since fallen to sixth, and faces an uphill battle if he wants any shot at contending with ThorSport Racing teammate Johnny Sauter for the title.

*Ron Hornaday Jr.* – 2009, when Hornaday won six races, had 15 top-5 runs, and won the championship, seems like a long time ago. Though he started off the year strong, Hornaday only has one top-15 finish in the last five races and could find himself outside of the top 10 in points if he continues this downward spiral.

With Mark Martin struggling on the Cup Series side, I guess 2011 is just not the year for the 50+ group.

*Cole Whitt* – Whitt has shown flashes of brilliance several times throughout the season, becoming the first rookie driver to ever lead the Camping World Truck Series standings, then contending for the victory at tracks like Dover and Darlington.

Sometime around Kansas, though, the rookie driver hit a wall. In the last six races, Whitt only has one top-10 finish and has fallen to fourth in points. That is still an impressive position for a rookie, but he’ll need to get out of the funk he is currently in if he wants to maintain it.

*Honorable Mention:* *Mike Wallace* has only two top-10 finishes all season for JD Motorsports, even with movie Cowboys & Aliens and G&K Services on as a sponsor for several races this year.