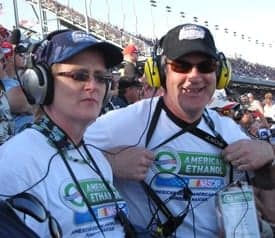 Among the myriad of changes NASCAR introduced in the 2011 season, one of the most significant was the switch across all three major national series to Sunoco Green E15 fuel, a new 15 percent ethanol blend fuel made with corn grown in the United States. Growth Energy, a leading ethanol advocacy organization, created the American Ethanol partnership to push for broad acceptance of a renewable domestic fuel for all American motorists.

Alongside the launch of the new, greener fuel, the nation’s corn growers have joined forces with NASCAR to promote the use of corn-based American ethanol. As an Official Partner of NASCAR, The National Corn Growers Association has leveraged its relationship to spread the message to NASCAR fans around the country about the role American farmers play in the development of ethanol.

“We’re greatly excited about this opportunity to help educate NASCAR fans at the race tracks and around the country about the great work of our corn growers in feeding and fueling the world,” said NCGA Chairman Darrin Ihnen, a family farmer from Hurley, S.D. “Ethanol is a growing use for corn, and provides us a domestic, renewable fuel that reduces emissions and creates jobs right here at home.”

Jim and Elis Long, corn farmers from Wisconsin are just some of the many members of the National Corn Growers Association excited about their partnership with NASCAR.

And it’s a partnership everyone at NASCAR is excited about. Prior to the start of the season Brian France, Chairman and CEO of NASCAR reinforced this point: “NASCAR is very proud to welcome as partners the hard-working family farmers all over the United States who grow the corn that will be used in our new Sunoco Green E15 fuel. We are happy our sport can play a part in creating jobs and fostering energy independence by using a renewable fuel grown and produced in America.”

NCGA has worked closely with Growth Energy throughout the first half of the 2011 NASCAR season to create educational and promotional activities in support of the corn growers who play a vital role in the American ethanol industry, including painting and decaling the backstretch at the recent STP 400 Sprint Cup race at Kansas Speedway – a race where Clint Bowyer ran an American Ethanol paint scheme. In addition, a public awareness campaign for NASCAR Green, featuring images of American farmers was launched during the Daytona 500 and corn farmers have been on hand at many races throughout the season to answer questions about their contribution to producing this renewable ethanol.

Prior to the Cup race at the venerable Indianapolis Motor Speedway, both Growth Energy and the National Corn Growers Association (NCGA) were present at the NASCAR Fuel for Business Meeting on Friday, July 29th in Indianapolis with Rock Tolman, CEO of the NCGA giving a speech. The meeting served a purpose for every NASCAR official partner, coming together to try and foster new business relationships and deals with each other. One such successful example is the Ford Partnership recognition program. Through the program, Ford has sold 20,595 vehicles to official NASCAR partners including 7,033 vehicles to UPS employees, 1,264 vehicles to Sprint employees, 324 vehicles to Cintas employees and 153 vehicles to employees of Office Depot – an impressive return given the partnership recognition program is only four years old.

Overall, though, the message of the NCGA, stated by Ihnen is simple and clear: “The goal is to bring ethanol’s positive messages from job creation to cleaner air to consumers. When people hear a message like ‘American Ethanol: Trusted By NASCAR,’ that carries a lot of weight and adds to ethanol’s credibility and reputation.”

_This is a sponsored advertisement. All rights reserved._