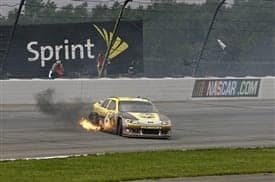 A month ago, David Ragan was on top of the world.

He had won a race, was in the top 20 in points and seemed like momentum was clearly on his side to make the Chase, if not as a wild card then as a member of the top 10 in points.

That was a month ago.

On Sunday, Ragan crashed out of the race at Pocono, and in so doing, made his road to the Chase that much bumpier.

At Daytona, David Ragan looked like a sure thing for a Chase wild card spot but a series of not so great performances since, including a spin at Pocono this week, have left his chances looking slimmer.

After winning at Daytona, he finished eighth at Kentucky, then 14th at New Hampshire. He won the pole for the Brickyard 400, then finished 23rd. On Sunday, he wound up a disappointing 34th.

It’s not just Ragan. Kasey Kahne and several other drivers are in the same boat. They have to win, or finish in the top 5 or 10, to have a chance. After wrecking with Juan Pablo Montoya, ending a miserable day for Red Bull Kahne probably has no shot other than to win his way in. Ragan has one victory, but he’s behind Brickyard winner Paul Menard in the points – he needs more points or another victory to make it.

As such, that’s a pretty common scenario. In reality, it means the pressure is ratcheted way tight on that group of 10 drivers that aren’t automatically in the Chase as of right now.

Consider what Ragan ran into on an early restart at Pocono.

“We had a good run getting into turn three,” he said. “Kyle [Busch] was pretty fast coming up through the field and I just passed some cars on the bottom, so I went down there and I think two or three other cars had the same idea and I just got pinched down.”

“I had to keep it down and just ran out of race track and got loose and spun it out. I was probably a little too aggressive this early in the race, but if you’re not aggressive on the restarts and pass a few cars, once you get strung out after 10 laps you just can’t hardly pass.”

That, in a nutshell, is what the drivers not in the top 10 are looking at: gotta hustle, car won’t work the way I need it to… crash.

“Our car was driving better than it did when they dropped the green flag,” confirmed Ragan. “And I was just trying to be as aggressive as I could… ran out of race track and didn’t have enough room to chase it.”

For Ragan, it means he’ll drop farther away from the top 12, even with the victory. It means that Menard, should he just bring it home and not get into a mess, will gain more ground. It means Ragan is running out of time and options.

“Trying to make this Chase, we need as many points as we can,” Ragan fretted. “I’ve said all along we need to be in that top 12 or 13, or get a second win, so there’s still a lot of racing left. There is gonna be some bad luck for some of these other guys we’re racing for it. You don’t want to give up anything and we’re gonna give up some points today, so that means we’ve got to go and be extra aggressive these next few races.”

And so spins the vicious cycle. There’s no other option. You must make things happen on the track or you’re going home, in a sense, while the 12 guys who made the Chase are racing for the big check and the trophy. And now, for guys like Ragan the path gets even harder; Brad Keselowski, with his victory Sunday has emerged as the primary wild card contender – with two. Even Menard, seemingly in perfect position after his Indy victory is now faced with the daunting task of possibly catching Denny Hamlin or adding a second trophy to his display case to have a chance.

During the last 10 races, even now the tendency among drivers is to not interfere with the Chase racers, lest they unwittingly affect the outcome with a move or two that catches a Chaser unprepared. So, we’re back to having to get what you can get early on a restart and then just battling your car and the track.

“You’ve got to hustle on these restarts,” Ragan said. “If you can’t pass within the first seven to 10 laps, you’re really just getting single-file and run. Our car was driving pretty good and I just thought I was the only one going low, and Reutimann got underneath someone else. Typically, you’d have a little bit of wiggle room and I wiggled a little bit trying to stay off of him and spun out. If I had to do it all over again, I would have probably made the same decision, but I just didn’t have enough room to do what I needed to do.”

Kasey Kahne is another one with similar problems. He’s been wicked fast at nearly every track, but is the most unlucky driver since Mario Andretti started slowing down at Indy. If it’s not a part breaking, it’s tires. If it’s not tires, it’s a crash. If it’s not a crash, the handling that had been so good early in the race takes a siesta and leaves him with an evil Red Bull Toyota.

He doesn’t have a victory to put up there with Menard and Ragan, and unless he gets one soon, it’s not going to matter.

What we have here, with the way the Chase system works, is the potential to briefly create some tension among the top 20 and hopefully, make the racing more competitive.

But in NASCAR’s law of unintended circumstance, they’ve also made the cars nearly undrivable unless the teams hit the sweet spot right off the trailer. One NASCAR crew chief, when asked about finding the sweet spot on the new car, inquired if I knew where it was, as he hadn’t found it yet.

The fact that the teams have to race on a new tire compound every week isn’t helping, and that there’s no testing on tracks that might actually do some good. You can’t simulate Talladega, and you can’t simulate a lot of other tracks.

Guess what? The teams are going to spend more money searching for a solution in the lab than they would have by testing every other week, so the main reason for the testing ban is already moot. And for Ragan and several others, dreams of the Chase will evaporate within the next few weeks unless someone finds a fix-it or happens to find the sweet spot a week or two in a row.

That’s no way to run a railroad, or, by default, the biggest motorsports series in North America.