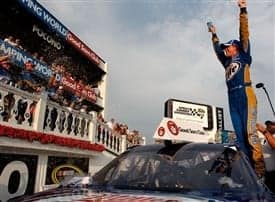 The Key Moment – Kyle Busch got so preoccupied with Jimmie Johnson’s attempted divebomb pass to the inside, a quick move on turn 1 of the final restart they both flat out let Brad Keselowski get away.

In a Nutshell – It wasn’t very exciting, there wasn’t a lot of passing and rain caused a two-hour delay, but at least the winner wasn’t determined by fuel mileage.

Dramatic Moment – That final restart had all the makings of a disaster.

Johnson and Kurt Busch spiced up the pot a bit on the final lap. Post-race comment analysis… advantage, Kurt Busch.

Give Keselowski style points for even getting in his car Sunday after a triple digit wreck at Road Atlanta that broke his ankle and left him bruised and battered. To win the race after all that was a major display of intestinal fortitude. Didn’t Denny Hamlin win a bunch of races last year after knee surgery? Perhaps trauma to the lower extremities makes a guy faster.

Ironically enough, had it not been for the rain delay this would have been one of the faster 500 miles at Pocono. But I’m still for breaking both Pocono dates into a pair of 200-mile races.

Once again, a comparison of this week’s Nationwide and Cup race yields the same old results. Smaller race tracks and slower speeds make for better racing.

Best wishes to Drs. Joe and Rose Mattioli, well-respected owners who have cultivated the Pocono track all these years. They announced their retirement earlier this weekend, unexpectedly; grandson Brandon Igdalsky now holds the title of President and CEO.

Why is it NASCAR seems to want to lump all their most boring races into the summer stretch?

I dunno, but I think if I worked for the No. 22 team and Kurt Busch started complaining about the car while leading, I’d just lay aside my headset and go home.

OK, so Carl Edwards is going to stay with Roush Fenway Racing. Apparently, the Ford Motor Company had to throw in a bunch of cash to seal the deal. It’s about time. Roush and Ford have had a habit of letting their most talented drivers defect to other brands over the past couple decades.

You have to figure when a race transporter entering the track manages to take out the starter’s tower you’re in for a long, difficult weekend.

Really? ESPN continued a live interview while Taps was played as part of the pre-race ceremony? And this is the day after this country lost 31 soldiers in an attack in Afghanistan? That’s just disrespectful.

Had it rained a little harder and longer, Joey Logano would have won the race. To compound his misery, a pair of poor pit stops plus a flat tire sent him tumbling to a 26th-place finish.

As one might expect at Pocono, Hamlin ran up front and had a real shot at winning until a pair of miscues in the pits derailed his little red wagon. Lugnut problems left him fighting for 15th.

David Ragan’s chances at a competitive race ended barely 20 laps into the proceedings when he backed into the wall. Ragan wound up 34th.

Juan Pablo Montoya usually runs well at Pocono, but he was off-key to say the least on Sunday. A late-race wreck with Kasey Kahne only extended the misery; in the two races since Brian Pattie was replaced, he now has an average finish of 30.0.

Ricky Stenhouse Jr. won Saturday night’s Nationwide Series race in almost unbelievable fashion. Leading on the last lap, Stenhouse blew an engine exiting turn four. Edwards was closing hard on his teammate but was unable to see through the smoke or steer on the oiled down track; he ran right into the back of Stenhouse, propelling him across the finish line with the two back tires several feet off the ground.

Jeff Gordon started the Pocono race in 31st after slapping the wall in qualifying. For the first half of the race, he seemed unable to stay out of his own way but rallied back to a sixth-place finish. Plus, Gordon was back in his comfortable position of having the broadcasters all but cutting out little red construction paper hearts for him as they sang his praises and celebrated his “resurgence.”

Kyle Busch bought out the day’s first caution only 12 laps into the race with a single-car spin. Yet he recovered well enough to finish second.

Johnson thought he had a transmission coming apart late in the race but it turned out to be nothing. He went on to run fourth.

Tony Stewart had yet another miserable run going by halfway once an equalized tire dropped him off the lead lap. But somehow or another, Stewart clawed back and wound up in 11th at the end of the race. I think he took a shortcut.

Edwards remains atop the points but is now only nine ahead of Johnson. Kyle Busch moves up a spot to third, just two points behind. Kurt Busch advanced two spots to fourth while Kevin Harvick fell two spots to fifth. Matt Kenseth fell a spot to sixth; all those drivers, along with seventh-place point man Gordon are a full points’ worth of races ahead of 11th.

Drivers in point positions eighth through 12th held serve this week. While Biffle in 13th is just three points out of the top 12, that’s not going to matter unless he wins a race. Ranked 18th in the standings and having won two races this year, Keselowski currently holds the top “wild card” spot, while Hamlin would grab the other, hanging on with a single victory in 11th.

Overall Rating (On a scale of one to six beer cans, with one being a stinker and a six-pack an instant classic) — We’ll give this one three cans of lukewarm stuff. Like I said, it wasn’t decided on fuel mileage.

(Some of you have asked what sort of race gets a full six-pack? Saturday’s Nationwide thriller gets a perfect score.)

Next Up – The wallowing walruses of Cup cars take to Watkins Glen. Yawn. See ya in a couple weeks when real racing resumes.