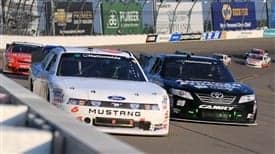 Roush Fenway Racing’s Mustangs had finished 1-2 four times this season prior to Saturday night’s race at Iowa, so Ricky Stenhouse, Jr. beating Carl Edwards to the stripe wasn’t the most remarkable outcome statistically. But this finish was so much more. In a race that saw the two teammates trade paint and get hot under the collar for the second consecutive week, Stenhouse had nearly a second on Edwards heading into the final corner when his engine expired. Edwards, who had enough momentum to clear the No. 6 and steal the win, got caught up in the cloud of smoke and oil from the expired motor, slammed into the back of Stenhouse’s car, and in doing so secured the second career win for the current points leader. Edwards, polesitter Elliott Sadler, Josh Wise and Aric Almirola rounded out the top 5.

Ricky Stenhouse muscled his way out front at Iowa, then held off Carl Edwards despite his dramatic engine failure off turn 4 to score the victory.

In addition to the chaotic finish, Saturday’s race was marred with tire failures that reflected just how aggressive teams have been setting up their cars, now that familiarity with the Iowa Speedway is growing. A track featuring an extensive amount of time turning led to a rash of blown Goodyears that ruined the days of many, from Jamie Dick at the back of the pack to Justin Allgaier at the front.

Stenhouse was able to extend his points lead on the back of the win, but the extension was minimized both by Sadler, whose No. 2 team managed to turn around ill-handling woes early into a top-5 result with stellar pit work all evening, while Reed Sorenson improved as the night wore on to sixth in the final running order. Reported attendance was at nearly 50,000 for Iowa’s second event of 2011.

The 2011 title chase looks like a *three-horse race* at this point, and all three demonstrated just why they are contenders on Saturday night. For *Stenhouse*, a win meant not only a sweep of Iowa for the season, but a strong follow-up to an Indianapolis race that saw the No. 6 the class of the field. Not to mention that Stenhouse opted not to play big picture but take it to teammate Carl Edwards and come out on top. The winner’s points are nice, but that Stenhouse raced hard with Edwards, took exception to getting pushed around and aggressively stormed back to take the win is going to translate to a confidence boost that’s going to give him a lot more points down the road.

For as good a night as Stenhouse had, though, *Elliott Sadler’s* third-place run was a huge saving grace for the No. 2 team. Though the No. 2 car won the pole, they nearly dropped out of the top 10 during the race’s early green flag runs; outstanding pit work from a KHI organization that’s been maligned for the same in years past proved to be enough. And as for *Reed Sorenson*, the No. 32 car had all the looks of a top-15 entry on an off night for Turner Motorsports. By evening’s end though, the methodical approach that has made the No. 32 team the model of consistency this year translated into another top-10 finish, one that kept the top three in points within 17 markers of each other.

Victory celebrations like this are becoming a weekly possibility for Ricky Stenhouse, Jr. and the No. 6 NNS team.

*JR Motorsports* continued their recent upswing in results, with *Josh Wise* and *Aric Almirola* finishing fourth and fifth in the final running order. For Josh Wise, it was his first top-5 finish since 2008 and the best of his career, while for Almirola it was his fourth consecutive top-5 result. Statistic of note: this was the first time in JR Motorsports history that the team had two cars finish in the top 5 without a Cup regular behind the wheel.

Kevin Harvick opted to give *David Mayhew* a ride in his No. 33 NNS car after seeing just how well the West Coast veteran did in his truck at the same track earlier this season, and boy was that the right decision. Mayhew led laps, kept his nose clean and was also the beneficiary of KHI’s stellar night on pit road, a combination that had the No. 33 machine in the top 5 when the race went green for the final time on lap 227. Had Wise not tapped Mayhew out of the groove in turn 4 early in that run, the 10th-place finish that Mayhew ended the night with would have been even more impressive.

*Justin Allgaier* looked to be the title favorite earlier this summer on the heels of a fuel mileage victory at Chicago. Since then, the No. 31 team has been snakebitten, be it running out of gas at Road America or going up in flames at Indianapolis just a week ago. This weekend, trouble only took 23 laps to surface, as Allgaier blew a tire and slapped the turn 4 wall. The rest of the night would be spent behind the wall, in the pits fixing additional tire failures, or limping around. Allgaier’s 29th-place finish was his worst since Dover in the spring and marked the first time he’s had two consecutive results outside the top 25 since the Bristol-Montreal stretch back in 2009.

*Sam Hornish, Jr.* scored a tremendous opportunity courtesy of Brad Keselowski’s injury in testing earlier this week, being given the keys to the No. 22 car at Iowa. Hornish came into the race doing everything right; a top-5 qualifying effort after having one of the fastest 10-lap averages in Happy Hour, and that continued when the green flag dropped as he stormed to the lead by lap 13, leading a career-best 39 circuits. That night derailed, however, when Hornish became one of the many to have to pit under green with a blown tire. The 24th-place finish did not show even remotely how well Hornish ran this Saturday night, the worst case scenario for a guy trying to keep himself on the map.

A blown tire led to an ugly ending for Sam Hornish, Jr. on a night that should have impressed onlookers at Iowa.

*Mike Wallace* and the No. 01 team were able to secure a one-race sponsorship deal from Iowa 80 Truck Stop after their long-running promotion with the film Cowboys and Aliens came to a close, but not even a welcome new backer could keep Wallace from falling victim to a tire failure, hitting the fence in turn 2 after completing only 99 circuits. The 31st-place finish was the worst for the JD Motorsports team since Richmond.

*Blake Koch* endured by far the hardest wreck of the weekend when he cut a tire in turn 2 on lap 219, slamming the outside fence so hard that his car lost the brakes. Without any ability to stop, Koch’s No. 81 machine kept on rolling and pounded the interior wall (which has no SAFER barriers).

Another type of ugly, however, would describe the incident that transpired on lap 48 after *Jamie Dick* hit the turn 4 wall with a tire failure. Well after hitting the fence, Dick moved down towards the apron on the frontstretch… and ran smack into the passing car of *Eric McClure*, who himself was nursing a cut tire back to the pits. Regardless of whether driver or spotter was at fault, there was no reason whatsoever for the contact between the Nos. 02 and 14 to occur. Anyone remember what happened with Alex Kennedy at Dover?

*Underdog Performer of the Race: Joey Gase.* *Scott Wimmer* and *Jeremy Clements* both finished better with solid runs on Saturday night, but local boy Joey Gase deserves the shout-out for a squeaky clean Nationwide Series debut. The 2009 late model champion at the nearby Hawkeye Downs came from a 34th-place starting position to finish 20th in his first ever race at this level. The result was more impressive in that it was Go Green Racing’s first top-20 result on an oval since Charlotte back in May.

Cup regulars scored 2 of the top-10 finishing positions, occupied 3 of the 43 starting positions in Saturday’s field, and took home $102,336 in purse money.

*Joey Gase*, *Charles Lewandoski*, *Robert Richardson*, *Mikey Kile* and *Mike Bliss* all ran the distance in Saturday’s race and didn’t receive mention of any kind on ESPN’s telecast. In addition, *Jennifer Jo Cobb* received mention only as lapped traffic and was not confirmed as out of the race following her engine failure, while *Derrike Cope*, *Tim Schendel* and *Morgan Shepherd* were all mentioned only as lapped traffic. In all, 9 of the 28 cars that ran the distance and were not start-and-parks, Cup regulars or involved in incidents received limited or no mention, or 32.1% of the field.

* Iowa Speedway gets all the hype it does for a reason. The racing is freaking incredible, and this Saturday was no different. I am biased towards short tracks, and this was a perfect reason why. Anyone not entertained watching this event is either brain-dead or completely unwilling to acknowledge a good race when they see one.
* For all the talk in the Roush Fenway Racing camp this week about the re-signing of Carl Edwards and just how big a deal this was, Saturday night illustrated just how big a deal it is that they have the development duo of Ricky Stenhouse, Jr. and Trevor Bayne in their stable. Stenhouse took Carl Edwards by the horns and proved up to the task; as for Bayne, though tire troubles ended his day early, Saturday was still a clinic in how to drive a car. There were two episodes that proved it: Bayne racing Hornish for the lead early in the event and then avoiding disaster, racing side-by-side with an out of shape Michael McDowell later on. Clearly, the Daytona 500 winner demonstrated a mastery of his periphery, anticipating what was going on around him and displaying total track awareness. There’s a reason this guy was so highly touted even before February.
* This standalone stretch of Nationwide races has been great. Shame it has to end.