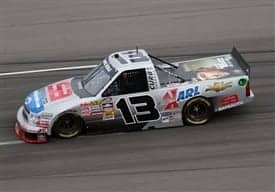 Johnny Sauter may have had the fastest truck at Pocono – he just never had the track position to contend for the victory after starting at the back of the field.

*Who Should Have Won: Johnny Sauter.* Kevin Harvick did have the fastest truck on both Saturday and Sunday morning, but Johnny Sauter’s crew turned in a performance that might as well have produced a trophy. Coming in as the points leader, Sauter ended up wrecking his primary truck in qualifying and went to a backup with no laps on it for the green flag. Sauter’s crew was seen visibly wrenching on it through the plethora of early caution flags that dotted this event, even going under the hood to make suspension adjustments. When all was said and done, that and pit strategy had Sauter in the top 5, where he finished, even extending his points lead over second-place Austin Dillon.

_Editor’s Note: Sauter’s No. 13 truck failed post-race inspection; the right-rear corner of the vehicle exceeded the maximum height restriction. Penalties will likely be announced this week._

It’s hard to imagine any team at any level of NASCAR in recent memory having the kind of luck the No. 5 team has had in 2011, even including their recent stretch of top-15 results. They hire a former champion in Travis Kvapil, who had won four races in his last full-time Truck campaign, yet find nothing but wreck after wreck after wreck, to the point that they go out and hire another former champion in Todd Bodine to drive. This weekend, Bodine proved to have what the team was looking for, scoring a top-10 qualifying effort and running in the top 10 late in the going. Yet, right on queue, disaster struck on lap 49, with a cluster involving Austin Dillon and Ron Hornaday combining to send Bodine spinning across the frontstretch. Bodine charged back during the final restart, and 12th place was still one of the team’s better results in 2011. But given the circumstances, it was another shortcoming for a team that was expected to be a title contender.

Turn One Racing would certainly have to say yes after their time spent in the Poconos. Cole Whitt, who not too long ago was leading the Truck Series points, finished outside the top 10 for the fifth time in the last seven races, with all four of the drivers ahead of him in the standings gaining further ground when the weekend came to a close. Peyton Sellers made that look like child’s play. The No. 66 hauler knocked down the track’s flagstand entering the raceway on Thursday. Sellers saw his truck’s motor blow up during practice Friday. He was unable to complete his qualifying lap because the replacement motor was missing. Then, when the race went green, Sellers got run over from behind in turn 3 trying to avoid the David Starr/Brendan Gaughan dust-up on lap 38. It all came to a merciful end on lap 42, when Sellers’ truck stalled out and wouldn’t restart on the backstretch access road. When all was said and done, that meant he finished 25th in his first national touring series start since Gateway last October. It’d take some folks another eight-month stint to work up the confidence to try again after a weekend like this one.

By the time the red flag flew over this race on Saturday when the rains drenched Long Pond, PA, the Truck Series had completed 17 laps, six of which were under yellow. And yet, despite having contested a number of green flag laps that wouldn’t constitute a support division feature at the local dirt track, there was legitimate strategy talk hovering about whether or not the race would stay under yellow long enough to stay out and get to halfway. It fortunately never got to that, and all 50 laps and then some were eventually run, but still… 53 laps, 22 of them under yellow. A national touring series race that pays points equal to 250 miles at Daytona, 200 laps around the high banks of Bristol, decided after 31 laps of green flag racing. 2.5-mile track or not, 125 miles is way too short, and there’s really no reason for the race to be that quick. Throw the weather out the window, and say it’s still run as a doubleheader with the ARCA race on Saturday. What’s stopping them from running a 200-mile race? Starting at 1 PM, even running the extra 30 laps of Truck racing would still never bring darkness in as a concern.

Kevin Harvick grabbed the CWTS trophy at Pocono, but it left Bryan Davis Keith longing for a longer race.

Aerodynamically, the trucks already produce the best racing that is seen at any level on these long, aero-dependent race tracks. Cutting their features short on the same circuits makes absolutely no sense.

*No. of Rookies in the Race:* 5 (Coulter, Kligerman, Piquet, Paludo, Whitt)

*Rookie Of The Race: Joey Coulter*

Johnny Sauter and the No. 13 team’s grit-it-out performance Saturday and Sunday at Pocono allowed them to leave with a five-point lead over Austin Dillon, with James Buescher, Timothy Peters and Cole Whitt sitting 19, 28, and 40 markers back respectively. All of this will likely change on Tuesday, as penalties are expected for the No. 13 team failing post-race inspection. Sauter leaves Pocono the leader, but Dillon may well enter Michigan in that role in a few short weeks.

“I didn’t have anything for Kevin [Harvick]. He was in a league of his own.” – _James Buescher, third_

“I think you saw the [No.] 18 [Busch] drive back up through there with tires. Tires still meant something. Our truck was just so fast that there was really no reason to give up the track position to come and get tires, since we were good on fuel.That’s one of the shortest races I’ve raced in a long time, and the strategy changes a little bit. You’ve got to get out there quick and try to put yourself in position quick on strategy, and you don’t have a lot of chances to make things happen if you’re off the pace. They [the team] just did a great job of hitting it right off the truck, and that makes life easy.” – _Kevin Harvick, race winner_

“We had a really, really good race. We put ourselves in contention to finish in the top 10. Unfortunately, the track really changed on us. We were really, really tight compared to what we were yesterday and that was the reason why we struggled a little bit. I really felt like we put ourselves in a position to finish in the top-5 and my Tundra was plenty capable of doing that. Just that we were not so fast in the short runs.” – _Max Papis, 11th_

*Up Next:* The Camping World Truck Series heads to the Michigan International Raceway in a few weeks for the VFW 200 on Saturday, August 20th. Last season, Aric Almirola took the win but is unexpected to defend his title given his full-time Nationwide Series duties. Coverage begins at 12:30 eastern on SPEED.