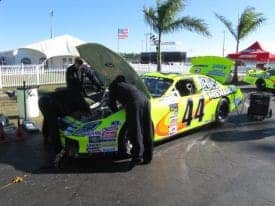 _It’s hard to think of something Frank Kimmel isn’t familiar with in ARCA racing, but this year the nine-time champion is playing the chaser, with Ty Dillon running away with the series crown while making a mockery of the competition in top-notch equipment. Kimmel is nonetheless a top-10 contender week in and week out in 2011, continuing to play the role of elder statesman in a series long known for driver development but suffering through several smaller car counts this year at races. Frontstretch caught up with Kimmel at Pocono to hear firsthand why his program’s clicking, how the ARCA garage is weathering the trials of 2011 and much more._

Bryan Davis Keith, Frontstretch.com: *You’re playing the role of the chaser, after a nearly decade-long run you had in the No. 46 car.*

Frank Kimmel: Yeah, Grant [Enfinger] and I were talking about that earlier, that it’s like we’re racing in the B Series right now. Ty has got things covered right now. He’s running fast, he’s running good, he’s not wrecking. He’s a very formidable opponent, for sure, and that’s showing on the track. He’s finishing and he’s winning races.

Nine-time ARCA Champion Frank Kimmel has learned just how difficult it is to succeed as an owner / driver in recent years.

Keith: *Where is Kimmel Racing right now? How close is a return to Victory Lane?*

Kimmel: We’ve been really good up until a couple races ago. Our cars have been running really well. We led some laps, we’ve been competitive, we’ve done some things very well, but we’ve never quite gotten there. [Ty and RCR] have made it harder, for sure.

We just need to keep improving on our equipment. Our cars have been good, but you don’t really realize how not good they are until you have someone like Ty that comes in and shows you. And not just Ty, but some of the guys that race part-time, like [Kevin] Harvick, they’ve been really competitive, too. We have a ways to go to get our equipment up to that level. Unfortunately, it takes money to do that. Our budget, we’re pretty much at the extent of it right now running what we’re running, so we’re going to have to take that and make it better.

Keith: *Being an owner/driver hasn’t proven the place to be in a lot of racing series recently, but you’ve done it and stayed competitive. How have you done it, and can it still be done at this level?*

Kimmel: Oh yeah, it absolutely can be done at this level. I think an owner/driver can do well here. The trick is to figure out the balance of money you need to spend to be competitive. If we had another million dollars, $500,000, would that automatically make us competitive with Dillon? Probably not. I mean, it would make it better, it would separate us a bit from the crowd that we’re racing. But [it’s not] just the preparation, just the cars they’re running. They have a vast pool of knowledge. They just won the Brickyard, and Richard Childress’ teams are pretty good across the board. They have that bank of knowledge sitting there that they can draw from and apply to these cars here. An individual owner driver like myself and my brother from Indiana don’t have the ability to do that. And things have changed here. The radial tires continue to change, we run them now on the short tracks, so we don’t have the huge amount of back notes that apply to the race cars what we’re doing right now. It’s a big hill to climb.

Keith: *Does the addition of resources and influences such as RCR change your role as a mentor?*

Kimmel: I don’t think that role will ever change, just because I’ve been around so long. And I don’t mind helping the younger guys, or even the older guys that haven’t been here before.

Keith: *Without money, what can you do as a single-car team to get better?*

Kimmel: You have to improve on what you can do at home. Every thing you do has to be improved upon. This car for us here at Pocono is a result of that. We’ve done a lot of work on this car, tried to make it better. We’ve worked on the body, we’ve got a new FR9 motor which is new for ARCA this weekend. We’ve tried everything we know to make it a little bit better. We’ll see if that helps us catch up some. The Hackenbrachts, they hired Kevin Reid. Chad wasn’t that competitive, he was struggling, wrecking a car or two, probably overdriving a bit trying to make up for what he had. With Kevin, that’s been the light switch for that team. And that’s cool, they’re nice people and Kevin’s actually helped us some to get our stuff better, get more forward bite. When you don’t have the resources to bank on, you’ve just got to buff and polish what you’ve got.

Keith: *The car counts have been down a bit in 2011. What would you assess as the health of the ARCA Series?*

Kimmel: I think it’s an interesting situation. We had 50 some cars show up to LOR, which is a short track that doesn’t pay very well. I think the series is healthy. I don’t think it’s prospering at this point, but I don’t think any racing series is right now. Everyone is struggling a little bit, but I think ARCA is doing what they can to cut the costs for us to race every weekend. Fortunately, we’ve got a great sponsor and that helps us, but other teams need them, too.

Keith: *What have they done to cut costs?*

Kimmel: They’ve cut the days we’re at the race track. They continue to limit us on tires to help us there, and I think they could even take that a step further with Hoosier, have the tires last longer… that’s a double-edged sword for them to figure out. Tires are always expensive. Travel, tires and motors. They’ve got to address the motor situation. Our motors are going to get out of hand again, but they haven’t quite caught onto that yet.

Like I said, this week we’ve got an FR9, the next generation Ford motor. I know all the manufacturers have these current, top-of-the-line Cup motors. But they’ve all got tons of older stuff just sitting there that will work, make close to 900 horsepower, which is more than enough. And I’ve suggested to ARCA that they not allow us to run the new generation motors. Let’s cut back, stop it right now. I think the engine builders would be tickled to death, as now they wouldn’t be sitting on warehouses full of stuff anymore. We’d be better because it would cost us less to rent these motors or buy them, and the fans would not have any idea that we had 25 or 50 less horsepower. They’re always talking about ways to slow us down, so I don’t know why they haven’t gone to that. If there’s a bigger reason to it, I don’t know about it.

Keith: *Talking the future of equipment… when are we going to have to see a COT in ARCA?*

Kimmel: I can see it coming in the future, but I think it’s going to take 4-5 years before we see that. You want to talk an expense… we’ll just have to see that happen when it happens. I can see ARCA bringing it to the superspeedways first, so you’d only have to buy one car for that deal. The COT car is a great car for safety, and that’s the only real reason to have it. Well, at Salem and Toledo and Winchester, the speeds aren’t that great. So do it where it’s going to help you the most.

Keith: *You got to tackle Lucas Oil Raceway. Was that race as good as it looked on TV?*

Kimmel: I hate that NASCAR is doing that [not coming back], or Indianapolis is doing that, whatever the case may be. It was an honor and pleasure to be there, it’s a really cool thing to get to race at that race track. My particular race sucked because my car was so bad… I can probably say that was the worst car I’ve ever had in ARCA, it was so bad! I wrecked it a little in practice, so I don’t think we ever quite recuperated from it.