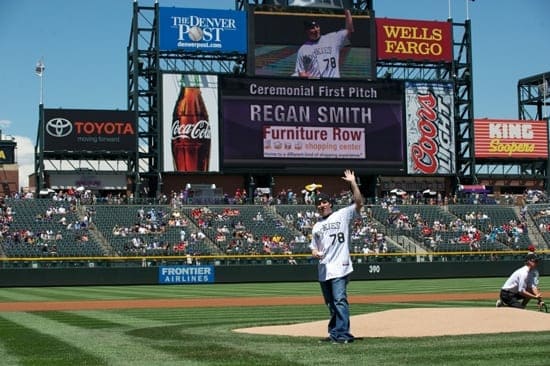 Regan Smith waves to the crowd last week after throwing out the first pitch before a Colorado Rockies game at Coors Field.

The first thing that I want to mention this week is how happy I am for Paul Menard and his entire family. Indianapolis means a lot to them and I know just how much that Brickyard 400 victory meant. I was full of mixed emotions during the final laps of that race. We could see the win and the battle for the lead and could not be a part of it because of the fuel mileage situation. Still, it was really cool for both Paul and me to get our first wins this year, and in two of the four biggest races.

It definitely has been a popular year for first time winners. I think it’s a product of these new cars that everyone is trying to figure it out. The competition is so close week in and week out, that anyone can play the right strategy and get the right track position and it will work out really well. Once you get out in front, it’s a lot easier to stay there because of the aero package. Although that certainly isn’t the only reason why we’ve seen an influx of first timers. Sometimes, you just have years where this type of thing happens. The stars have aligned a little bit and I don’t think having several first time winners is a bad thing for our sport.

Regan Smith, in full concentration mode after sending the ceremonial first pitch towards the field before the Colorado Rockies game last week.

Speaking of the prevalence of track position strategy this year, some have suggested that it has created an environment where the fastest car doesn’t always win. I would say the fastest car wins every week because he is the first to the start/finish line. I’m not particularly a huge fan of fuel mileage races when you have to conserve a lot. But with that being said, someone made a good point to me the other day, that in other sports, teams can run out the clock at the end of the game. Some may play really well the first half and get destroyed in the second half and still win.

There are a lot of different things that can happen to impact the outcome of any sporting event. I think the extra strategy makes NASCAR an even bigger team sport, where every element becomes more crucial. The gas man needs to get every last drop in the car and the pit crew needs to shave time off of the stops. The crew chief and engineer need to do things to make the car faster. The driver needs to find ways to get more speed out of the car. It’s an evolution of our sport and I think that’s OK.

Our Furniture Row Racing Team was actually involved in two consecutive fuel mileage events at New Hampshire and Indy. While we do similar things to conserve fuel at each venue, we may do them in different ways, depending on what style of track it is. I learned a lot at Loudon about how to save fuel and how not to save fuel. So when the same scenario played out at Indy, I had the lessons from New Hampshire fresh in my mind and fortunately, it worked out that time.

A few weeks ago, we had the inaugural race at Kentucky, where I had actually raced in the Nationwide Series. I found that it is not exactly like other mile and a half ovals we race on. It was definitely harder to pass there, but we’ve been seeing that in a lot of places. Kentucky just got a little more attention for it because it was more pronounced there. You could catch a car that was three tenths slower than you and struggle to get by them. Most places you could still get by. It’s just because the cars were so even. With that being said, I thought it was a good race for the fans. You could sense the excitement with the sellout crowd.

Unfortunately, some people didn’t get into the facility and the only thing you can ask them is to not hold that against everyone and come back out next year with the understanding that we’ll get it fixed. There have been many times that we’ll go to a track for the first time and that type of thing happens, no matter how much you plan. I was one of the many who got stuck in the traffic, so I understand the problems. The priority for us though is the fans though because without them, we’re not able to race. I know the track is going to do everything they can to fix it.

Last week I got to throw out the first pitch at Coors Stadium. I definitely threw a strike, for Yao Ming that is. It was straight as an arrow, but a bit high. Unfortunately, my pitch set the tone for the Rockies, as they had a rough game. Despite the loss, it was really neat to get to participate in an event like that and get recognized in Denver. A lot of my crew guys were there since the team is located near by. I was really happy that they could share the experience.

I think that the media and people out there have started to realize more and more that there is a race team in their backyard. When you’re the only NASCAR team in the area, you become a big fish in a small pond. It continues to grow and hopefully as we continue to have good runs, our recognition will grow. But they’ve definitely adopted us as Denver’s team.

We’ve been settling in to our new home out west as well. The wildlife is also getting settled in with us, as some of you may have seen my Tweet a few weeks ago about our first black bear sighting. I’m sure it won’t be the last. Overall, it’s going good and I really like it out there. Denver is a nice area. It’s a little bit of a change from the humidity and high temperatures in the east. We don’t even have air conditioning because it gets cool enough at night that you don’t need it.

Thanks as always for your support. I really appreciate it as does our entire Furniture Row Racing Team.