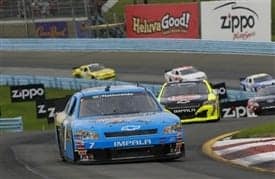 Many driving enthusiasts and professional racers alike have memories of taking on their favorite twisty section of public road. However, stock car racing is not traditionally twisty, despite it’s origins in illegal running of the ‘shine on back roads. Yes, they turn, but mainly to the left, with little elevation change. That might change in the near future.

This weekend here at Watkins Glen, there have been a couple of topics that have gotten a lot of play at the track. One is the ongoing rivalry between Jimmie Johnson and Kurt Busch, which resulted in rather terse comments from each driver during their media availability.

The other topic has been the question of whether NASCAR needs to adjust their schedule to give road courses more importance. This could be done in multiple different ways. One way would be to move one of the two existing road races to the Chase. Another would be to add another road race to the schedule.

The idea of adding a road course to the Chase has been floated about almost as long as there has been a Chase. The main argument is simple: If you’re going to bother having something like a Chase at all, it must be representative of all the different types of tracks on the schedule. In its present form, the Chase for the Sprint Cup does not meet that criteria. There are five races on intermediate 1.5 mile tracks, one on a superspeedway (Talladega), one on a short track (Martinsville) and two that kind of act like it (Loudon and Phoenix, although the reconfiguration makes that track a wild card), and a high-banked one mile oval at Dover. No road races.

Jeff Gordon is one driver that agrees with the idea that having a road course in the Chase would be beneficial, saying on Friday “I’ve always said that in order to make the championship fully complete and find out the true best team and driver, the only thing that I think we’re missing in the Chase right now is a road course.”

“There are only two road courses throughout the year, and that’s less than ten percent of what we do, so I don’t think it does,” Kenseth said on Friday. “It’s kind of a novelty and it’s fun to come and do because it’s something different and changes the pace up, but I don’t think it really needs to be in the Chase…”

Adding another race to the Sprint Cup schedule would be tricky, already full at 38 dates. If one were to be added, it would likely have to come at the expense of another oval already on the schedule. Which one would likely be slashed in order to make room for a third road race? That’s unclear. A look at attendance figures at certain tracks could give a good idea, but nothing would be in stone.

Then there is the question of where it would be. On Saturday, Jimmie Johnson stated after the Nationwide Series race that he would definitely be in favor of having a third road race in Canada. He did not mention any specific tracks, but he did say that there are a couple of venues in Canada that could easily host a Cup race. One possible site could be Mosport International Raceway in Bowmansville, Ontario, a track 50 miles outside of Toronto that Ron Fellows just recently bought into. The Circuit Gilles Villenueve in Montreal would be another possibility, though that track would have to work out their promotion issues before hosting a Cup event. Regardless of where a Sprint Cup road race in Canada would be, it would likely be well-attended by a group of fans that have often been left out of being able to travel to Sprint Cup races.

Moving either Watkins Glen or Sonoma to the Chase would be an interesting move as well. Both events are, however more or less entrenched in their current places on the Cup schedule; Watkins Glen has occupied the same slot on the schedule every year since the series returned in 1986, while the Sonoma has moved around a bit, but generally run towards the end of June.

Should Watkins Glen’s “esses” be a part of the Chase? Phil Allaway says “yes!”

Another topic that has been broached recently is moving the annual Cup race over from the 2.45 mile short course to the 3.37 mile long course. This longer configuration branches off from the short course on the exit of Turn 9 and goes into what is known as “The Boot.” The Boot is a downhill plunge to the “toe,” Turn 11. That is followed by an uphill blast before heavy braking for a right-hander. Then, another plunge downhill into a valley before rising back up to rejoin the short course in between that course’s Turns 9 and 10.

Only a few of the current drivers in Sprint Cup have raced on the long course configuration, but many of them, including Tony Stewart, are thrilled with it. Stewart has never actually raced on it, but drove it as part of Seat Swap: Stewart vs. Hamilton back in June. At that time, he said that he would petition Watkins Glen International President Michael Printup to switch the Cup race over to the long course. At the time, Printup was receptive to the idea. However, some renovations would need to be made to the Boot to put it up to NASCAR’s standards; there is a large trap in Turn 12 (or 8, depending on who you ask) that would likely need to be paved over.

“As Tony [Stewart] said when they did the Swap [Hamilton vs. Stewart], it is a shame we don’t use the Boot here,” Montoya said. “But, it is what it is.”

Gordon continued to state that the idea of NASCAR shortening up road courses for Sprint Cup and Nationwide Series races actually hurts the show.

“I think sometimes that’s one of the things we miss on the road courses as we shorten the tracks up,” Gordon continued. “Particularly [at] Sonoma when they took out that inner loop (Turns 4-6, which included the Carousel), to me, it took away the best passing zone that we had on that race track and I miss that and the challenges that came along with it.”

Historically, NASCAR has made moves to shorten road courses when they felt that it would put on a better show, or if it would have been too hard on brakes. Years ago, NASCAR used a shortened 2.62 mile circuit at Riverside that bypassed Turn 7. At Infineon Raceway, they purpose-built a shortcut just for NASCAR to use starting in 1998 (and have re-profiled it twice since).

However, the track shortening for NASCAR was not limited to after the track was purchased by SMI. Prior to the Cup Series racing there, shortened versions of the track were used for Winston West (now K&N Pro Series West) races in the early to mid-1980’s. Finally, Mexico City’s Autodromo Hermanos Rodriguez was curtailed from 2.795 to 2.518 miles (bypassing the Horquilla complex) when the Nationwide Series raced there.

As Frontstretch’s resident road course racing zealot, I am strongly in favor of additional road races on the schedule and the idea of a road race in the Chase. If there is one facet of racing that was affected the most by the move to permanent double-file restarts, it is road racing. Prior to the change, the only double-file restart all day was the initial start of the race.

Now, we’ve had a substantial increase in aggressive driving and bumping on restarts since the move has been instituted. Some writers have taken to calling a place like Infineon Raceway the “New Bristol.” However, some drivers aren’t necessarily the biggest fans of the move.

“When they announced that [the double-file restarts] were going to happen, you know the rumblings in the garage were like ‘Oh my God, wait until these road courses, this is going to be disastrous,'” Clint Bowyer said on Friday. “It’s pretty much held up to that. Despite being an August race since 1986, I would not be opposed to NASCAR moving the race to early October in order for it to be part of the Chase.

Some diehards might object since that was traditionally the time of year that Formula One raced at the Glen, but that is not important. Such a move would substantially raise the profile of a race that many of the series’ regular beat writers chose to skip this year. Also, it couldn’t hurt to lengthen the race a little, possibly to 250 miles or so.

As for additional road course venues that could host races, a number of them have hosted races in at least one NASCAR series. There’s Portland International Raceway, which hosts the K&N Pro Series West currently, and formerly hosted a Truck Series event after the half-mile Portland Speedway converted to dirt when they couldn’t afford a repave that NASCAR required.

Heartland Park Topeka is still an option, but it’s only 70 miles from Kansas City. Road Atlanta, where Brad Keselowski had his big testing crash, would likely be out for the same reason. That track hosted a couple of Busch races in the mid-to-late 1980’s. Lime Rock Park in Northwest Connecticut would likely be considered a little too short for Sprint Cup on a road course, and would be nigh on impossible because the track is dark on Sundays.

There are many more options here in the United States that if the Sprint Cup Series raced there, they would put on a great show. That’s also without factoring in street courses. NASCAR has raced on temporary circuits before, but not for decades. The earliest road races were at temporary airport circuits in places like Linden, New Jersey and Bremerton, Washington. The closest thing to a street race that NASCAR has held for the current Sprint Cup Series was the first race at Watkins Glen. That race was held on a circuit comprised of local roads that are basically on top of the current circuit’s property (Ex: The current ticket office is just off where the course ran, and the TV Compound is just west of it).

However, there have been a couple of NASCAR-sanctioned street races in the past. In 1986, the Winston West Series raced on a temporary course around the Tacoma Dome in Tacoma, Washington. There was even a street race in Los Angeles for NASCAR’s Featherlite Southwest Series in the late 1990’s.

Regardless of where any additional road races might end up, the current rules would mean that they would be very exciting, competitive, and full of action. Yes, there won’t be 25-40 lead changes during the race. Unfortunately, that’s just not in the cards for a road race. However, the Cup Series will put on an excellent show anywhere they are scheduled to race, whether they’re turning left, or left and right.