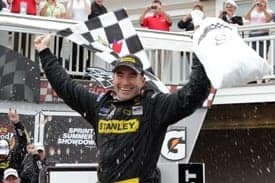 When the weather relented enough for us to actually get a race in on Monday morning the end product was a typically dramatic and tumultuous, crash-induced festival of road course racing. Mercifully, everyone emerged unscathed and it really is a testament to just how safe these cars are especially when you consider the ferocity of the wrecks for Denny Hamlin and also the Davids (Reutimann and Ragan.) Tempers, as is often the case with the twisties, were at a premium after the race with Boris Said and Greg Biffle getting involved in a little contretemps. It’s hard to defend Said too much; after all he’s raced just 43 Cup races in the past 13 years, plus he triggered the brutal wreck between the double zero and the number six cars… but it sure did make good television. The whole “someone text me his address” and “he’ll show up at a race with a black eye somewhere” were among many quotes that registered as instant classics; too bad Said won’t be entered in the race at Michigan this weekend to keep this going. Aside from the post-race shenanigans, though there was plenty of on-track action worthy of discussion and we’ll start this week with Cup’s Watkins Glen winner: Marcos Ambrose.

Every Sunday morning, I get the privilege of being a guest analyst on the ESPN Radio Carey and Coffey show. This past weekend I predicted an Ambrose victory – a comment that was met with much derision as the co-hosts felt I should have been bolder with my selection. Ah, well. A perennial threat on the road courses, Ambrose, in his 105th top echelon start, was long overdue his first Cup series victory (not least after the Infineon fiasco last year) and you can’t help but feel happy for the amiable Tasmanian native and, indeed, the whole Richard Petty Motorsports organization. Victory, at long last, is very much a vindication of Ambrose’s decision to uproot his family and move thousands of miles around the world to chase a dream. Sometimes nice guys do finish first and I, for one, am delighted Ambrose got it done this weekend (even if his spotter amusingly referred to it being a Nextel Cup Series win on the radio.)

*The Year of the First Time Winner:*

And speaking of first time winners, this really has been the season for just that. It’s a topic “I tackled a few months back”:https://frontstretch.com/dpeters/33899/ with Ambrose adding his maiden victory to those picked up by Trevor Bayne (Daytona 500), Regan Smith (Southern 500), David Ragan (Coke Zero 400 at Daytona) and Paul Menard (Brickyard 400) since I wrote. To have such a plethora of first time winners speaks to the level of parity this season and also the unexpected nature of the racing this year – two good things however you slice them. The next most likely first-time winner would seem to be A.J. Allmendinger but in the crazy, tumultuous year it might be someone completely out of the blue. Simply put; it is extremely, extremely hard to win a Cup race (if you’re not named Jimmie Johnson) so to see the jubilant face of a first-timer in Victory Lane – and to have a sense of how much they went through to make it there – are exactly the sort of feel good stories NASCAR craves. Long may it continue.

We saw yet another shuffle in the Wild Card battle this weekend with Denny Hamlin’s 36th-place finish following a wreck he described as “about the scariest I’ve ever been in a race car” seeing him slip behind Clint Bowyer in the points standings. But Hamlin’s sole victory at Michigan gives him one of the two all-important spots headed back to the track where he won earlier this year. After Fuel-Mileage-chigan we have a tremendous stretch of tracks (Bristol, Atlanta and Richmond) before we begin the 2011 Chase and I think it’s far from a bold proclamation to say we will see some fireworks between now and the Chase field being locked down. Brad Keselowski does appear to be in pole position (with his two wins and solid run of recent form) but anything can and probably will still happen in this topsy turvy season. I know there are those that carp and moan about the Wild Card but for me it’s one of the best rule tweaks of this or any year.

Title sponsor Sprint’s Summer Showdown promotion is a great example of how to activate within NASCAR — a reprise, of sorts, of the Winston Million campaign — and it’s something we need to see more of as sponsors make their dollars work as hard as they possibly can. To be fair, with the continuation Toyota’s hugely popular Sponsafier and Crown Royal’s “Your Name Here” race promotion it’s an integration we have seen quite a bit of in recent years and the more sponsors can weave seamlessly into the fabric of the sport, so much the better. Sprint’s program might not see a winner (for more, go to “sprint.com/speed”:http://www.sprint.com/speed ) but it will add just another twist to an already convoluted block of stories yet to be told before the Chase begins. And that’s all good in my book.

In an ESPN interview post-race, a shaken (but not stirred) David Reutimann responded to a question about his vicious wreck when asked what hurt most by saying: “my pride.” And it’s a theme that perhaps extends across the whole Michael Waltrip organization. Let’s not forget, either, the huge crash that Martin Truex, Jr. suffered at Martinsville this Spring, the most notable memory in a year this veteran would like to forget. The wheelman of the No. 56 NAPA Camry sits only on the cusp of the top 20 (Truex is level with Montoya on points but in 21st place on tie breakers) while the Reut is a distant 26th – almost a hundred points out of 20th. For two teams expected to make a push for the Chase a combined total of zero wins, zero poles, two top 5s and nine top 10s, 2011 has been the definition of a down year. But the stronger links with Toyota Racing Development (TRD) and Joe Gibbs Racing should ensure that, if not this year, MWR will likely experience something of a renaissance heading into 2012. For two of the nicest drivers in the garage and the sport’s most loquacious owner, an uptick can’t come soon enough.