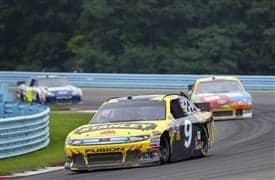 I know that journalists are supposed to remain objective and focus on the facts, the details and provide an unbiased observation of events, but I’m not a journalist in that textbook sense; I am a columnist, allowed to offer my opinion on assorted matters. So, here goes nothing… Marcos Ambrose totally rocks! His victory on Monday at Watkins Glen was the culmination of many months of anticipated success. And it was not because of his move to Richard Petty Motorsports; that ride change caused many NASCAR observers to question his judgment, especially given that he still had about a year left on his contract with JTG Daugherty Racing. A move to RPM seemed more about future opportunity and faith in an operation, and less about the prospect of immediate results. Instead, when Marcos Ambrose crossed the finish line to earn his first career Sprint Cup win, his success had already been fully predicted by me (and several million others, too, but I digress…)

It’s been said that variety is the spice of life. It’s also been said that change is typically for the better. Both of these adages, as clichéd as they are, could be the new marketing slogans for NASCAR’s Sprint Cup Series. Having five first-time winners (so far) in a single season is quite a shift from what is usually the standard M.O. for Cup races. Certainly, your typical lineup of the usual suspects have graced the Monday morning sports pages in 2011. To NOT read the names of your more “regular” winners like: Kevin Harvick, Kyle Busch, Kurt Busch, Jimmie Johnson, Denny Hamlin, Carl Edwards and Matt Kenseth would be highly unusual, since these are the drivers who most often steal the thunder from their fellow competitors (along with the large trophies, the big prize money, the championship points, the championships themselves (Mr. 48), and the major sponsorship deals).

This year has already seen a long-lost “regular” find his way back to Victory Lane as Jeff Gordon broke a 66-race losing streak at Phoenix in February (and scored another win at Pocono back in June). All eyes remain on the No. 88 team, however, as it struggles to regain the mojo it had going earlier in the year. The odds looked pretty good that Junior’s three-year victory drought would end at some point during the summer, but the dark cloud still follows Steve Letarte and company as they cling to a spot in the Chase. The same dark cloud hangs over Tony Stewart, as well, as his No. 14 Chevrolet has been oh-so-close, yet oh-so-far from the Winner’s Circle in 2011.

Marcos Ambrose is just the latest of a variety of first-time winners this season with his win at Watkins Glen on Monday.

But even if those two never taste victory champagne this season, stock car racing has its fair share of future prospects to steal the spotlight. The bright cloud following NASCAR this year is the one that allows sunshine and first-place prize money to light the path of such drivers as Trevor Bayne, Regan Smith, David Ragan, Paul Menard, and now Marcos Ambrose. Suddenly, it’s fun to open up Monday’s newspaper and check the Cup results; the standard response of “Oh…him again” has been replaced with “Who? You’re kidding!” It’s as if NASCAR instituted an “equal opportunity” program, but maybe they have. Rule changes, a new refueling system, and other more “official” advances seem to have opened the door for new drivers to enjoy newfound success. Fuel strategy and smart pit stops have led to some of these victories – thanks to the combined efforts of hungry drivers matched with savvy crew chiefs – but sucking it up and outracing the cars around you is still the age-old secret to writing NASCAR history. When the books close on the 2011 season, the recognized “old guard” will be joined by new names celebrating their new achievements.

Marcos Ambrose’s win in the Heluva Good! Sour Cream Dips at the Glen (huh?) was anything but a sudden success. His record at Watkins Glen has been nothing short of dominant, seeing that he scored three consecutive Nationwide wins there and has had a second-place finish and two third-place results in the three Cup races he’s run in Upstate New York. Ambrose has also enjoyed a better-than-average string of top 10’s and top 5’s on NASCAR’s other tracks this season; he’s scored seven top 10’s and four top 5’s in 22 Cup races thus far in 2011. These numbers are up from his 2010 accomplishments, which were better than his 2009 statistics. Showing continued improvement, that stop in Victory Lane seemed inevitable, and it came on Monday after a rain-soaked weekend along the Finger Lakes.

More importantly – apart from the significance Ambrose’s win had in regard to the 2011 Cup season – his success helped boost NASCAR’s overall public image. I call this the “Horatio Alger” factor: Ambrose scored one of those meaningful “rags-to-riches” victories that earned him recognition and respect from a larger audience than just the faithful who march as part of NASCAR Nation. For those saying, “Who?” Horatio Alger, Jr. was a preacher and writer who penned a series of highly formulaic (and highly successful) books aimed at boys. His intent was to instill his readers with a sense of good values and moral behavior. By living such a life, a boy could go on to a successful and respectful future. In his books, the protagonist always did what was considered to be “good” – he listened to his elders; he refused to smoke, drink, and gamble; he learned to read and write; and he developed a solid work ethic right out of Puritan ideals via Benjamin Franklin’s “Autobiography.” His efforts were always rewarded with a steady job, trustworthy friends and often a mentor who served as a reliable role model for the boy’s adult life.

In contrast to the protagonist’s “good” choices, there was always an antagonist who embodied “poor” choices. This boy was often a bully who smoked, drank, gambled away the money he typically stole, and avoided personal betterment at all costs. The end result for this “bad” influence was always a life destined for struggle, poverty and loneliness. By the conclusion of each book, the protagonist achieved financial opportunity and the respect of those around him. The concept behind Alger’s stories was for impressionable young readers to learn how moral, ethical, and “proper” behavior paved the way for a happy and successful life, and the books wound up influencing some of the 20th Century’s greatest and most revered leaders in both business and government.

So what does this little lesson in American literature have to do with Marcos Ambrose, the other “first-timers” this year, and NASCAR’s relationship with a global culture? By adding new names with unique stories to the Sprint Cup legacy for 2011, we’re seeing how racing struggles evolve into racing triumphs. Not that the “usual suspects” for Victory Lane are bad or undeserving people – they and their teams work long and hard to make it look easy – but it’s a reminder that the unsung hero can earn the recognition and respect they deserve for their efforts.

When I’m approached by people who want to “talk NASCAR” with me (often because they know it’s an area of interest and a good way to start a conversation), they have – in the past – opened with a comment about Jimmie Johnson or Carl Edwards and their latest/greatest win. More recently, they start the discussion with a question…. something like “So, who’s this Regan Smith guy?” or “Is that Paul Menard related to the place where I bought my basement shelving?” With four more races until the Chase, and then the ten “post-season” events leading up to the finale of the 2011 schedule, we could very well have additional “new” names to consider and even more “first-time” accomplishments to celebrate.

When I go back to campus next week, I expect to be answering inquiries about “that Australian guy who won the race with all of the wrecks.” I’ll want to say “I told you so!” in response to Ambrose’s victory at the Glen, but I’ll bite my tongue and listen to their excitement about the NASCAR story they read in the newspaper. It’s always good to visit, of course, with a brand new fan.