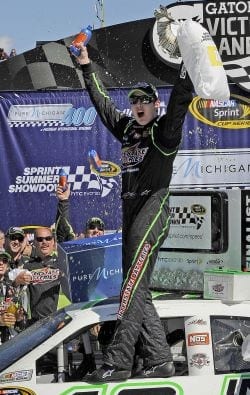 Kyle Busch is putting together the kind of late-season run that we usually see from Jimmie Johnson, putting some sizzle in what is usually a snoozefest at Michigan International Speedway.

Busch won for the first time in the Irish Hills, first running down the leader, Johnson, and then holding the lead on a green-white-checkered restart with three to go. In the process, he jazzed up the usual fuel-mileage-is-king, dare-not-pit-late-because-of-track-position affair.

Problems for Carl Edwards, who went to the garage early on with an unspecified engine malady, and Denny Hamlin, who scraped the wall and lost laps getting it fixed, cost both drivers.

It cost Hamlin more, dropping him two spots to 14th in the points, 59 out of 10th. He is still, for the moment, the last wild-card, but he’s just 18 points ahead of Paul Menard among those in the top 20 with at least one victory.

The fact that there is a wild-card race is adding much-needed emphasis to a race where, in most years, you set a wake-up call for lap 180 and see who emerges as the winner. The way Brad Keselowski is running, there’s a feeling he’ll be out of the wild-card race in short order and into the top 10.

Tony Stewart, who finished ninth, was frustrated with a capital F after the race, even though he’s 24 points up on Keselowski with three races to go to the Chase.

“I will be perfectly honest, at this point of the deal, if we are going to run this bad, it really doesn’t matter whether we make the Chase or not because we are going to be occupying a spot in the Chase that somebody else that actually can run for a championship is going to be trying take because our stuff is so bad right now,” he said on pit road. “We’re wasting one of those top-12 spots right now.”

Smoke gets that way once in a while, and he and crew chief Darian Grubb can’t find the sweet spot to make the car balanced. After getting caught in the remnants of the last-lap crash at Watkins Glen on Monday, he’s hanging on to the top 10 by the hair of his chinny-chin-chin.

He and Dale Earnhardt Jr., who is ninth in the points, six ahead of Stewart, are the only drivers in the current top 12 without a victory. Earnhardt Jr. has not won since Michigan in 2008, nearly 1,100 days ago.

If you want frustration, all you have to do is listen to Earnhardt Jr.

“We had a good car.” Earnhardt Jr. said. “We had a couple of bad sets, well, I don’t know whether they are bad sets of tires, but I put them on my car and they drive like crap. Then I put on another set and it will drive good. I don’t know how to explain that. I’ve been doing that all my life. I ain’t got an explanation for it yet. I had some awesome runs where the car was really fast, then I’d put on some tires and couldn’t drive the car. So, you tell me. I don’t know.”

He was just getting started.

“Racing is frustrating as a whole. That’s a part of this sport. At least we run good when we had our opportunities. We had a pretty good car. We had some bad stuff happen on pit road. We got back up to 10th or ninth, drove it up there. Then, we probably shouldn’t have pitted there at the end. I don’t know. We took two tires like a lot of guys and just didn’t have the good fortune at the end on that last green-white-checkered. We were on the bottom behind the No. 00 (David Reutimann) and some other people that were as slow as hell and just couldn’t go nowhere.”

That’ll do for frustration, and you can tell the pressure is wearing on both drivers.

Kyle Busch will be in the Chase this season, the first driver to clinch a spot with his win at Michigan this week.

Busch, however, has four victories this season and became the first to clinch a Chase spot with that fourth triumph. He clinched at least a wild-card with Sunday’s victory, and has to be viewed as a title threat.

Since 2008, Busch has 19 victories. Johnson has 21…and five titles. Is that going to change? If it does, the Pure Michigan 400 will be recalled as perhaps the turning point.

Busch ran Johnson down, passed him and then took the 48’s best shot on the restart and beat him to the line. Game, set and match to the 18.

The racing at Michigan is an odd combination of flat-out speed and precise handling. There are so many grooves that you can pick and choose your best and just put the hammer down.

The drivers will tell you that it is anything but boring inside the car, but from the stands and at home, it looks a bit like rush hour on I-94…or what rush hour on I-94 used to look like anyway.

The difference is, they’re not really racing each other so much as they are the track and the tires and the fuel tank. That’s why it looks boring.

With the Chase looming, and the wild-card race popping from week to week, there’s enough excitement to cover up some “boring” racing. It’s off to Bristol this coming weekend, so there’ll be plenty of excitement to go around.

Atlanta is always exciting, one way or another, and Richmond can be a flat-out roller-coaster ride.

There’s a bunch of racing yet to come, and this will change before the Chase field is set at Richmond. Probably more than once, if the truth be known.