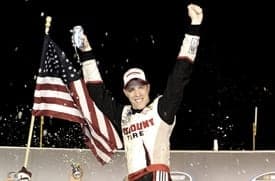 It might be a case of the Monday blues talking, but I’m noticing a trend this season. The trend being that road course races are providing the best quality races this season, with a healthy mixture of bumping and banging, rivalries, and storylines all mixed in. It’s a wonder there isn’t a road course in the Chase, let alone a couple more on the Sprint Cup Series schedule. Personally, I used to be a total road course snob but the last couple of seasons have turned me into a believer.

Familiarity returned to the Sprint Cup Series with Kyle Busch pulling into Victory Lane, one of the “hot” drivers at this point of the season. What a great time to peak, too, with the Chase starting in just a few short weeks.

Let’s take a look at a few other “hot” drivers and the others … well, not so much.

*Brad Keselowski* – I’m still trying to decide if Keselowski’s newfound dominance merely coincides with his ankle injury or if there is something deeper going on here. Keselowski has been undergoing some physical therapy and, while I’m assuming it is for the injuries on his ankle and back, perhaps he’s found something that works for him?

Regardless, Keselowski said post-race (after finishing third, no less) that he wouldn’t be back to 100% health-wise until next season, and if he keeps this streak up that might be bad news for his competitors. Keselowski’s worst finish in the last four races is a ninth-place finish at Indianapolis, and if his success continues, he won’t have to use that wild card. He’ll be solidly in the top 10 in points post-Richmond.

Now the only question is, can Keselowski’s teammate Kurt Busch handle getting beat by the driver of his former car? If he does, at least we’ll know it will be all his @#$% pit crew’s fault…

*Alex Tagliani* – When did the IndyCar Series become the new development ground for NASCAR drivers? No less than six former (or current) open wheel stars—whether in IndyCar, CART, or F1—participated in Saturday’s Nationwide Series race in Montreal, and results were scattered.

However, none were more impressive than current IZOD IndyCar Series driver Alex Tagliani, finishing right behind NASCAR regular Marcos Ambrose in second and leading 11 of the 74 laps. With stars such as Jacques Villeneuve and Patrick Carpentier in the field, Tagliani wasn’t a driver on everyone’s radar but they knew who he was post-race. Think he might follow fellow IndyCar driver Danica Patrick over to NASCAR?

Maybe, but let’s see how he does on more oval tracks first. Tagliani has only ever competed in one oval race in any of NASCAR’s three national series, finishing 38th in a Nationwide Series race in Phoenix back in 2009.

*Jeff Gordon* – Can you say “streaky”? I could be wrong, but I think Gordon has occupied all four of the sections in this column at least once this season. He started off the season with finishes so pitiful (aside from the win at Phoenix, of course), most doubted the decision by team owner Rick Hendrick to pair Gordon with crew chief Alan Gustafson (myself included). However, the No. 24 team eventually picked themselves up by their bootstraps and grabbed a handful of top 5s and another victory at Pocono. Though they aren’t mathematically locked into the Chase just yet, realistically their spot in the 12-driver field is all but assured.

What kind of momentum they will have heading into the Chase, though, remains to be seen.

*Scott Speed* – Not many drivers have experienced a bevy of emotions like Scott Speed has this season, from suing former team Red Bull Racing over the offseason after losing his ride, competing in start-and-park rides when he can find them, and, oh yeah, his wife Amanda is expecting the couple’s first child here in the next few weeks. It’s amazing that Speed has maintained the outgoing and “I-don’t-care-what-you-think-of-me” mentality that is the reason so many fans love (or hate) him.

Last weekend, Speed landed a ride with Kevin Harvick Inc. for the Nationwide Series race and finished a solid sixth, then announced on Monday that he would have a full-time ride with Whitney Motorsports for the rest of the year.

I don’t know about you, but I’m feeling another “milk and cereal” video.

*Honorable Mention:* *Ron Hornaday Jr.* has been quietly consistent this season, with three finishes in the top 10 in the last four races.

*A.J. Allmendinger* – With all of the first-time winners we’ve seen this season, Allmendinger looks to be next in line for a breakthrough victory.

Unfortunately for him, though, the results don’t show much promise in that department. Allmendinger has only led 24 laps _all season_, and has struggled to even finish in the top 10 with only 5 top 10 results all season.

Still, all hope is not lost. Allmendinger is currently 15th in points and, though he’s behind the two wild card spots of Brad Keselowski (12th) and Denny Hamlin (14th), Keselowski has been running well enough to possibly break into the top 10, especially with Hamlin struggling as of late. A win in the next three weeks, though unlikely, could earn Allmendinger a wild card spot in the Chase which would do wonders for the team.

However, don’t get your hopes too high. Like I said, performance-wise, Allmendinger hasn’t shown he has what it takes to win and the next three racetracks are some of the toughest on the schedule: Bristol, Atlanta, and Richmond. Two of those are short tracks, with the biggest crapshoot of them all coming this weekend in Bristol. His best shot would be a potential fuel mileage race in Atlanta, but otherwise I don’t’ really see this one happening. Maybe next year for the ‘Dinger.

*Regan Smith* – What an underdog story it would be to see the Denver-based Furniture Row Racing inside of the Chase come September, but sadly this is a story that will have to wait to be told. Aside from his victory in Darlington—overshadowed as it was due to a glorified pissing contest between Kyle Busch and Kevin Harvick—Smith has had an underwhelming season with only four top 10 showings in 23 races this season.

Not even the wild card could save this team at this point, since the rules show you have to be inside the top 20 in order to be eligible. Smith was only inside the top 20 the first two weeks of the season, then dropped like a rock to almost outside of the top 30.

It was fun while it lasted, though, and I don’t think we’ve seen the last of this guy. Smith has shown before that he is a helluva racecar driver, but he needs better equipment in order to excel. I can’t help but wonder if he was put at the level of a Joe Gibbs Racing or, heck, even with some Richard Petty Motorsports equipment, he could do surprisingly well. However, putting sprinkles and glitter on a pile of crap won’t change the fact that it’s still crap, and Smith will just have to make do for now.

*Honorable Mention:* *Bobby Labonte* suffered some misfortune in Michigan, losing control of his car and spinning to bring out the caution. He wound up finishing 15th, his highest finish since the July race at Loudon.

*Trevor Bayne* – In three of the last four races, Bayne only has one finish inside of the top 20, a surprising downturn for the driver everyone thought would be replacing Carl Edwards once he went to Joe Gibbs Racing (oops!).

However, this isn’t from lack of trying. Instead, it’s a plethora of bad luck in the last month of racing that has kept Bayne from stronger finishes. At Lucas Oil Raceway it was a blown engine, in Iowa it was two loose wheels and a speeding penalty, and last week it was a certain Canadian model/racecar driver causing problems.

So never fear, Bayne fans. He just needs to find a way to steal Jimmie’s horseshoe and all will be well again.

*Juan Pablo Montoya* – What has happened to Earnhardt Ganassi Racing this season? We’ve already documented Jamie McMurray’s struggles this year, and Montoya is in the same boat. In 23 races this year, Montoya has 11 finishes outside of the top 20 and only 7 inside the top 10. Sitting 22nd in points with an average finish of 19th, even a wild card spot is out of the question for this Colombia native.

It’s disappointing for this team, considering the success between Montoya and McMurray in 2010 with four wins between the two of them. Now the only thing Montoya is known for is pissing off his competitors.

*Honorable Mention:* In case you missed it, here’s what I said of *Marcos Ambrose* last week: “Once the series hits Michigan, Ambrose will be forgotten and disappear from the spotlight most likely for the rest of the season.” Ambrose finished 27th. Do I win the Sprint Million now?