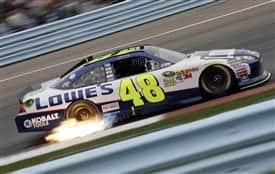 And then, there were two.

Just a pair of races, or 725 laps, if you prefer, separate us from the setting of the final Chase field of twelve, the start of the stretch run of ten races that will decide this year’s Sprint Cup championship. Both remaining events will be run under the lights – Atlanta this Sunday, Richmond the following Saturday – ensuring the final spots for the postseason, along with Sprint’s inaugural $3 million Showdown will have their final chapters unfold in primetime. Each race will also be run at tracks that history suggests promote good racing, mostly every time even with this behemoth of a car. That may very well be a pleasant change, following Saturday night’s not-so-very thrilling race at Bristol that left a sour taste in our mouths (more on that later). But what last Saturday night did do, however, was congest the already confused Chase picture even further. It’s not a stretch to say we might see more swings and shifts of fate these next two weeks then we’ll see in the final ten races, especially if a certain someone decides to step things up in his habitual Chase fashion – which is where we’ll start this week’s edition of Five Points to Ponder.

Don’t look now, but the No. 48 team has turned the corner just in time for Jimmie Johnson to go for his sixth consecutive championship.

*ONE: Double J: Still the Man to Beat*

Sure, Kyle Busch technically owns the first-place tiebreaker and the top Chase seed over Johnson. But a fourth-place finish at Bristol — his fourth straight top-10 and third top-5 in four weeks — was enough to vault the five-time champion into a dead heat with Busch atop the regular season point standings. It is, no doubt, a sickening sight to his fellow combatants to see the champ gearing up at just the right time; while armed with only one victory, the consistency of the No. 48 is what’s back in top form. As most everybody has said all year long – and indeed, for the past half-decade – the title goes through Johnson and all signs are he’s primed for a historic run at a sixth straight crown. By his own almost inconceivably high standards, Johnson has struggled at times this year, especially enduring some rough-and-tumble moments on pit road. But head wrench Chad Knaus has the crew house in order, armed with a new front tire changer from Tony Stewart and polishing every aspect of the team to ensure they’re peaking at the right time. The rest of the chasing pack had better beware: this driver, plus his team is just that good.

Speaking of the rest of that field, one name rising rapidly to the fore in postseason circles is that of Brad Keselowski. Dominant down the stretch at Bristol, he won his third race of the year Saturday night to go along with victories at Kansas (fuel mileage) and Pocono (pure grit and determination). A few weeks back, Brad opined that he might not be ready for a run at the big silver trophy even if he did make the final field of 12, but given the way he’s driven in August and – with the backing of a team growing in cohesion and confidence – he might yet have more of a say than even he perhaps expected this year. Sure, it’s only been a month of excellence, but you only need to look at the way Montoya performed in the Chase two years back for evidence a late summer peak can be sustained. Keselowski, nearly healed from his ankle injury is also helped by the fact that teammate Kurt Busch is running so strongly – despite some incessant carping – and by the sudden cohesion within Penske Racing’s revamped engineering program. With no other cars for Dodge to focus on, beware their two Penske-powered cars in the Chase – both might just have something for the No. 48 down the stretch.

*THREE: Jeff Gordon Is For Real:*

And while I’m on the subject of drivers that should make a sustained challenge for the 2011 championship, how about the 19-year veteran of some 641 races, Jeff Gordon. A third-place finish – his eighth top 5 in 2011 – all but locked Gordon into the Chase after Bristol, his twelfth consecutive finish on the lead lap as the DuPont / Drive For Hunger car has been a Johnson-like model of consistency. At the two-thirds point of the season, Gordon is a scant 48 points back from Kyle and Jimmie plus, he has two wins to his credit (Phoenix and Pocono) that serve as the highest total for this Sprint Cup legend in four years. Leading 317 laps since mid-July, Gordon, newly 40 is running consistently well enough for the No. 24 to be a veteran, middle-aged factor these final ten races. Paired with Alan Gustafson and free of the No. 48 — remember, Gordon and Earnhardt switched team garages in the offseason — 2011 might just be the year that the old hand finally makes a bid for an elusive fifth title.

*FOUR: Leading the Most Laps? Eh:*

In keeping with the unexpected nature of the 2011 season, one other statistical oddity is emerging. In 18 of the 24 Cup races run so far this year, the driver who led the most laps did not win the race, and on six occasions the winning driver has led fewer than ten laps. Kevin Harvick, nicknamed “The Closer” for his late-race exploits serves as a great example. In his three victories, he has led the princely sum of nine circuits: Fontana (one lap led), Martinsville (six laps) and Charlotte (two laps). In all, it’s a 25 percent win percentage for the race’s dominant performer, which compares unfavorably to 2010 (39 percent) and the 2008 and 2009 seasons (50 percent).

Kevin Harvick knows just when to push ahead at the right time this season; he’s won three races despite leading a grand total of nine laps in those events.

Some of these unexpected endings have come as a result of strategy; with passing at a premium like almost never before this season, pit road and fuel mileage gambles have become even more critical tools in any crew chief’s arsenal. It just goes to show that, this year more than any other the team that works both sides of the coin to perfection, getting track position through their mind and MPH will come out on top in the Chase.

*FIVE: Bristol is a Pale Imitation.*

And finally, this week, I want to take a quick moment to reflect on what we saw in terms of on-track action this weekend at Bristol. Simply put: It wasn’t pretty. The repave at one of the sport’s iconic venues has been little short of a total disaster, reducing a legendary race track into almost “just another race.” Bristol may still look like a Coliseum in its outward appearance, but the Thunder Valley moniker appears to be increasingly something of a misnomer. I’m not sure I have the right answer as to what to do (clearly, we can’t put it back the way it was) but something needs to be changed before attendance takes another serious hit. Prior to the repave, a race at Bristol was a “must see sporting event,” and I mean “sporting” in the broader context – not just within NASCAR. Now, based on the evidence in four full years since the track was resurfaced I think it’s safe to say that’s no longer the case.