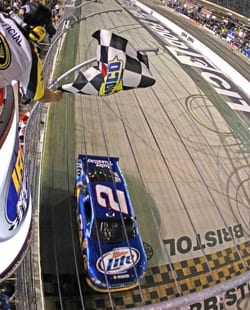 While pit strategy didn’t dictate the outcome of Saturday’s Irwin Tools Night Race at Bristol – as has been the case lately – being the first off pit road was still crucial. It is ultimately what led to Brad Keselowski picking up his third win of the year, passing Jeff Gordon on pit road after both made their final stop.

Maybe passing isn’t a strong enough word. How about speeding?

Brad Keselowski won the Bristol night race under green, but got the track position he needed barreling down pit road.

It was a common theme on Saturday, with Keselowski and Matt Kenseth the two notable drivers that flew past their competitors on just about every stop – gaining precious track position in the process.

The biggest victim of it all, thankfully, was not any crew members or pit officials, all of whom were dangerously close to Keselowski’s drag racing tactics. Instead, it was Jeff Gordon, who led a race-high 206 laps and for the most part was only challenged by Kenseth. He fell all the way back to fifth on the race’s final pit stop and was only able to get back up to third by the time the checkered flag flew.

It was a frustrating way to lose for the five-time BMS winner, and he expressed that aggravation after the race.

“When a guy can run 60 miles an hour down pit road and the pit road speed is, what, 35, then something is wrong with the system,” he said before elaborating further.

“…When you have one [pit stall] and you see the other guys have one, it’s a joke that somebody can leave pit road and run that fast down pit road and then slam on the brakes. Kenseth drove by four cars and so did the [No.] 2 car when he left his pit stall. I just don’t understand it.”

A lot of fans have accused Keselowski and Kenseth of cheating because they were able to go way past the speed limit and get away with it. However, as Gordon pointed out, they aren’t to blame. It is simply a loophole in NASCAR’s pit road system that some were able to take advantage of.

For those of you who are unfamiliar with how pit speed is determined, there are timing lines on pit road at which a driver must maintain a certain average speed between each. For Bristol, the pit speed is 35 miles per hour. The reason Keselowski and Kenseth were not penalized was because they were sitting in between these lines while they were getting a pit stop. As that takes some time, their average speed between those segment lines is going to be quite low… no matter how fast they go after the stop. With the location their pit stalls were in, once the jack dropped, they could take off and go as fast as they wanted, for a maximum about of distance until they reached the next timing segment.

Why did it seem so much more common at Bristol than anywhere else we go to? Gordon explains that it’s worse at some tracks more than others.

“This is the one I’d say that’s most noticeable,” he said. “But Martinsville — there’s a couple of them. Everywhere we go, we look at timelines and see where there’s big gaps in the timelines and try to take advantage of them. And sometimes, it’s more risky than others because you might be pitting in between two other cars, so you’ll pick a spot or a pit stall right on a timeline to gain that advantage, but you might be blocked in.”

“Where here, at least the one that I had and the one that Matt had, when we were — we were wanting to be third in qualifying really, really bad because that’s where that last — that pit stall that Matt had was the cutoff. We knew that the top three would get the best three pit stalls, so we got the next best one, and it had advantages like that. But I think Matt’s seemed to have a little bit more of an advantage. So this is probably the worst one.”

Gordon also touched on how Michigan recently changed their timing lines so no one driver would have such an advantage, something Bristol will also need to do.

“I think the timelines are a big improvement over what we used to have,” he continued. “But there are certain tracks — you look at Michigan last week, they redid pit road, and they completely redid their pit road lines, and there was no stall that had a big advantage at that track because they segmented them in equal segments all the way down pit road. And that’s what they’re going to need to do here eventually, as well.”

The biggest problem going forward isn’t so much the outcome of a race being affected as it is safety. If a driver is able to go almost double the speed limit without getting penalized, it increases the danger for crew members and officials in the line of duty. There were several close calls Saturday where it looked like an official might get hit by a speeding vehicle. In other words, the current system still presents unnecessary danger to people on pit road.

It is time for NASCAR to revise the pit road speeding rules and make it safer and easier for everyone to comprehend. While it would be nice to see radar guns being used, just the way police officers do on the highways, timing lines don’t appear to be in any jeopardy of being eliminated. Whether it is a radar gun or maybe increasing the amount of timing segments, one thing is for sure – what happened at Bristol on Saturday can’t happen again. Eventually, someone on pit road will get seriously injured or killed with the way it is set up now.