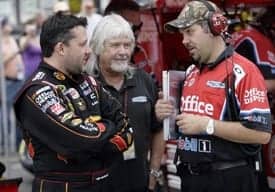 Tony Stewart has dodged more bullets than Superman, but the way things are going, the next one might snuff out his chances at the Chase for the NASCAR Sprint Cup.

Brad Keselowski just keeps winning races, and he’s cutting down the points margin between himself and Stewart, who is clinging tenaciously to the 10th and final spot among automatic qualifiers to the Chase.

No matter what Tony Stewart and Darian Grubb seem to try these days, their efforts have been in vain as mediocre summer runs leave them in grave danger of losing their spot in the 2011 Chase for the Sprint Cup.

Stewart? The man who has won a NASCAR Sprint Cup Series event every year since 1999 has not sniffed Victory Lane in a very long time, and the way his car is running these days, it’s going to be awhile before another whiff wafts on the winds.

The odd thing is, when Stewart won the second of his two titles, he did so with a summer run that included a stretch of five victories in seven races. That burst effectively clinched the title for Stewart before the Chase ever started.

Keselowski, who has won twice since breaking his left ankle in a crash during testing at Road Atlanta, is in a run of first-second-third-first in the last four races. Does this result sound familiar?

True, he’s 11th in the points and just about a mortal lock to make the Chase as a “wild card.” Unless David Ragan or Denny Hamlin win the next two races, he’s a solid lock in 11th place.

Or, as it happens, he might just remove all that wild-card talk and just get in by being inside the top 10 in points.

That brings us back to Stewart.

While Keselowski was winning at Bristol, Stewart was going through a miserable time on the .533-mile, high-banked oval. He ended up 28th, several laps down.

A trend is developing.

When the points stop coming, you watch the final ten races of the season as an interested bystander… not a title contender.

Stewart didn’t have the mojo working when he got to Bristol, and by the time he left, late Saturday night, it was still long gone, into the east Tennessee mist. Nothing worked, nothing made it any better and nothing came of the effort.

“It was better than it was shaping up to be yesterday,” a subdued Stewart said later. “Thanks to our teammates for the help that we got from them that definitely made us better, for sure. [It was] just a rough night. [We] struggled through.”

That about sums it up.

Meanwhile, over in Victory Lane, the newest star in the NASCAR firmament was waxing rhapsodic about winning at Bristol in August.

“The night race at Bristol! This is the race that Tony Stewart, Jeff Gordon and Dale Earnhardt win,” said Keselowski. “It’s the race of champions. I can’t believe it.”

How does this kind of thing happen in the level-playing-field of the modern-day NASCAR?

Easy. Everything just seems to… work out.

It was that way for Stewart back in 2005. He won at Sonoma, he won at Indy, he won at Watkins Glen. It just all clicked. They didn’t come up with something outside-the-box. There was no magic bullet.

It was just a confluence of events, in which everything that could have turned to mud in a heartbeat… didn’t.

“I’m so proud of everyone on this team,” Wolfe said. “To have three wins now in this season from where we started the year just shows all the hard work that everybody has been doing back at the shop. All these guys on the pit crew, we had the pit stop that counted tonight. They did their deal. Everybody is doing their part. We’re building fast Miller Lite Dodge Chargers and I’m just really proud of everyone on this team.”

That’s the way it starts. How it ends is anybody’s guess, but right now, Keselowski and the rest of the Miller Lite Dodge team are the ones to beat. No one is running better, and a whole bunch of them are running much worse.

It’s the time of year when it’s best for that to happen, and it’s Keselowski that has the mojo.

All Stewart has right now is voodoo. Sure, he’s still 21 points ahead of Keselowski in the race for the 10th spot, so he’s technically still in the Chase. For how long remains to be seen.

Asked about his chances of making it in, Stewart shrugged.

“It is no different than it was last week,” he said. “The feeling is the same way, you still want to make it. We’re working hard at it.”

Working hard may just not be enough.