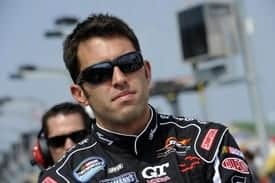 Who knew a fractured ankle could be such a motivator for Brad Keselowski? I feel like this injury could possibly start a new trend. A horrible, painful trend…

With that in mind, I have made the decision that, in an effort to improve my writing, I’m going to jam my foot in the cogs of some heavy machinery and see if I improve at all. Hey, if not, at least I’ll have a good story to tell while I’m talking to my fellow inmates in a straitjacket!

But before they drag me off, into the asylum let’s quickly get back to the business at hand. It’s time to take a look at a few more drivers who, like Keselowski, are on hot streaks of their own — though with fewer broken bones to go along with them.

*Jimmie Johnson* – After stealing a right-front tire changer from “teammate” Tony Stewart and deciding that, “Hey, he’s pretty good! Can we keep him, Chad?,” Johnson continued on a hot streak at Bristol that has seen him finish in the top 5 in five of the last seven races of 2011. Did I mention he’s won the championship the last five seasons, too?

It’s the same old, same old once again at the No. 48 so please, don’t start that crap about the “old points system vs. Chase” argument to bring them down. Johnson’s competitors have been playing by the same rules as he has the past five seasons, and they’ve been unable to seal the deal. Sad, but true.

So while there are still doubters who think that Johnson “just isn’t running very well” this year, I’m here to slam the ruler on the chalkboard of reality and show you that Johnson’s numbers (588 laps led, 16 top 10s in 24 races) prove otherwise. Currently tied with Kyle Busch for the series points lead, it’s a wonder he’s been able to remain so quiet for this long.

I’m not going to deny the fact that the competition is stiffer than it has been in years past. This season has been all about parity and Johnson, armed with just one victory this season will have more drivers in championship contention than he may have originally bargained for. But… he’s still the favorite to be holding the Cup come November. Like it or not.

*Aric Almirola* – JR Motorsports has officially gone mainstream (as if they hadn’t already), with the announcement that Danica Patrick will be driving for the team full-time in the Nationwide Series come 2012. With Travis Pastrana making his delayed NASCAR debut next season, too, I’d be shocked if ESPN executives and their partners weren’t drooling over their keyboards from the dollar signs floating in the air.

Danica Patrick may be stealing the headlines for JR Motorsports, but it’s been Aric Almirola who has really come into his own this season in the Nationwide Series.

Amidst all the excitement, though, JR Motorsports’ current driver Almirola has been quietly snagging top 5s week after week. In the last seven races alone, only _twice_ has Almirola not finished in the top 5… and both of those exceptions were at road courses.

So, pay attention to Almirola while you can; I have a feeling once Miss GoDaddy girl hops on board full-time, you won’t be hearing much about him.

*Honorable Mention:* After failing to qualify for the Camping World Truck Series race at Phoenix earlier this year, most thought *James Buescher* would be out of the title hunt. Think again. Buescher is currently in the best spot to unseat current points leader Johnny Sauter, sitting seven markers out of the lead with nine races left on the series schedule.

*Matt Kenseth* – It appears that the “sarcastic driver of the No. 17 Ford”:http://twitter.com/#!/matt_kenseth17/status/108190694912442368 has entered into stealth mode this August. Consistently finishing in the top 15, week after week, a sixth-place finish at Bristol has now lifted him up to third in points.

For some reason, though, like Jimmie Johnson, it seems very few people see Kenseth as a legitimate title contender. When asked who Johnson’s biggest threat for the championship is, you’ll probably get a response saying “Kyle Busch” or “Carl Edwards.” Rightfully so, considering that both drivers have been very strong this year, but the numbers show Kenseth is also running well enough for the top spot. With 500 laps led, along with two victories he’s put together some of his best statistics since old crew chief Robbie Reiser was on top of the pit box in 2006.

This isn’t just a recent trend for Kenseth, either. After a somewhat shaky start to the year, Kenseth has been a solid top-10 performer all season with a total of 13 such results. That puts him behind only Busch, Johnson and Edwards in that category. So if you’re looking for a championship darkhorse, stop, smell the roses and realize you might have found one over at the No. 17 Roush Fenway Racing shop.

Jason Leffler’s face says it all; we would be cranky, too, if forced to wear a hat that covers up the best hairdo of anyone on the NASCAR circuit.

*Jason Leffler* – His hair should be enough to earn him a spot in this column every week; but, unfortunately for Leffler, this column is a numbers-based one and I just couldn’t justify it.

Except for now. In the past month, Leffler has been consistent enough to finish in the top 15 in four of the last five races, with three of those results earning him a spot in the top 10. His sixth-place position in the points is also nothing to sneeze at; that’s considering Leffler is working with newly-formed Turner Motorsports for the first time. Even if it was essentially the same team as Braun Racing, a team Leffler partnered with for years there were still a lot of internal changes and this veteran seems to have adjusted well under the circumstances.

*Honorable Mention:* Regardless of the incident between him and Kyle Busch, marring Wednesday night’s Truck Series race *Elliott Sadler’s* star is still shining bright in the Nationwide Series. He has four consecutive top-10 showings, leaving the Virginian second in points, just five markers behind Ricky Stenhouse, Jr. Life is good.

*Kasey Kahne* – Headed over to Hendrick Motorsports next season, his “new paint scheme”:http://www.hendrickmotorsports.com/news/article/2011/08/26/5-days-of-Farmers-2012-car-unveil is pretty cool. That’s about the only thing Kahne has going for him right now, though, since he’s only finished in the top 10 once in the last five weeks and only eight times all year.

Clearly, Red Bull Racing isn’t working out well for Kahne, but perhaps Hendrick Motorsports will. If not, at least he’ll be easy to spot!

*Joey Logano* – For awhile, things were looking up for Logano. Unfortunately, over the last few weeks, it’s been back to reality for the No. 20 team. Like Kahne, Logano hasn’t finished in the top 10 but once in over a month, though a pole and a near-win at Pocono were a definite bright spot.

Joey Logano’s future is once again in doubt after a less-than-successful August driving the No. 20 Toyota for Joe Gibbs Racing.

I really wish I could believe in this guy, but every time I think Logano might turn things around, he falls right back into oblivion. For now, his ride with Joe Gibbs Racing appears safe. But how much longer will the team and, more importantly, Home Depot put up with subpar performances while Lowe’s is winning championships every year? My guess is not long.

*Honorable Mention:* Hey, look! *Jeff Burton* actually has a top 10 this year! Too bad it’s the only one and it came at Watkins Glen three weeks ago. New crew chief Luke Lambert was supposed to bring some much-needed help to this race team, but it hasn’t made much of a difference. Even Paul Menard is still beating Burton on a weekly basis and that, dear reader, is very sad.

*Brian Vickers* – Even though he’s without a top-10 result since the Michigan race in June, Vickers has still managed to have himself a good time this season. In 2011 alone, Vickers has skydived into Daytona, swam with sharks, and danced with extraterrestrials on the moon.

OK, so I made that last one up; but considering Vickers’ penchant for outdoor adventures, would it really surprise you?!

In all seriousness, I’m happy he’s been able to enjoy himself so much after blood clots threatened not just his racing career but also his life for most of last year. Now, it looks like a different type of “life” is on the line: his future career. If the results don’t tick up soon, Vickers may not have a ride next season unless Red Bull Racing is able to find some investors; and, even then there’s no guarantee the soon-to-be 28-year-old will be kept.

At least Vickers, in a worst-case scenario can look on the bright side; it looks like he could have a good backup plan as a stunt man.

*Kevin Harvick* – While Harvick was able to take a verbal shot at Kyle Busch in Victory Lane this past weekend (a hobby that happens to be his favorite pastime), it was only a win in the Truck Series, accomplished in his own equipment. And that’s really the only chance he’s had to make some noise on the NASCAR level as of late.

Kevin Harvick proved no match for Jeff Gordon or any other contenders at Bristol; running 22nd, off the lead lap his summer of struggles at Richard Childress Racing reached a new low.

Harvick went from contender to pretender in a matter of weeks and, like his fellow Richard Childress Racing teammates, struggled mightily at Bristol. He finished 22nd for the second week in a row and has only one top-10 finish in the past seven races. His three victories will be enough to give him a high spot in the standings once the points are reset, though, and he should be able to lock up his Chase berth this weekend in Atlanta.

But still… what the heck happened?! All four RCR cars have completely sucked in the last few weeks, to put it bluntly, and with the way things are going I’ll be shocked if Harvick has anything to say about this year’s championship. That’s not good for his team, considering that, unless Clint Bowyer is able to win in the next two weeks, that leaves Harvick as the only RCR car in the Chase.

*Honorable Mention:* While his finishes are enough to warrant a spot in the cold section, *Casey Mears* has done well for the quality of ride he has and for that I’ll give him credit. Still, though, it’s a shame he wasn’t able to capitalize on opportunities with quality teams like Hendrick Motorsports and Richard Childress Racing, among others before being banished to the single-car, partially-funded effort run by Germain Racing.