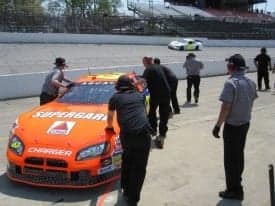 As if making the jump from IndyCar to an open-wheel machine wasn’t drastic enough of a change, Milka Duno’s start to 2011 threw a geographic oxymoron into the mix. One year ago, driving for Dale Coyne Racing in the Indy ranks, Duno ended mid-April having gone from paradise, the illustrious road course of Long Beach, with only a stop at the ultra-modern Kansas Speedway sitting between open-wheel racing and its crown jewel month of May: the Indianapolis 500.

Fast forward to mid-April, 2011. Duno had capped her career debut on the Indian burial ground at the Talladega Superspeedway with a lead-lap finish, then went straight from there to Salem, Indiana, to turn test laps on a short track in the middle of nowhere. It’s a track famous not only for its high banks, but for having two-inch divots in the frontstretch asphalt and a paving job in turn 3 that more resembles the gravel out in the hauler lot.

Catching up with Duno nearly four months later, the Venezuelan was still at a literal loss for words as to how to describe the transition from road course racing to the Salem bullring. “It’s tough” was about all she could muster. Still, for those surrounding her at Sheltra Motorsports, there were plenty of words to go around about that test… and the race that followed two weeks later. On paper, the results were what one would expect; Duno finished 66 laps down in 17th, retired with crash damage (her No. 63 Dodge was caught in an accordion wreck after Bryan Silas checked up to avoid a loose Tim George, Jr. in Turn 4). Words, however, did not tell the tale of a race run without the luxury of TV coverage.

Milka Duno has an aggressive plan to further her stock car career and she’s with a great team to do it in Sheltra Motorsports. (Credit: “MilkaDuno.com”:http://milkaduno.com/)

Said then-crew chief Jon Wolfe: “Milka exceeded all our expectations. Today, she proved she can race against the competitors in the ARCA Racing Series and be competitive.” Team PR rep Tracy Olszewski went even further, exclaiming, “We saw just how much talent she has at Salem. She drove by Frank Kimmel. She drove by Ty Dillon. She really is that fast.”

The degree of difficulty isn’t lost on the driver, though, who despite having started only ten stock car races in her career was surprisingly subdued when describing just how much of a shock transitioning to ARCA, and stock cars, has been.

“Of course it’s different, but I adjust easily to any car I have to drive,” said Duno of her experience in the full-bodied machines thus far. “You have to learn to drive this car a little, it is difficult to drive. But I’m very fast, I’m very flexible to it.”

Duno’s goals for the remainder of 2011 are about what one would expect any developing race car driver to have; the driver stated she’s aiming to win a race, “of course” while also improving her patience on the race track. It’s not anything remarkable… until one steps back and realizes that they’re talking about a driver who in her four years of Indy racing never cracked the top 10, whose biggest call to fame in those four years was a well-televised spat in the pits with God’s own gift to racing, Danica Patrick. Considering that background, striving to win by year’s end in a series that features the best talent that big-time operations like Richard Childress Racing has to offer seems a bit unrealistic.

Then again, it’s hard to blame Duno for sporting such an aggressive development table for herself. It’s not naivete or arrogance talking when she says she’s ready to win now… it’s more the old racing adage that a developing driver doesn’t always know what they can’t do, the same way a rookie will be bullet-fast at Darlington until the Lady in Black jumps out and bites them. Or, in ARCA’s case, that uneven concrete barrier at Salem.

And it’s not like Duno’s career has been completely littered with failure. It’s easy to forget that, unlike the vast majority of drivers trying to make it through the ARCA ranks and up stock car racing’s ladder, Duno hasn’t been doing this her whole life; she didn’t start racing until she was 24, an experienced naval engineer by that time. And despite that, she’s won in her career, and won early; Duno finished second in the Venezuelan GT championship her first year as a driver. Plus, despite her struggles in IndyCar, she’s in a situation that scores of drivers across the world would kill for; fully sponsored, racing in a major touring series for a proven championship-caliber team in Sheltra Motorsports. It’s a story that, just like her race at Salem back in May, doesn’t seem to jive on paper… but she has that opportunity, and is trying to make the most of it.

That same unique background that led to a career in racing has also contributed to Duno having perspective that, on two fronts, make her development as a driver a story worth watching. For one, naval engineering being engineering, Duno is outspoken that her previous work experience certainly does translate into something tangible on the race track.

“Everything helps me. Everything that you study helps you with every activity you do in your future,” asserts Duno, who off the track is a well-known education advocate. “Especially engineering here, because at the beginning it helped me understand everything in the car. It’s a bit of an advantage, to understand the mechanical [side] of how the car is working. That is an advantage, to learn in a fast way.”

Her current crew chief, Dave Lenier, Jr., echoed the same sentiments speaking to Frontstretch at Pocono. The tricky triangle is a track Lenier knows a thing or two about; sitting atop the box in 2010, he led Robb Brent to the win in ARCA’s August race there.

“She really gives excellent feedback about exactly what the car is doing,” said Leiner, stoically confident that his learning driver has a steady grip on her heavy machine. “She’d kill me for saying this, but if we could get her to stop trying to interpret what all that means…” he jokingly added.

“[All jokes aside,] she tells us what the car is doing and [when] we adjust for it, the car gets faster everytime.”

That very race at Pocono was a prime example of just that, while also a stern reminder that this is still a development program. Duno’s speeds picked up by over 10 mph over the course of practice and green flag racing, but the end result at day’s end for all that improvement was a 25th-place finish, three laps down in a 50-lap race.

And that’s where that whole perspective thing comes into play again. Duno’s not only able to apply an engineering background every time she hits the race track… it’s also provided valuable grounding at how these efforts today are building towards something tomorrow. This is a driver that again, with a major sponsor in Citgo behind her, has moved from the pristine road courses and international travel of the IndyCar circuit to America’s fourth-tier stock car series, one whose championship is decided not under palm trees but on back country bullrings and dirt fairgrounds.

Unlike many that have come before her, Duno is completely aware of perhaps the most important fact; this year serves as education. This series is where she belongs.

“This is the way to start,” replied Duno when I asked her to contemplate the move that she had made in terms beyond different race cars. “I have to start here, to learn the car, the tracks, the drivers, how to handle being around other cars.”

In a world of Danica Patricks, Dario Franchittis, and so many others that have skipped the very steps and circuits that build stock car racers directly to the big stage, it’s refreshing to hear a story of true driver development taking place. If nothing else, Duno has already proven herself a true student of the sport.

And isn’t that what the future of racing, of anything, is built on?