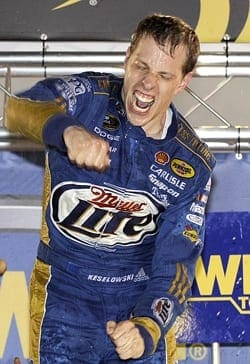 The word of the day is “parity” and NASCAR has seen plenty of it this season. From the season opening Daytona 500 when young Trevor Bayne broke through with a historic win to Paul Menard’s Cinderella story win at the Brickyard, 2011 has been chock full of pleasant surprises. Now with the advent of NASCAR’s new “wild card” system in the Chase for the Sprint Cup, those underdog stories were given a chance to potentially compete for the title in the final 10 races of the season.

Who else are you expecting to see in the Chase? Clint Bowyer? Not likely.

Currently, the two wild card spots are held by Brad Keselowski in 11th (3 wins) and Denny Hamlin in 13th (one win). The only other potential wild card driver in the top 20 is Paul Menard, and he’s barely hanging onto that spot (3 points ahead of David Ragan in 21st).

The way I see it, the top 12 that are in the Chase now are the top 12 who will be posing for pictures following the conclusion of the race at Richmond in a couple of weeks.

“Now wait a minute, Summer,” I can hear you saying. “There are still two races to go! Anything can happen!”

Yes, there are still two races to go… _only_ two races. If there were five races, I might feel differently but as of now the stage has been set.

However, I can see some of you shaking your head, so let me take this opportunity to further elaborate.

Already, the top five drivers—Kyle Busch, Jimmie Johnson, Matt Kenseth, Carl Edwards, and Kevin Harvick—are locked into the Chase. Sixth through eighth basically just has to ride around the next two races and they’ll be safe, while Dale Earnhardt, Jr. (ninthth) and Tony Stewart (10th) need to keep their nose clean.

One scenario that has been tossed around like a game of hot potato is the potential for Keselowski, who has won two of the last four races with a busted ankle, to race his way into the top 10 in points. This would open up the wild card spot that Keselowski currently holds, which would most likely go to Paul Menard (assuming he’ll be able to remain in the top 20).

However, even with Keselowski’s impressive comeback the last few weeks, I just don’t think two races is enough time to make up the amount of points needed to make it into the top 10. While the current 10th-place driver Tony Stewart has struggled lately, there is no reason to think he can’t finish well enough to keep Keselowski at bay. After all, he finished ninth two weeks ago at Michigan, a track with a somewhat similar configuration to Atlanta, with plenty of racing room. Not to mention Stewart won this race last season and has had quite a bit of success at Atlanta Motor Speedway (three wins, nine top 5s and 14 top-10 finishes in 24 starts).

By now, you might be thinking, “Well, what about Dale Earnhardt, Jr.?”

Earnhardt isn’t missing the Chase. Period. Stewart would have to beat him first, and Earnhardt has been running just well enough to secure himself a spot. Somehow the team has mastered the ability to ride around and finish races, so the most popular driver will indeed be in the Chase for the first time since 2008. As far as the championship, that’s another topic for another day.

So what does all of this mean? Well, it means that Keselowski will get in on a wild card spot which makes him the 11th Chase driver and only one more spot left in the Chase field.

As far as the second wild card spot that Hamlin currently holds, that won’t be changing either. Even if Hamlin has a bad race in Atlanta, the closest wild card to threaten his position is the aforementioned Menard back in 20th. Then, Hamlin will race at Richmond, his home track where he has had a tremendous amount of success (two wins, six top 5s, and seven top 10s in 11 starts) and regardless of recent struggles should do very well.

The only driver who could realistically steal that spot from Hamlin is Clint Bowyer, whose only luck has been bad luck for weeks now and will probably lose his 12th-place spot to Hamlin this weekend anyway. Between Bowyer’s contract negotiations and the way the Richard Childress Racing teams have been running lately, maybe that’s for the best.

While I’d love to sit here and say the battle for the Chase at Richmond is going to be exciting and down to the wire, I just don’t see it happening. There is a good reason all 12 Chase drivers are in the position they are now, and two races just isn’t enough to change anything.

However, that’s not necessarily a negative. If everything remains as is, the field will consist of all four manufacturers from six different teams, and several of them have recently picked up the pace which means we could be in for a heckuva battle!

So fear not, race fans. The Chase field may be all but set, but the championship is far from determined. Stay tuned!