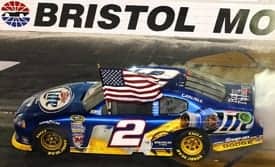 Recent events surrounding NASCAR have oddly paralleled recent events in the news, especially with regard to geological and metrological concerns. Since it’s often said that NASCAR is a microcosm or a reflection of American culture, these happenings fit neatly into the context of where the sport of stock car racing seems headed as we prepare to wrap up the 2011 season and set our sights on what is yet to be come in 2012.

So, anyway, there I was sitting around the house on a cool and cloudy Thursday; it was just about lunchtime, and I was wrestling with an important decision: cheese and lettuce or peanut butter and honey? Just as I was about to reach in the cupboard for the bread–after having settled on the cheese option–I felt tremors underfoot. This was a shockwave very similar to the one that rocked the East Coast and portions of the Midwest. It made me feel unstable, anxious, and somewhat frightened, as if I was about to be swept up by something large and chaotic – something infinitely more powerful than a shifting of the tectonic plates below my feet. Then it hit me: Danica Patrick was formally announcing her full-time (and for real) move to NASCAR. Nevertheless, my lunch continued just it always did, even though the announcement in Arizona was likely to rock the foundations of sponsorship availability and change the career paths of a few Nationwide–and ultimately Sprint Cup–hopefuls.

As soon as the rumbling stopped in the aftermath of Danica Patrick’s not-so-surprising-to-anyone-with-a-pulse public announcement, the glorious state of Tennessee felt the effects of Hurricane Brad. Bristol Motor Speedway was the site of yet another 2011 stellar performance by Brad Keselowski and his Miller Lite Dodge. Keselowski and the “Blue Deuce” frustrated their Sprint Cup competition by out-running them on the race track and out-smarting them on pit road by taking full advantage of gaps between the timing loops, gaining an advantage over more dominant drivers like Jeff Gordon.

By the time Saturday night gave way to Sunday morning, Brad Keselowski had earned his third Cup victory of the season, looking like the Chase contender he will most likely be following the next two races.

That said, the talk come Monday was the question of just how and why Keselowski has become such a force to reckon with in the Sprint Cup Series. How can a race team go from struggling through a mediocre-at-best season and turn it all around to become what could be considered a dark horse candidate for the Sprint Cup title? All this after a widely-publicized, two-way radio meltdown during the spring race at Richmond by Keselowski’s Penske Racing teammate (aka former Cup champion Kurt Busch), and a horrific test wreck at Road Atlanta in early August that earned the Michigan native a life-flight ride to an area hospital for observation of his injured ankle and back. Injuries aside, Keselowski competed at Pocono that week, won the race, and embarked on his current top-three streak, including last Saturday night’s victory at Bristol. So, the curious have asked, what gives? How does a team go from barely there to everywhere over the course of the summer? I believe an answer may be found in a simple review of basic communication theory.

As a professor of communications at a small Midwestern college, I never thought I’d write a column like this (ewwww….), but the method to the Miller Lite team’s madness can be traced to a concept called “groupthink”. While usually considered a negative behavior or response that can adversely affect people who work together to achieve shared goals, groupthink can also have the opposite outcome, that being the focused approach necessary to make groups work more efficiently and result in better decisions. When seen negatively, groupthink leads to an almost-obsessive desire to achieve cohesion and agreement within the members of the group, so much so that the group fails to realistically evaluate the pitfalls and/or errors within their “harmonious” decisions. The end result is flawed decision-making that could lead to disastrous results (a textbook example of groupthink was the “Bay of Pigs” invasion in 1961 – a situation where the policies of one president (Eisenhower) were put into action without question or debate by the next president (Kennedy), leading to the events that ultimately solidified the authority of Fidel Castro).

The concept of groupthink began with the writings of William H. Whyte, an organizational analyst and journalist who wrote the 1956 book “The Organization Man”. In 1952, Whyte referred to the term “groupthink” in “Fortune” magazine, and the theory was expanded upon and explored in great detail in 1972 by Irving Janis, a social psychologist, who wrote a book about the idea and brought it more clearly into national focus. Today, we often use the theory to study the possible problems that might occur when working in small-group, decision-making settings.

So what does all this have to do with the success of Brad Keselowski? I believe it says a lot about why Keselowski and team have enjoyed three wins since Kansas in June, and currently has a four-race finishing average of 1.75; it all has to do with that often-ignored positive aspect of groupthink I mentioned earlier – the idea that an organization of like-minded people can use their cohesive nature and desire for consensus (AND their unwillingness to realistically explore negative outcomes) as a way of making better and more efficient decisions for the good of the group.

It all seems to have begun with Kurt Busch’s radio rant at Richmond. When Busch railed against his team and Penske Racing’s technical director, Tom German, he also suggested his lack of a worthy teammate. The emotional response to such a tirade can go in either of two possible directions: either the people being criticized can stop making a concerted effort for improvement, or they can become energized by the criticism and use it as motivation to try and turn things around. The workers at Penske Racing decided to go in the positive direction and make a serious effort to prove Busch wrong.

And that’s precisely what Kurt Busch’s team did. Not only did Busch regain the momentum he had going back at Daytona in February when he won the Budweiser Shootout, his 150-mile qualifying race, and finished fifth in the 500, but he managed to score his first career road course win with his victory at Sonoma. This came during the summer months when the elder Busch also earned a second at Pocono in June, followed by a third at that same track in July. A little criticism can go a long way toward making changes for the better, which seems to be what came from Busch’s early-season Richmond rant. Similar changes occurred within the Miller Lite team, as well, which also saw a turn-about in fortunes once the summer months began.

Brad Keslowski’s swift shift toward success began, most noticeably, following his win at Kansas. While the “Blue Deuce” team looked better and more confident as the summer progressed, it was – ironically enough – the hard crash while testing at Road Atlanta that inspired a positive sense of groupthink within the No. 2 crew. Just when it appeared that Keselowski might go on injured reserve, he up-and-drove the entire race at Pocono in July. After winning that event, he ran second to Marcos Ambrose at Watkins Glen. Keselowski’s achievements grew more impressive with each passing week, and through it all, his team never seemed to regard his efforts as anything more than what should be expected from a hard-charging Sprint Cup driver. Keselowski even declared during interviews that any complaints he made regarding his aching injuries fell on the deaf ears of his crew; racing hard was what everyone on the team expected from everyone else wearing a Miller Lite uniform. Sacrifice in the name of success trumped Keselowski’s griping and whining over his aches and pains.

And such is the case with a condition of groupthink. When common sense tells you that gambling on fuel mileage (like at Kansas) can seriously hinder your shot at a solid finish, the group ignores the “smart” option and instead rolls the dice with the sincere belief that their supposedly-risky decision is the right decision. Only when Keselowski pulled into victory lane did the team’s strategy look spot on. The same happened last weekend at Bristol when Keselowski and company out-thought their competition on pit road; by playing the gap game and beating the timing loops, the No. 2 Dodge was successful again, earning both valuable points and added respect from fans and peers alike.

What seems to push Keselowski and his team is the power of consensus, the idea that everyone works toward a common goal. All race teams (and all teams in sports, for that matter) try to do this, but some are better at generating a vision of a common goal than others. Jeff Gordon and Ray Evernham could do it. Jimmie Johnson and Chad Knaus have been able to do it for the last five seasons. Having all team members “on the same page”, so to speak, and cultivating an almost-obsessive level of drive within the entire organization can lead to great things. Winning races and running for a championship are the immediate result, as driver and team combine to project a shared vision of what they all want to accomplish. This concept is not unique, nor is it truly complex – shared vision and shared desire for a common goal is at the center of all successful organizations, regardless of what business they happen to be in.

Will the shared vision of Brad Keselowski and the Miller Lite team remain clearly in focus and at the forefront of NASCAR news? It will for at least the next two weeks, until the lineup for the Chase gets settled and our attention turns toward the final ten races of the season. Will another team embrace the positive elements of groupthink behavior? Quite possibly, especially since we’ve seen such behavior from other teams during the Chase. What about after the final ten races and the crowning of a 2011 Sprint Cup champion? Forecasters will keep an eye out for the path of Hurricane Danica as she makes landfall at Daytona Beach in February of 2012. On that, we can all agree.