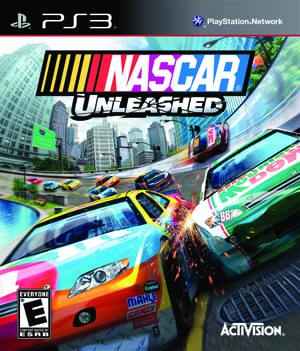 The next generation of NASCAR video game — NASCAR® Unleashed — will launch this fall following an announcement earlier this week by Activision Publishing. Following the successful launch of NASCAR The Game™ 2011, this latest entry into the NASCAR-branded racing series will deliver a unique new experience, according to all involved in the project along with “the fastest and most exciting gameplay yet.”

Available for all the major gaming consoles, including the Xbox 360® video game and entertainment system from Microsoft, the PlayStation®3 computer entertainment system, the Wii™ from Nintendo and the Nintendo 3DS™, NASCAR Unleashed will allow racers to break free from the ovals and explode onto the pavements, beaches and off-road areas of some of the most beloved NASCAR-sanctioned race tracks. The thrill in rediscovering familiar tracks with a new twist gives NASCAR® Unleashed™ a completely unchained stock car experience. In-game NASCAR tracks include: Daytona International Speedway, Chicagoland Speedway, Homestead-Miami Speedway, Martinsville Speedway and Talladega Superspeedway.

“NASCAR has been tremendous in that they’ve given us the flexibility to design different kinds of racing games for their vast audience,” said David Oxford, Executive Vice President of Activision Publishing. “We really wanted to make something electrifying for all NASCAR fans, not just the hardcore. NASCAR Unleashed gives players a new style of speed and excitement, without sacrificing accessibility.”

Other, key features of the new video game include…

*All-Star Pack:* Fifteen of NASCAR’s biggest drivers make their appearance in the game. Dale Earnhardt Jr., Jeff Gordon, Kyle Busch, and Joey Logano are just some of those featured, allowing fans the authenticity of the NASCAR experience so you can race along against your favorites.

*Bumper to Bumper:* Bumping and grinding is the name of the game as players will have to fight their way up to move to the pole position. Opponents won’t make it easy, though, as they’ll be every bit as ruthless on your quest to be the best. Aggressive, calculated opponents armed with their own unique blocking moves can create a challenge for even the most skilled gamer.

*Race to Victory:* The key to winning is the mastery of important NASCAR techniques like drafting and sling-shotting past the opposition. Players learn through experience, then are rewarded for skillful driving with a “boost” power-up that allows them to pull in front of the competition and go for the checkered flag.

*Arcade Action:* Racing is wild, fast and crazy in the virtual world, as players drift around corners and hit massive jumps while trying to avoid being wrecked.

*Racetrack Déjà Vu:* Along with that virtual reality comes the most unique portion of these games, as mentioned above. Players will race on real-life, NASCAR-sanctioned race tracks, making their way across familiar portions only to blast into new areas they wouldn’t expect! Ever dream of Daytona turning from a restrictor-plate only track into one with unexpected twists and turns? Then this game is definitely for you.

*Unlockables Unleashed:* After winning events, players will be rewarded with fun and goofy upgrades that can be used to customize their cars into something unique and outrageous.

All of these features add up into a new, innovative experience sure to capture anyone’s imagination, even those who’ve never watched so much of a lap of stock car racing in their lives.

“NASCAR® Unleashed is a wild and imaginative experience with few real world boundaries,” said Blake Davidson, Vice President of Licensing & Consumer Products at NASCAR and board member of NASCAR Team Properties. “By integrating NASCAR into a high-octane, blindingly fast, home racing experience, we can deliver an entirely unique style of racing that will captivate players and help introduce our sport to new fans.”

Beyond the gameplay’s “no limits, lax physics” rules, an easy-to-read, arcade style Heads-Up-Display will inform gearheads of their race position, current speed, achievements and unlocks. The slick audio and visuals produce some stunning effect to keep anyone entertained; the result is a breathtaking, arcade racer experience like no other. And because the gameplay is not overly complicated, young gamers are sure to enjoy the experience as well.

NASCAR® Unleashed will be available this holiday season on Xbox 360, PlayStation®3 system, Wii and the Nintendo 3DS. The game is rated E for Everyone by the ESRB. For more information, please visit “www.Activision.com.”:http://www.activision.com/